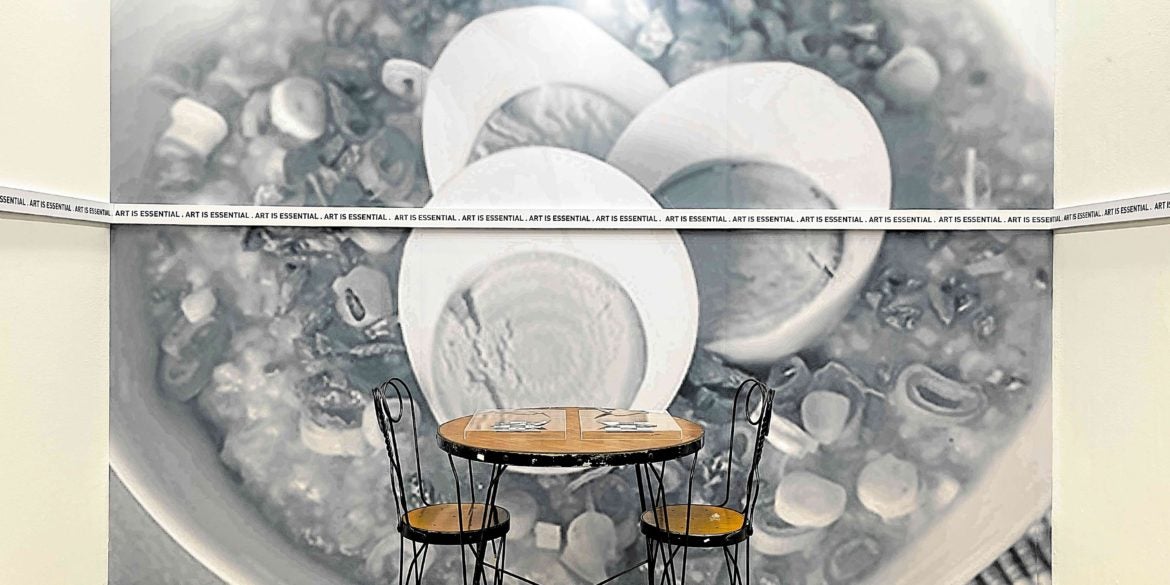 Homes are built column-less with double-slab technology which gives residents an undisturbed space and the option to change their units as often as they see fit, without disrupting the neighbors and the structural integrity of the building.

A huge mural-sized photograph of lugaw, the poor man’s rice porridge, is splashed across the wall. Below it are a vintage table and two chairs. On top of the table and on either end of the two chairs facing each other are the obligatory metal spoons and forks framing the “plates,” which are actually chessboard-style illustrations of fish, bread and other food items.

Nearby, on another wall, hangs a framed drawing of lugaw; it is flanked by two chessboard drawings of food items. Below them are a table where there’s a familiar sign, “Magbigay ayon sa kakayahan, kumuha batay sa pangangailangan.”

The art installations—the first “Lugaw,” and the second “Community Pantry”—are among the “Images of the Nation” that Abe Orobia has recorded while locked down at home during the pandemic.

Mounted at the NCCA (National Commission for Culture and the Arts) Gallery in Intramuros, “Images of the Nation” is both whimsical and coruscating.

The installations are obviously satiric commentaries on two very recent lockdown-related ruckuses: the first, when barangay authorities in Bulacan accosted a man delivering a late-night lugaw order and closed down the local lugaw shop for allegedly violating curfew, declaring that porridge was not exempt from the regulation because it wasn’t “essential”; and the second, when a civic-minded gesture by a Quezon City resident of putting up a “community pantry” for the poor was “red-tagged” by Armed Forces of the Philippines and Malacañang spokespersons.

The two installations dominate the exhibit hall because of their size and currency, but they’re just the headline to a show revolving around Orobia’s original chosen theme: “the plight of the common folk and the struggle of the downtrodden for social justice.” This was the theme he submitted when he applied for an exhibit grant. His show was scheduled for the NCCA Gallery’s 2020 calendar, but the pandemic got in the way.

“He was planning to include drawings of farmers, laborers and fishermen wearing the artist’s signature motif of crumpled paper dresses depicting temporary shield and survival, symbolizing both weakness and strength, vulnerability and resiliency,” recalled NCCA Gallery curator Delan Robillos.

“In the beginning, Abe did not want to be political,” said Robillos. “But with what has happened, not to use his art as an expression of social relevance and an instrument for reform in the midst of social inequality and injustice would be both unnecessary fiction and tragedy.”

Eleazar Abraham Orobia, or Abe to the art community, comes from a family of artists. His father is veteran painter Rogelio “Maestro” Orobia from Bicol. His mother, Fe Gubaton Luna, is a great-granddaughter of Juan Luna. He is a graduate of BS Fine Arts in Painting at the University of Santo Tomas, where he teaches. He also lectures at the College of St. Benilde and holds art workshops for the Ayala Museum.

The pandemic has given Orobia the time to reflect on his art and craft. The vibrant prepandemic Philippine art scene was brought to a standstill by the emergency; all cultural activities stopped. (The art scene remains more or less in limbo.) Artists were pushed into survival mode, since the arts and entertainment sector has been classified by government as “non-essential.” For many of Orobia’s colleagues in the art world, the pressing issue is that art, deemed non-essential, is actually their means of livelihood. It’s essential to their survival.

“Visual arts and intangible cultural heritage, such as religious rituals, literature and communal dances, practices, and observances, provide healing or therapy to the people while adjusting them to the new normal. And that is why the NCCA had also instituted its Arts for Therapy program, a ‘posttraumatic’ program to heal those who might have been psychologically affected by the pandemic.”

Orobia said that during the pandemic, he found out that “artistic research” was necessary for audience development under the “new normal”; it was likewise necessary to determine society’s conduct toward art and culture in times of crisis.

He added that COVID-19 accelerated the digital transformation, and while creative and cultural work was “people-oriented,” requiring research and studies, “we all had to learn how to create experiences digitally and to a certain degree, this both saddened and challenged me.”

Locked down in a work-from-home environment, Orobia continued his art through sketching and drawing, and documented the process via videos. He adapted to an “alternative teaching modality,” telling his students to consider that “what is happening at home can still have an impact on our art and culture consumption.”

By bearing with the pandemic, the 37-year-old artist said he developed “hope muscles.” When NCCA reset the grant to this year, he stuck to his guns. His works—felt tip on watercolor paper and white ink on black paper—are accompanied by his narratives written in prose. His documentation and archival videos are also showcased.

“Humanity has been shaken by COVID-19,” Robillos writes in his curator’s notes. “Suddenly, words like social distancing, health protocols, front-liners, and ayuda have become part of daily vocabulary. Some of these words are visible in the images of ‘Dalanging Medikal,’ and ‘Sugod lang! Laban lang!’ Physicians, nurses, and other medical personnel wear their full personal protective equipment or PPE as a temporary shield in the fight against this invisible war.”

The most striking images are Orobia’s depictions of small farmers and fishermen and even cultural communities suffering from the crisis: “Daloy,” “Kinartong Pangarap,” “Nakayuko sa Lupa,” and “Lupang Tinubuan.” But the drawings aren’t grim or pessimistic. Like him, ordinary Filipinos have developed their own “hope muscles.”

In fact, Orobia extends the hope to his installations.

“Abe, too, duplicated the pantry as part of a critical narrative in his exhibition as if to say, to criticize is to care,” said Robillos. “Although Orobia may indeed seem to be critical at times, he has nothing but praises and pride for what he calls a great country and how his countrymen—the everyday Filipinos—are dealing with this pandemic. These, for him, are the images of Filipinos he wants to keep and remember.”