Before he was ‘P-Noy’: A journo friend remembers | Lifestyle.INQ ❮ ❯ 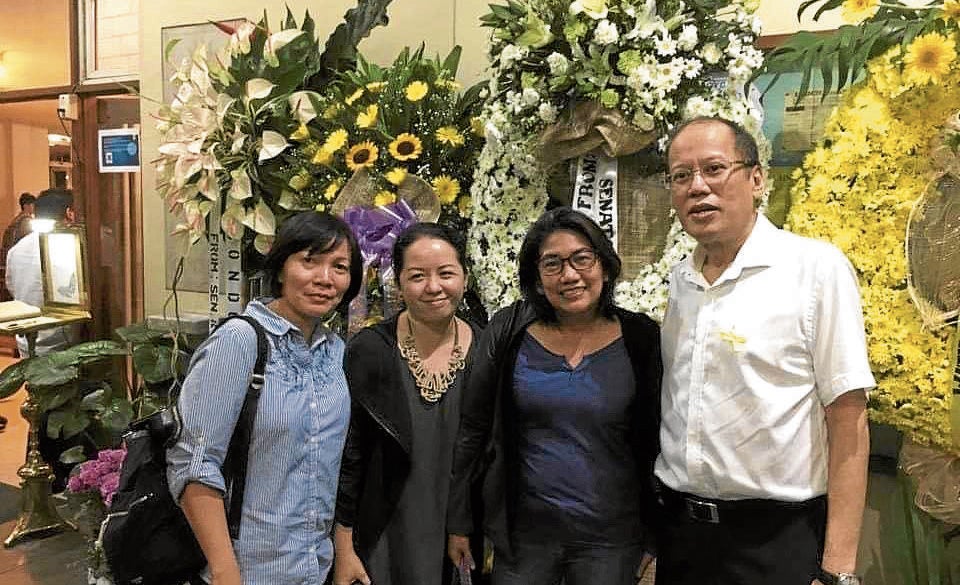 The author (left), with journo friends and Aquino at a wake— the last time they met

Before he was ‘P-Noy’: A journo friend remembers

That he died peacefully in his sleep is perhaps a testament to how he didn’t like fuss, it was easy to forget who he was

The first time I saw Benigno “Noynoy” Aquino III in person was at the Batasang Pambansa session hall in the morning of the first day of the 13th Congress in 1998. He was among the first-term congressmen, many of them offspring of political families, so there was a lot of buzz and interest surrounding them.

I was seated in the media gallery (aptly called “peanut gallery”) with fellow reporters on the lookout for stories when he sauntered in, staring up at the bright lights on the ceiling, seemingly a picture of a child in wonder.

But that was one his charms: He had this childlike nature about him especially when he was comfortable—and not carrying the burden of his name or the problems of the country that expected so much from the scion of democracy icons.

The late Joker Arroyo, his mother’s executive secretary and who was then a Makati congressman, would later introduce him to the reporters covering the House of Representatives—not that Noynoy needed any introduction.

Joker was a habitue of the media center himself, regularly passing by on his way to the session hall, mostly to annoy reporters, teasing them for being out-scooped or criticizing their reports (his cariño brutal).

Shortly after, Noynoy would be a constant visitor, too, catching up on the latest Batasan chika or sometimes just winding down once the last of the plenary aides had switched the lights off and locked the front doors after that day’s session.

Many perhaps have forgotten that before he became senator, and later, the country’s 15th president (when he became more known as “PNoy”), Noynoy was a congressman representing the second district of Tarlac. This was where he started his political career—at the age of 38. This was the Noynoy I knew, before he was surrounded by the PSG (Presidential Security Group) and layers of protocol.

Like any freshman congressman, he was eager to learn and quietly did his homework, for example, surprising reporters during interviews for being knowledgeable about provisions of a bill or committee report under discussion, no coaching from his staff needed.

He was never one to issue statements on every national issue that could get him in the news, or a daily press release that littered the media center and often was used as scrap paper by journalists when they needed to write a note in haste.

Obviously, he didn’t need to do anything to get the media’s attention, but also because, as his sister Pinky said in the family’s press conference last Thursday when they announced his death, he chose to serve quietly.

That he died peacefully in his sleep on Thursday morning is perhaps a testament to how he didn’t like fuss and was so down-to-earth, it was easy to forget who he was—or who his family was. He would talk about them fondly and share funny anecdotes, like any friend would tell you about their parents or siblings.

Once at Times Street, his mother suddenly came out apparently hearing that some of her son’s journalist friends were there. We went into panic mode not expecting the former president to grace us with her presence—she apologized she was in her house dress as he introduced us to his “Mom,” like she was your kapitbahay’s mother.

But that was how unassuming he was, enjoying simple things, like that al fresco lunch we had at the now defunct Beach House at the UP Sunken Garden. Chiz Escudero (his batchmate at the House), being the typical Isko, had the time of his life teasing Noynoy that they didn’t have this—including inhaling the smoke from the barbecue pit while you eat—in Ateneo.

Like a kid experiencing a rare treat, Noynoy was so happy when a dirty ice cream vendor ambled by and treated everyone to dessert. He couldn’t forget that lunch that he often suggested to eat there again.

This was how he would remember and appreciate things we’d otherwise consider trivial.

When I moved to Bangkok years later, he asked his friend and a relative to call me on separate occasions because he wanted them to buy dri-fit shirts similar to the one I gave him once as a Christmas gift, and which he found comfortable to wear while on the campaign trail for the presidency in 2010.

Noynoy Aquino was many things to different people, just as people were different things to him. He liked to call his journalist friends “Ate” or “Kuya,” or in my case, his “batchmate,” even if we were younger than him.

We fondly called him “Kuya”—like the older brother that he has been to the country until, in 2010, he was called to serve the Filipinos his father died for.

But just like his “no wang-wang” policy, Noynoy left in a characteristically lowkey manner—no fuss, no trappings of power. Sadly, a value that is lost on many today.

Rest in peace, Kuya, and thank you for your service.

The author is assistant editor of Inquirer’s Opinion section.