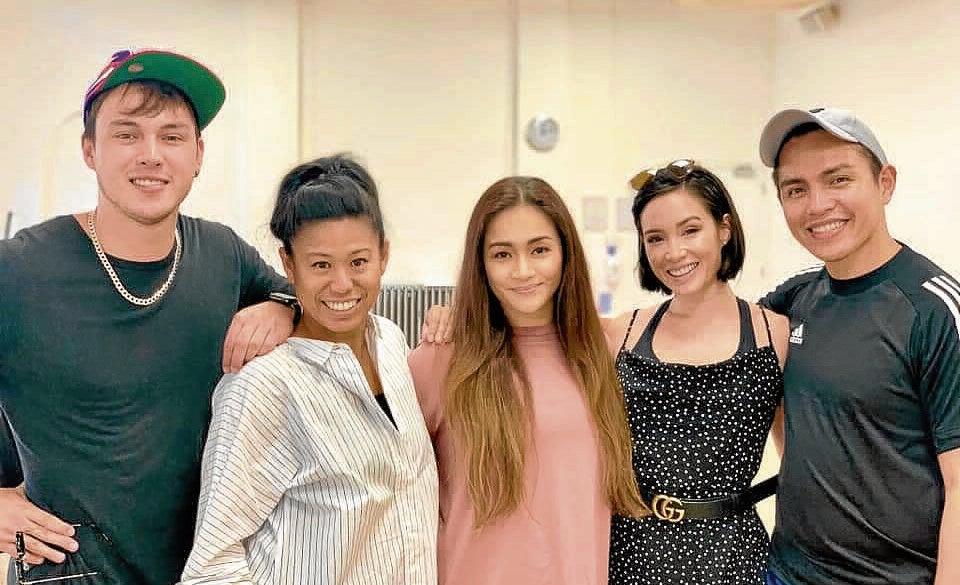 ‘I am proud that this role is a strong representation for Asians,’ says the actress, who will be only the second Filipina to perform the role abroad

A-list singer-actress Joanna Ampil has landed the plum role of Bloody Mary in a new and reimagined production of Rodgers and Hammerstein’s musical “South Pacific,” set to open Chichester Festival Theatre in the United Kingdom on July 5.

The show, directed by Daniel Evans, will run until Sept. 4. Ampil is the second Filipina in decades—after Sheila Francisco—to play Bloody Mary abroad, in the role made famous by Juanita Hall in the stage and film versions.

The theater festival is an important annual event in the United Kingdom, held in the historic cathedral city and parish center of Chichester, a two-hour train ride from London.

“South Pacific” is based on James Michener’s 1946 book “Tales of the South.” It was made into a Broadway musical in 1949, starring Mary Martin and the operatic basso profundo Ezio Pinza; in 1958 the play became a Hollywood movie with Mitzi Gaynor and Rossano Brazzi in the title roles.

One had read the novel—or a collection of stories—shortly after seeing the Hollywood version. The book wasn’t bad but one was really more enchanted with the musical, music being what it is—especially a musical touched by the genius of Rodgers and Hammerstein.

“South Pacific” is one of the finest of their musicals, second only to “Carousel,” and as popular and beloved as “The Sound of Music.” It is set in a tropical paradise, a group of islands colonized by the French, and now being fought over by the Americans and the Japanese (who do not appear in the show). For this is World War II.

The play has two love relationships; one ends happily, the other sadly. In the now tense island is stationed a nurse, Nellie Forbush (Gina Beck in the new production), who falls in love with French planter Emile de Becque (Julian Ovenden) who, unbeknown to her, is a widower once married to an islander. He has two children who are, of course, half-French and get to sing a cute little ditty of love: “Dite moi pourquoi la vie est bel-le, dite moi pourquoi la vie est gaie, dite moi pourquoi chere mademoisel-le … vous aime.” (Tell me why life is beautiful, tell me why love is gay, tell me why, dear lady … you love me).

Another important character is the dashing Lt. Joe Cable (played by John Kerr in the movie, and by Raymond Launchengco in the Repertory Philippines production years ago), who gets to sing the beautiful “Younger than Springtime.” He is enamored of the pretty daughter of our Bloody Mary, Liat.

Eventually both Nellie and Lieutenant Cable (Rob Houchen) realize that they are the products of a racist culture: “You’ve got to be taught to hate and fear, the people your relatives hate, the people whose eyes are of a different shade, you’ve got to be carefully taught …”

Thus, “South Pacific” speaks out against racial discrimination, and gains significance in view of the attacks against Asians in the United States today.

The real Bloody Mary was believed to have been a Vietnamese woman from the Tonkin Gulf who was brought to the Pacific island by a French planter, probably the prototype for Emile de Becque, and she lived up to the age of 102. In the show she is a vivacious south Pacific islander who trades with the US marines.

We first see her sashaying around, waving her pearls, laughing for all she’s worth, as she is being serenaded by the marines: “Bloody Mary is the girl I love …” She loves the tribute although it is sometimes double-edged: “Her skin is tender as a baseball glove …”

Her other big moments come when she sings the haunting “Bali Hai” and the cheerful “Happy Talk.” Her exit from the play is dramatic. She had wanted her daughter to marry an American officer of means but the girl was rejected because she is, well, a native. “A woman of color,” as the phrase goes today.

Bloody Mary is a supporting character but an important one. She appears in only a few scenes but the actress playing her has to make every scene count. With her impressive record in theater, films, TV and the recording industry, Ampil is expected to render full justice to the role.

On the world’s stages she has appeared in “Jesus Christ Superstar,” “Les Miserables,” “Rent,” “Cats” (in Manila and just recently in South Korea), “The Rebel” (Ballet Manila), “Miss Saigon,” “West Side Story,” “The Sound of Music” and other musicals; as Candida in the award-winning film “Ang Larawan,” a musical version of Nick Joaquin’s classic “A Portrait of the Artist as Filipino,” and in various television series in Manila.

In an exclusive online interview from London, the celebrated actress-singer said: “[Director] Daniel encouraged everyone to do some research and create a backstory for our characters. I did a lot of reading history and research on Tonkinese immigrants to support my character sketch of Bloody Mary. It’s a wonderful learning process, especially enriching your knowledge about the realities of war and what went on in that part of the world during that era.”

She added, “Bloody Mary’s motherly trait was also compared to Mother Courage of Brecht. We are exploring her different traits as this rare and strong presence on the islands, a mother to all, a successful businessman, a performer, a person who enjoys languages and ultimately a mother to Liat who wants nothing more than to give her child the best future she herself never had. She is presented as the smartest woman on the island.”

Thus the character will be reinvented, using “the whole pidgin English, the mouth stains from betel nuts, the peddler look as a put-on she invented as a tactic for a successful business.” There will be new arrangements for her songs, in keeping with the moods of the characters. The production will also be filmed for streaming.

Aware that outstanding thespians like award-winner Juanita Wall and our very own Sheila Francisco have performed the role, Ampil exclaimed, “they are indeed wonderful in the parts but I don’t think we can all be the same since we’re different artists with different and diverse backgrounds. Also, like what Daniel said, this is a complete reimagination of the show. It will be presented in a new light and it’s best not to be influenced by other productions and versions from before—without taking away the fact that the older versions were also successful.”

What’s it like being an Asian performer in London? Any instances of discrimination against you and others?

“I am aware that prejudice and racism still exist,” she observed. ”However, I never felt any kind of discrimination against me within the industry in any way. I have been given several roles in the past that are usually played by Caucasians and I’ll always be grateful for that. With Bloody Mary, I am proud that this role is a strong representation for Asians and I am glad to say that I am also sharing that responsibility with other Filipinos who are in the show with me.” —CONTRIBUTED INQ