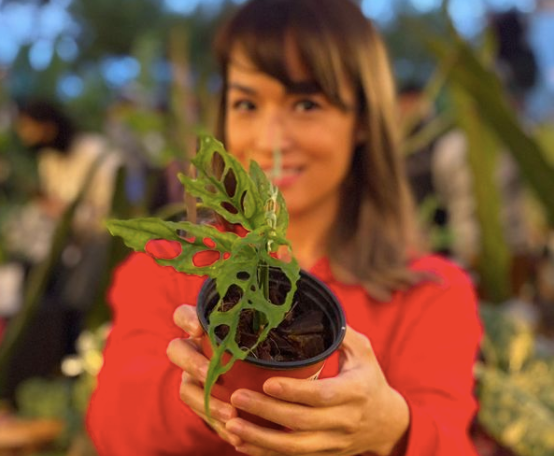 Actress and certified plantita Aubrey Miles was so enamored with one rare plant that she bought it despite its price tag.

Miles spoke about her obsession with the plant in her Instagram post yesterday, June 28, where she showed some photos of it.

“Another plant goal this year. Arid and Aroids can really make your dream plant come true,” the actress said. “I have to be honest, I’ve been asking around [Philippines/abroad] for this OBLIQUA for [quite] sometime now. Looking for a good price because if you’re a plant person you know how much it [costs]. Oh well, but why look far here’s arid and aroids so close to me, [hello].”

She then recalled how excited she was upon setting her eyes on her longed-for plant for sale. Upon the first day of seeing it, she inquired about it and had it reserved. She decided that if no one buys it up to a certain time, she would purchase it herself. Later, one pot of it was sold, until only one pot was left. At this instant, Miles decided to make the purchase. The price: a whopping P250,000.

“I’ve asked around and found it to be 350k to 450k and higher. It’s obliqua peruvian, one of the best forms out there. Anyway with collecting plants [really, it’s] never ending. We buy and sell so we can afford our plant goals. Just sharing,” she said.

This is not the first time that Miles bought a very expensive plant. Last year, she bought a variegated billietiae for P300,000. JB

Aubrey Miles loves being pregnant at 40, not worried about getting back into shape