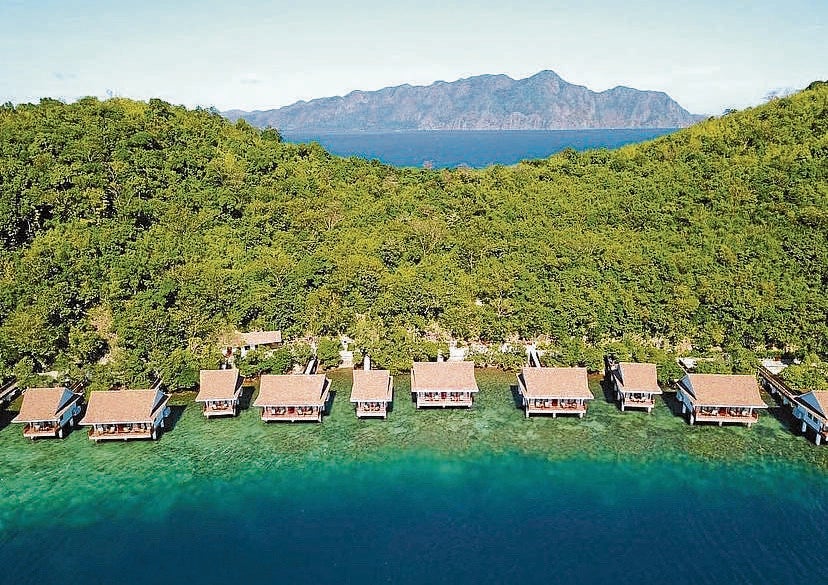 A row of Setir villas on the water, soon to be powered by solar panels —@SUNLIGHT_ISLANDRESORT INSTAGRAM

Ryna Brito did not only put structure in their family’s island retreat in Culion, Palawan; she also launched a charter airline for point-to-point travel

Ever since she stepped in as the chief executive officer of Sunlight Eco Tourism Island Resort (Setir), Ryna Brito has not only put structure, design and more sustainable efforts in their family’s 18-hectare island retreat in Culion, Palawan, but she has also launched a domestic charter airline company that allows for point-to-point travel, which is ideal for safer travel during a pandemic. She did all these before she turned 26.

When she was only 8, Brito told her dad that she wanted to run a resort. Growing up, she decided she wanted to continue her parents’ legacy because they started their businesses from scratch, “and those came from so much hard work,” she said.

And so after finishing Business Administration studies at SP Jain School of Global Management in Australia, she tried her hand at some of their companies, from retail to elevator mechanics. Though interesting, those didn’t quite fit like a glove. But hospitality, she enjoys sincerely.

In the end, the now 27-year-old got what she wished for when she was young.

She took the reins of the resort three years ago and was immediately besieged with so much work, even as Setir has been up and running since 2014.

“My dad built this beautiful resort but it had no procedures,” she said. “He didn’t have any sense of interior design, too, so I made a lot of changes.”

In terms of managing the staff, she practices work-play balance and she wants her people to live this ethic as well by finding time to do recreational activities, such as beach cleanups in between resort management.

“It wasn’t a smooth transition, but what I learned in the past three years was that it was never going to be smooth. There will always be problems. You just have to tackle them.”

From the way things have been running, she has done a pretty good job. Each of the 55 Maldivian villas (99 rooms total) that sit on top of clear, coral-studded water is decked with Filipino-theme interiors and furniture made on the island, and a calming unobstructed ocean view.

There are 10 restaurants available, some catering to small groups in private rooms, including one exclusive kitchen where guests can shop for their own ingredients in their F&B’s pantry and cook them on their own, guaranteeing that sought-after isolation.

They also have a wine cellar, their own crab and oyster farms, as well as aquariums that house a bevy of live seafood, such as sea mantis, lobsters and spider shells for paluto-style dining.

And if three white-sand beaches and a pool aren’t enough for a leisure holiday, they also have a KTV villa, nearby diving and scuba spots that allow a visit to World War II shipwrecks and healthy coral gardens, a playground for kids, bikes to explore the grounds, a butterfly sanctuary and a yacht for sunset cocktails.

In the works are a helipad, firing range, organic farm and solar panels to provide energy for the villas.

All these developments are inspired by Brito’s own trips. The same goes for the introduction of Sunlight Air, a massive endeavor she set up on her own.

“In the past eight years, I had to travel so much. And I’ve had my fair share of airport delays. I wanted to bring a comfortable and convenient level of tourism to the Philippines but make it accessible still. With Sunlight, you get VIP treatment and you get more for what you pay for.”

Being in a travel bubble has always been their initial business model—even before the pandemic. Their three ATR 72-500s can fly not only to Busuanga, where guests will then be whisked off by a van and a boat to bring them straight to Setir, but also to underserved destinations in the Philippines.

All safety protocols are in place, including the cabin, which is arranged in such a way that passengers are at a safe distance from each other. With Sunlight Air, guests check in at a restricted booth, wait in lounges where the number of people is kept to a safe maximum, and board the plane through a hangar, not a crowded airport.

COVID has definitely kept Brito on her toes. “With the airline business, the most challenging part was writing all the procedures and then rewriting all of them because of the pandemic. We were back to square one,” she said.

“If you keep wondering when stress is going to be over, it’s never going to happen, and you’ll just stress yourself out even more.”

For some revenue to come in, they decided to offer and deliver food around Coron town. Setir also began welcoming day tours. “We had to be creative in balancing out the numbers as much as we could. It would never be break even, but at least there was something coming in,” said Brito.

Travel may have been down the last couple of months, but her hope remains up. “People want to travel so badly. Right now, I’m more positive with the two businesses. Our business model with the airline and resort together is so attractive in the middle of the pandemic because we offer point-to-point travel—from one bubble to another bubble. We make sure that they feel safe.”

For the 27-year-old who built an airline and made an island resort a lot more livable in three short years, that promise couldn’t be any less credible. INQSunlight Eco Tourism Island Resort is at Barangay Baldat, Culion, Palawan. Travel Warehouse Inc., tel. 0932-8821708, 0917-3131217.