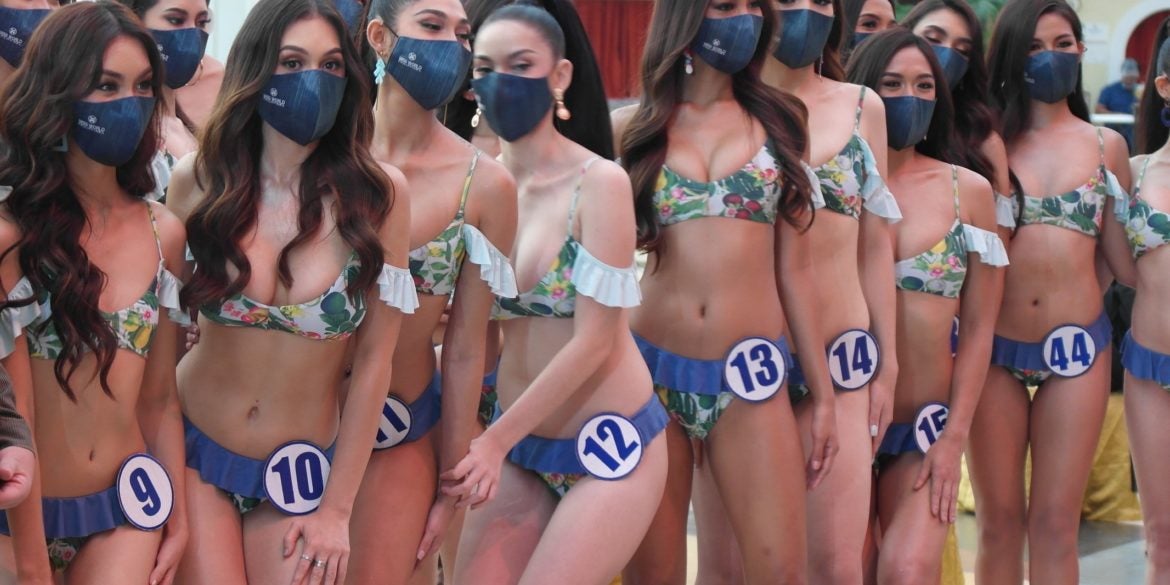 The 2021 Miss World Philippines candidates pose for their group photo while wearing face masks to adhere to the health protocols imposed to arrest the further spread of COVID-19./ARMIN P. ADINA

Miss World PH pageant to have both livestreaming, delayed telecast

MAKATI CITY, Philippines — After being forced to postpone its 2020 competition because of the COVID-19 pandemic, the Miss World Philippines (MWP) pageant is back this year, with the final competition available in both online and off-line platforms, adapting to the shift to digital media consumption that saw a spike during the global health crisis.

“You may watch the Miss World Philippines coronation night live via ktx [paid streaming platform], and it will have a delayed broadcast on GMA7,” MWP National Director Arnold Vegafria said at the presentation of the pageant’s 45 official delegates held at the Cove Manila club of Okada Manila in Parañaque City on July 15.

The development came as the competition is in the heat of preliminary competitions which will help determine who will advance to the semifinals.

As in its previous editions, MWP adopted the international Miss World pageant’s format of conducting “fast-track” events, whose winners automatically advance to the next stage of the competition.

MWP General Manager Arnold Mercado told the Inquirer at the event’s sidelines that the number of fast-track events rose because of the desire of several sponsors to grant semifinal spots to a greater number of aspirants.

“There will be 25 semifinalists. So we will be choosing 15 more ladies who will join the 10 fast-track winners,” he said.

But what will happen if a candidate wins more than one fast-track event? Mercado said this will just increase the semifinal slots for those chosen by the selection committee.

“Even if multiple ladies win several fast-track events, we will still have 25 semifinalists announced on the coronation night,” he added.

The relatively young pageant, established in 2011, made up for its “pandemic pause” by enlisting its record number of aspirants this year, and the proclamation of up to eight winners during the finals.

The media release did not mention the Miss Multinational Philippines crown, but Mercado told the Inquirer that there is a possibility that it will still be included in the list or titles up for grabs.

“It will depend on what updates the international organizers will provide before our coronation night,” he explained.

Yet to see action on the international arena is 2019 Miss Multinational Philippines Isabelle de Leon, who was supposed to fly to India earlier in 2020 to compete. However, the COVID-19 pandemic compelled the global tilt to postpone its 2020 edition several times, until it announced an indefinite suspension of the competition due to the health crisis taking place in the South Asian nation.

All of the 2019 queens who went to their respective international assignments earned distinctions. Michelle Dee advanced to the Top 12 of the Miss World pageant, while Kelley Day finished second in the Miss Eco International contest. Katrina Llegado was proclaimed Reina Hispanoamericana “Quinta Finalista,” while Mary Daena Resurreccion finished in the Top 5 of the Miss Eco Teen International tilt.

Miss Tourism Philippines Glyssa Perez’s crown did not come with any international assignment.

And while the Miss Eco International pageant was not able to conduct a competition in 2020, its young counterpart Miss Eco Teen International tilt staged a contest in December. The Philippines scored its first crown through Roberta Tamondong.

The Laguna lass was enlisting for MWP’s 2020 pageant, but garnered her first international mission instead when the national pageant organization appointed her as the Philippines’ representative to the competition in Egypt.

MWP just recently acquired the Philippine franchise for the Miss Supranational pageant previously held by the rival Binibining Pilipinas pageant, and Vegafria said the challenge is to look for “the most prepared candidate” because the next competition is slated for August in Poland.

“She will only have one week to prepare, so we need to look for the girl who is the most ready,” he shared.

And as the franchise holder for the Mister Supranational pageant as well, Vegafria said he will reveal the country’s official delegate during the Miss World Philippines coronation night. “We already have a contestant,” he said.

The 2021 Miss World Philippines coronation night is set to take place at the grand ballroom of Okada Manila in Parañaque City on July 25.