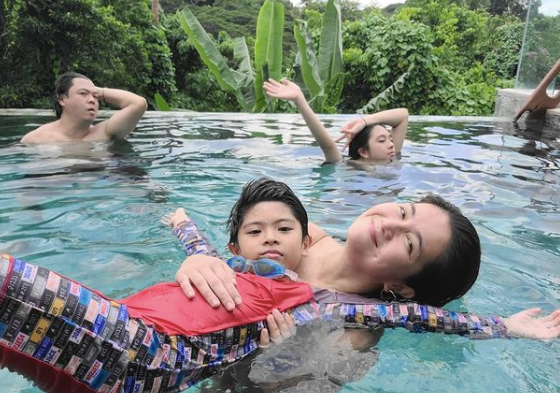 Actress Dimples Romana accidentally learned something “simple [and] sensible,” and ultimately valuable, from her son Alonzo’s prayer recently, which she shared with fans.

“A few weeks ago, on one of our prayers before sleep, Alonzo’s prayer struck me. I knew it was the Lord’s way of speaking to me to slow down, live in the moment and see more clearly what truly matters in life,” she said via her Instagram page yesterday, July 19, where she also showed her family enjoying some pool time. “He asked me, ‘Mom, how do we bring all these things we have and all the things we own when we all get to heaven one day? Will it all fit in the car?'”

Romana, who is part of the upcoming ABS-CBN TV series “Viral” which also stars Jake Cuenca and Charlie Dizon, was left speechless. After recovering her composure, she told her son that it is not possible to bring all material things to heaven.

“We just travel to heaven on our own, no nothing. Just our souls and maybe if we’re lucky we get to be reunited there as a family… I will just have you, dad and Ate. And he’s like… ‘Ohhh, its OKAY MOM we will still be happy because we have EACH OTHER,’” she narrated.

With that, Romana realized that “Alonzo, with his bright, simple, sensible mind reminds us that we all have dreams for our family,” but some of the most important things that her children cherish can be the simplest too. She reflected that “how much money you amass over time” should not preoccupy anyone to the “extent that it will be the only reasons you wake up everyday and never to the extent that it will rule you and your life.”

Romana, who has worked hard for her children, realized after hearing Alonzo that her kids want more time with her, compared with being away from her even for work.

“They are at their happiest when WE ARE TOGETHER. Sapat na sa kanilang kumakain kami sabay sabay araw araw, nakakapagaral sila at paminsang nakakapagbakasyon,” she said. (It’s enough for them that we eat together everyday, that they are able to study, and that they get to go on occasional vacations.)

She added, “So here’s to working hard but never forgetting to LIVE.” JB