When a National Scientist says ‘no’ to reclamation | Inquirer Lifestyle ❮ ❯ 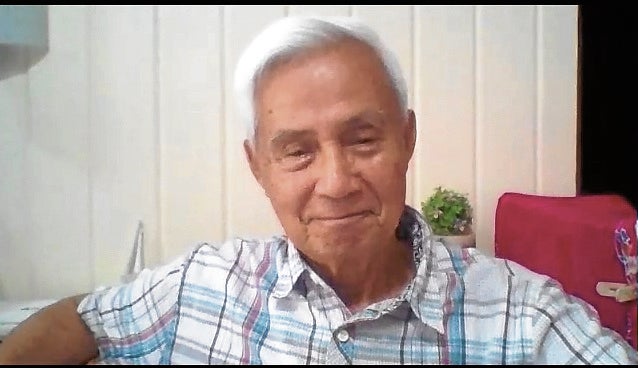 Dr. Angel Alcala on Zoom from his Dumaguete home: “People forget their commitment to the protection of biodiversity.”

When a National Scientist says ‘no’ to reclamation

Dr. Angel Alcala takes an expert’s stand on the proposed Dumaguete coastal project—and it would be foolish not to heed him

In the 1990s, I was part of a small crew doing underwater videos on Apo Island in Dauin, some 30 kilometers from Dumaguete City, the capital of Negros Oriental. Here, the fishermen were living good lives because of an ingenious way of managing this renowned fish sanctuary: a small portion was protected as a no-take zone, where fishing was not allowed. Instead of depriving the locals, however, the set-up allowed the protected area to overflow with fish that spread all over the rest of the fishing grounds.

“A marine protected area (MPA) conserves fish and improves fisheries in an area at the same time,” says Dr. Angel Chua Alcala. “Any place with an MPA will have increased productivity. Apo Island is about 140 hectares. The protected area is a little more than 10 ha, but the effect is to help the MPA produce some 15-20 tons of fish per year. We call that the spillover effect—and that’s only the adult fish. Living organisms on the reef lay eggs, which are carried by currents to the entire island of Negros, and there the species thrive, grow and support the fishermen of Negros Island.”

It was only years later that I learned that it was Alcala—National Scientist, pioneering marine biologist and conservationist, and father of MPAs in the Philippines—who originated the idea, and instituted the concept during his time as environment secretary under President Fidel V. Ramos in 1992-1995.

According to this “25-Percent Concept,” if only 25 percent of a community fishing area is left alone for two years, the fish population could grow and fill up the remaining 75 percent. MPAs have since become critical to marine conservation as well as livelihood protection all over the Philippines and even the world.

It’s quite the irony, then, that Dumaguete, Alcala’s home city and an important seat of marine studies and conservation in the country, thanks to the Silliman University Marine Laboratory he cofounded in 1974 (actually renamed the Dr. Angel C. Alcala Environment and Marine Science Laboratories in 2009), is seeing its coastal environment under threat.

As reported by Inquirer’s Jhesset O. Enano last July 12, a proposed P23-billion, 174-ha reclamation area along Dumaguete’s shoreline is being planned, a partnership between the city government and construction company E.M. Cuerpo Inc. It includes a “mini city” with “shopping malls, condominiums and business establishments.”

Many in the city of academics, business people, tourism operators and locals who simply love their beautiful boulevard are up in arms, but it was understandably the statement signed by Silliman University’s experts on marine biology, the environment and other fields—Alcala, university president Dr. Betty McCann, Dr. Ben Malayang III, Dr. Hilconida Calumpong, Dr. Rene Abesamis, Dr. Enrique Oracion, Dr. Janet Estacion and Dr. Robert Guinoo—that has carried significant weight.

Based on the qualifications of the people who signed it, the statement has also rendered the latest comment of Dumaguete Mayor Felipe Remollo last July 17—that those who opposed the project were “not properly informed”—false and, well, misinformed.

“We oppose building an island in front of Dumaguete,” opens the statement, going on to specify how the project will destroy ecosystems that support small-scale fisheries, and how the scale of the project would require destructive dredging of the seafloor. Most significantly, it notes how four legally established MPAs off the barangays of Bantayan, Lo-oc, Mangnao and Banilad will be negatively impacted, or “may even cease to exist.”

“If the project pushes through, Dumaguete City will renege on its commitment to do its part in marine conservation for the province, region and country. It will be a disgraceful act, considering that the MPA movement in the Philippines, known throughout the world for its successes in the past 40 years, has its roots in Dumaguete City at Silliman University.”

“Such a project will bury corals, seagrass beds and sediments,” says Alcala in a Zoom interview from his home in Dumaguete. He had just received his second dose of COVID vaccine that morning, and was looking none the worse for wear, still dapper at age 92 in his checkered polo shirt.

“I’m sorry, sometimes I have a hard time explaining things,” he apologizes—but everything he said made sense.

“These are ecosystems that boost fisheries and, at the same time, improve tourism facilities for people to see. Many fishermen will lose their livelihood, because MPAs actually export fish outside to the fishing areas. We have shown that in our research.”

Proponents have claimed that the project, which was reportedly planned without any local consultations or disclosures, will help reduce water pollution, Alcala notes. “But that is not the proper solution. What pollutes water is people on land throwing their waste in their backyards, with no proper control of domestic waste products. There are technologies that can improve the handling of waste materials.”

Further, any detrimental effects of the reclamation will not be confined to Dumaguete alone. “The sea has permanent currents flowing from the Tañon Strait and the Bohol Sea, along the coast of Negros, into the Sulu Sea. So what comes out of this project could damage other places, as well, and not just Dumaguete.”

Alcala rues the fact that despite the Philippines being an archipelago, some people still act without consideration of the oceans that surround us. “There are groups very dedicated to marine conservation, but others also don’t mind it because they don’t see the importance of MPAs. They do not realize that everything in a marine ecosystem contributes to the productivity of the ocean, and we depend on the ocean.

“Our efforts, which began as early as 1975, have resulted in more than 1,600 MPAs in the country, but not all are working, because people forget. When the people who set up an MPA pass away, the people who take over destroy it. It’s a psychological problem, a social problem, a behavioral problem. They forget their commitment to the protection of biodiversity.”

Connection to the sea

Alcala knows whereof he speaks, in every possible way. He was born in Cauayan, Negros Occidental, the son of a milkfish farmer, establishing quite early his connection to the sea. He earned his undergraduate degree in biological studies from Silliman University in 1951 and became a teacher there.

Interesting enough, his first field of interest was herpetology, the study of amphibians and reptiles, and he worked with Walter C. Brown, a visiting professor and biologist from Stanford University, until Alcala himself got a Fulbright scholarship for his master’s degree at Stanford, and later, for his doctoral studies.

Alcala is actually credited with the identification of at least 50 new reptile and amphibian species, and has two Philippine snakes named after him: Lyncodon alcalai (Alcala’s wolf snake) and Opisthotropis alcalai (mountain keelback).

In 1977, he created the first artificial coral reef in the Philippines, in Dumaguete, a technology that remains in use today in many parts of the world.

“Nothing can really take the place of real coral, however, because they produce oxygen,” he qualifies.

He also worked with another National Scientist, the late Dr. Edgardo Gomez, founder of the University of the Philippines-Marine Science Institute, on Gomez’s own passion: pulling the native Philippine giant clam, Tridacna gigas, from the brink of extinction.

In 1992, Alcala received the Ramon Magsaysay Award for Public Service, for his “experience in tropical marine resource conservation,” because he is a “world-class authority in ecology and biogeography of amphibians and reptiles, and is behind the invention of artificial coral reefs to be used for fisheries in Southeast Asia.”

In 2014, President Benigno Aquino III named Alcala a National Scientist of the Philippines; in 2017, he was declared an Asean Biodiversity Hero. He remains a trustee of Silliman University, and leads the board of advisers of the university’s Angelo King Center for Research and Environmental Management (Suakcrem).

After the snakes, a species of nudibranch, a colorful sea slug, was discovered in 2019 in the Verde Island Passage and named after him: Chromodoris alcalai.

Alcala smiles when asked how he feels about such honors. “I’m delighted to have worked in both the terrestrial and marine environments, and it’s nice to feel that I have made a contribution. But it’s most important for me to contribute to the welfare of poor fishermen in the country who live off the resources coming from the sea. I’ve had 50 years of working with the sea; these Dumaguete fishermen are my friends, and I still talk to them a lot.”

Alcala remembers how he used to scuba-dive “almost every day” when he was younger. “Even those dive tables were not yet in vogue during my time,” he says of the older, manual way of computing for dive time and depth, made obsolete today by dive computers. Still, he reads reports on MPAs around the country, keeps in touch with colleagues from the Philippines and abroad, and even cowrote a paper on plastic particles in the ocean, published just last year.

Longevity runs in the family, as Alcala’s mother lived to be 102, but he does keep healthy by exercising, eating fruit and avoiding red meat.

“My wife Naomi is also 92, and feels the same way I do. It’s a good thing our son and some grandsons are all MDs, so they prescribe medicine for me if I need it!”

Climate change may not have been a big issue in his younger days, but this National Scientist acknowledges that increasing temperatures today are proving lethal to corals, as well as to the rest of the planet.

Indeed, climate change is dangerous, Alcala concludes—“but so is reclamation. I hope they will see the light and rescind that proposal. It pains me to know that they are thinking of that. I hope our agencies of government will prohibit such reclamation along all important coastal areas.”