PH art responds to 1521: ‘History itself is a struggle’ | Inquirer Lifestyle ❮ ❯ 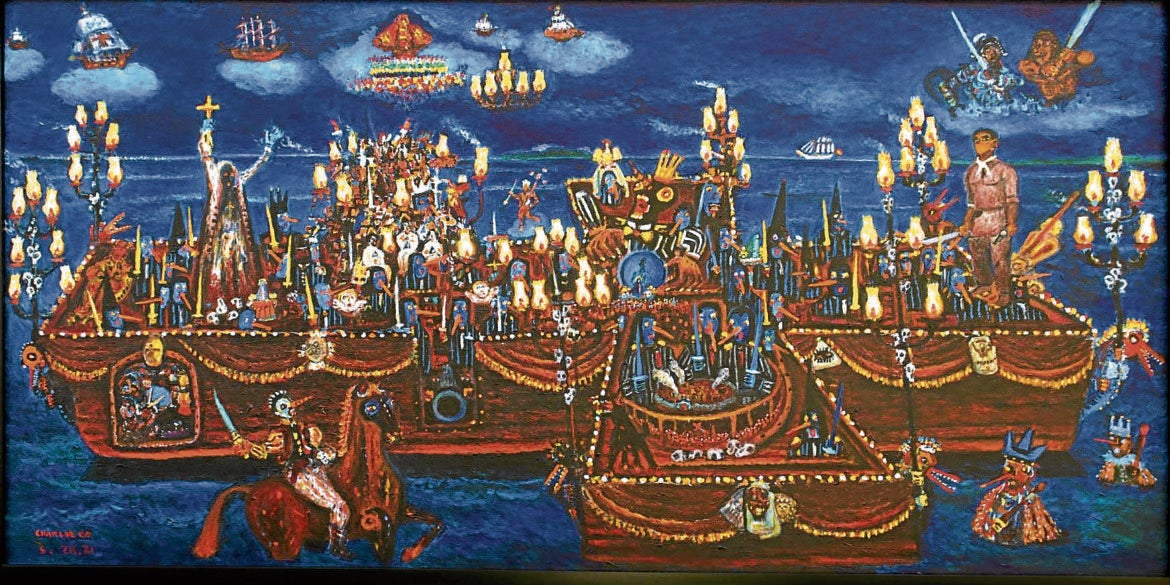 PH art responds to 1521: ‘History itself is a struggle’

What did it all mean? The build-up to the year 2021 has been massive, as the year marks 500 years since the Spanish and Christianity arrived on our shores.

But even before the year itself, debate began to emerge about the significance and the implications of this half-century—all before the pandemic struck, hampering planned celebrations in particular of three events: Ferdinand Magellan’s journey, the Battle of Mactan and the first Catholic Mass in Asia.

How did the artists respond to it? They created. In “A History of Struggle: Philippine Art Remembers 1521” at Pinto Art Museum in Antipolo, Rizal, curator Patrick D. Flores has gathered an extraordinary collection of works across genres and generations, challenging what we know about 1521.

Flores, professor of Art Studies and curator of Jorge B. Vargas Museum and Filipiniana Research Center of the University of the Philippines, understands how each piece fits: “Every piece is of interest; all the artists tried to find an entry point into the historical events, and from there risked their own iconography and discourse. The results are varied. Some hewed closely to the easel painting tradition and recognizable imagery; others explored iconoclasm, street art, allegory, feminist critique, photograph-based conceptualism, postcolonial intermedia, and so on.”

How does it connect to the present? “In light of COVID-19, the colonial context is surely salient,” Flores says. “The movement of pathogens has been part of a global history of which colonialism was a primary genetic material.”

Further, “A History of Struggle” is not an online exhibit. It is a physical exhibit to be experienced.

“A History of Struggle” is deceptive because it represents not 1521, but the time between 1521 and now—and the possibilities, the destruction, the creation in between. It is an exhibit for our times. See it for yourself.

Lifestyle discussed the exhibit with Flores. Here are excerpts:

The pieces of art seem to be unified in an effort to “remix” popular or accepted notions of those three events, the Magellan voyage, the Mactan battle and the Mass. Why do you think it is important to provide an alternate view of those events?

Common knowledge around the events of 1521 has given us the broad strokes of history, as may be seen in textbooks and popular culture. But in the face of changing attitudes and new facts yielded by research, we need to continually revisit history and closely read its fine print, and in the process put forward perspectives that complicate what has become a shorthand of the past. Ideas and methods of writing and interpreting history have been subjected to lively debates, and so should attempts to represent it in art. Art has the capacity not only to propose alternatives to familiar habits of thinking, but more fundamentally, to enhance the historical imagination, which is a twin task: to imagine historically and to render the context of this imagination creatively.

Just as the exhibit uses a variety of mediums and styles, the exhibit takes different “alternative world” approaches to the events. How effective do you think this variety of approaches and methods is in meeting its goal?

We realize that mediums and styles are not merely formal choices; they trace the ecology of options from, with and through which artists imagine their forms. The more ecologies evoked, the better placed the exhibition is to portray the complexity of history. Part of these ecologies are the biographies of the artists, their talents and persuasions as creative citizens, the perspectives they bring to the production of art. That said, the forms themselves need to be understood as language, signifying and therefore recreating.

“A History of Struggle” features over 30 artists in various stages in their careers. How do you think this figures in the overall impact of the exhibit?

I am interested in viewpoints coming from different generations for a number of reasons.

First, the public gets to see aspects of the history of art. Second, the range of this history widens as the artists index the different phases in their practice. Third, the discourse thickens through the density of experience and experiment. Fourth, the sensorium of the exhibition becomes livelier.

I also made it a point in this project to scan the rainforest of Philippine art and not to merely reproduce a predictable terrarium. And so, the tendencies are mixed; artists are not just from Manila; they are not only men; some are emerging and others are eminent; and so on.

Every exhibition is site-specific. I am aware of the program of Pinto and the taste of Dr. Joven Cuanang, the visionary of the institution. While I tried to layer new things around the core of his vision and initiated some changes in procedure, I respected the spirit of the place and its history; that is the ethical obligation of the guest.

The ethical obligation of the host is to be hospitable. Because of the public health restrictions, I was not able to do as much research as I could. Besides, even under prepandemic conditions, it is impossible to keep up with the energy of the current art ecology and its swarm of species. And so, I relied on what I knew, whom I knew, and what and whom I thought were promising and ready.

The important element of the visit to the studio or a conversation with the artist was, unfortunately, not there.

Conversely, what did you think was the best part of putting it together?

The best part, and I think the driving force, was to contribute to the discourse of the quincentennial, to not let this event pass without a remark or an inflection. Some artists took to it with excitement as a way to overcome the inertia of a lockdown.

As an art historian and curator, I was also keen to look at painting and sculpture again, specifically how these visual technologies are able to reference the figure of the “historical,” considering it was colonialism that partly shaped them as mediums of art and also of imperial conversion. In other words, I was curious about the state of image-making in relation to historical thinking.

In many ways, “A History of Struggle” can also be interpreted to mean the struggle is still going on, after 500 years, as shown by some of these works. What would you say to that?

That’s exactly the point: history itself is a struggle. It is not only to be represented as a fully formed object or event, or reduced to a theme. To think of history and historically is to be part of the struggle against how a dominant consciousness makes us think of time, place and phenomenon in a certain manner. This is one way to conceive of struggle. The other way is to think of it as continuing, ever-replenishing, in fact, always incipient because the resolve is renewed time and again, never to harden into norm or normal, or worn down by cynicism or self-righteousness.

“A History of Struggle” is not available for viewing online. What value do you think should people put in visiting museums and galleries like Pinto and viewing art in person?

The encounter with art requires attentiveness. And oftentimes, it is the museum that can provide the condition for this to happen, or even ramify. Also, art invites or attracts the senses through its material and its qualities. That might be hard to glean in a virtual tour.

Finally, the curatorial atmosphere is vital, how works interact with each other and how a member of the audience walks around with others to view the exhibition. It becomes at once an intimate and collective experience.

What is the one thing you want people to take with them after viewing “A History of Struggle?

”That Philippine art is responsive. And that Philippine art history is timely and worldly, rooted and yet migrant, offering consistent quality across tendencies, whether in realist painting or conceptualist installation, in printmaking or sculpture. Philippine art always steps up to the plate to honor and pursue its history of struggle. INQ“A History of Struggle: