WATCH: Rica Peralejo shows off jumping rope skills as she encourages 'those who think they can't' | Inquirer Lifestyle ❮ ❯ 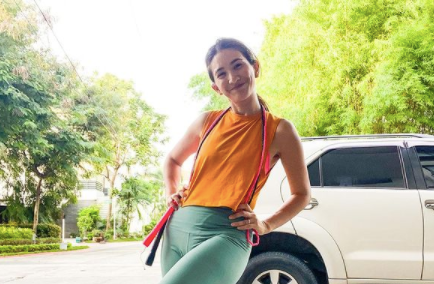 WATCH: Rica Peralejo shows off jumping rope skills as she encourages ‘those who think they can’t’

Actress and vlogger Rica Peralejo believes that anyone can go beyond his or her limit, as long as they try.

Peralejo talked about exceeding one’s limits via Instagram yesterday, Aug. 1, as she shared a short video of her doing jumping rope exercises.

“A little encouragement to those who think they can’t,” shared Peralejo, who admitted that she has “never been athletic in [her] life.”

“I was also diagnosed with scoliosis before I hit 12. When I got older I felt old, then I acquired spondylosis, gained much weight in the [United States], apart from that after giving birth to two babies I experienced incontinence,” she shared.

Due to the said challenges, Peralejo used to believe that “jumping” is not for her.

Peralejo also shared with fans one of her most favorite quotes by Francis of Assissi: “Start by doing what’s necessary; then do what’s possible; and suddenly you are doing the impossible.”

As she continued doing jumping rope workouts, Peralejo came to realize that she is getting better and better every day.

“I never thought I’d ever be able to do one-legged jumps,” she wrote in the TikTok video shared on Instagram. Likewise, she said she never thought she would be able to “squat jumps” as she shows in the clip just how she does them.

For Peralejo, jumping rope has changed her life as it has taught her “to not put limits to myself.”

“Jumping needs both humility and vulnerability to admit you don’t know for sure what you can do until you try hard enough,” she said. IB

Raymond Gutierrez comes out as part of LGBTQ community