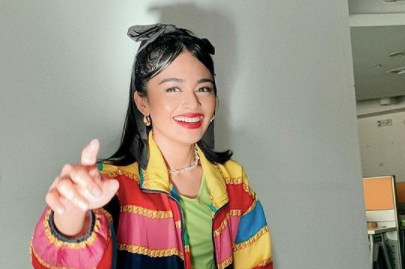 Out of all the things they shot for ABS-CBN’s “He’s Into Her”, Vivoree Esclito enjoyed the basketball scene where she plays a cheerleader the most.

(The basketball scene because many things happened. It was very exciting. I enjoyed being a cheerleader even though it was painful for my throat… I really enjoyed that scene.)

(Aside from the actual scene, like what the others said, the bonding moments off cam. That experience was very fun. We got to know one another more.)

She also admitted to having many similarities to her character in the show, Ysay Baylon, like her being “fangirl” and her love for the arts.

For his part, Joao Constancia could not forget that “prank scene” with the series’ lead star, Belle Mariano.

“There was this one scene we were doing sa school. We were creating a prank for Belle at all cast kami dun. Eh sa eksena na yun si Gello (Marquez) talaga yung nagdadala eh. Siya yung napa-plan and everything.

(There was this one scene that we did at the school. We were creating a prank for Belle and the whole cast was involved. In that scene, Gello Marquez really was the lead. He planned and did everything.)

“So I remember when we were shooting this scene I couldn’t stop laughing while we were taping it,” the actor recalled.

“Like I had to hide it because we knew the cameras were in front of us. I couldn’t hide my laughter talaga (really). It was truly genuine and it was just really funny,” he added.

“He’s Into Her” is a Kapamilya series based on the best-selling novel of the same name from Wattpad writer Maxine Lat Calibuso. IB

WATCH: Rica Peralejo shows off jumping rope skills as she encourages ‘those who think they can’t’

Arci Muñoz, as DILG ambassador, encourages Filipinos to get vaccinated