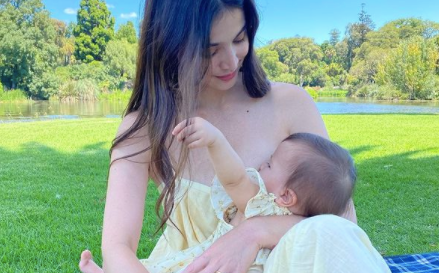 Anne Curtis looks back on breastfeeding journey: With struggles, worth cherishing

Anne Curtis has spoken about how much she treasures breastfeeding her daughter Dahlia Amelie for 17 months now, which she describes as not easy but definitely worth it.

“I had my own struggles but it’s been an unforgettable first time journey so far. One I will always cherish and the little moments shared between her (hair pulling and biting involved),” she said in her Instagram post today, Aug. 8.

But the young mom discovered something in her body the moment she started lessening the breastfeeding.

“When I started dropping feeds (when food became her main source of nutrients) my hormones started changing and I was just very quiet and felt somewhat melancholic,” she said. She didn’t know anything about it until her husband, chef and entrepreneur Erwan Heussaff, called her attention.

“Did myself some reading and learned that it’s because of a drop of prolactin and oxytocin levels when you start to lessen feeds. But since I am weaning slowly, and breastfeeding only [two to three] times a day na lang, it’s become somewhat a gentle wean that’s helped me not have such an abrupt shift in hormones,” she explained.

Curtis hopes that by sharing her experience, fellow moms would be aware of changes in them too, which may be brought about by similar shifts in hormones.

“You and your doctors will know what works for your little one and will keep them happy, busog and content,” the TV host-actress added. JB