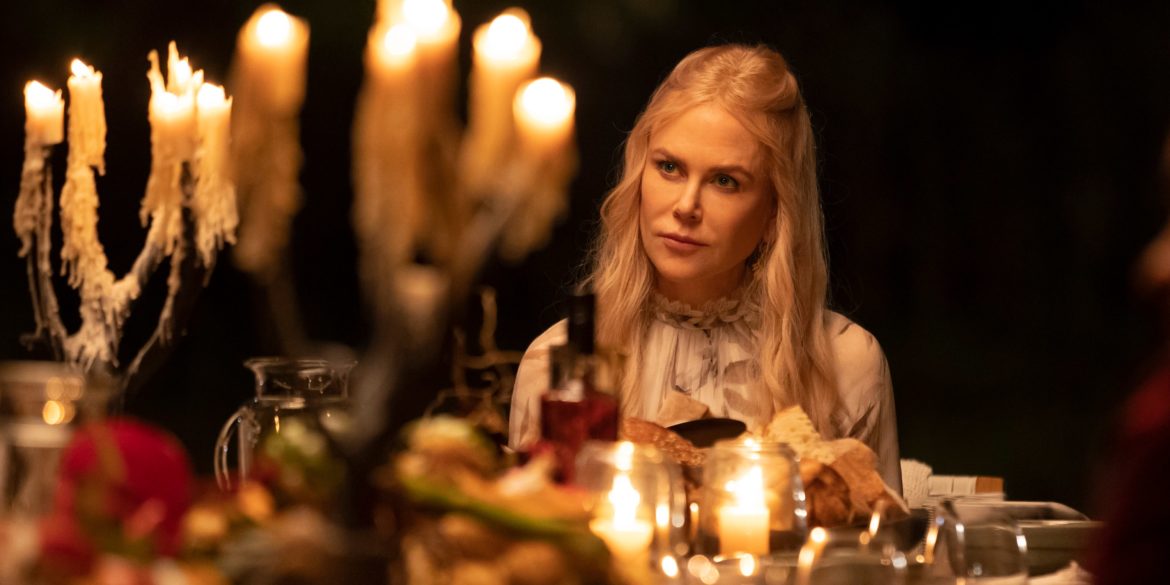 LOS ANGELES (Variety.com) – Nicole Kidman’s recent outings in scripted series TV — “Big Little Lies” and “The Undoing,” both on HBO — made similar propositions to the viewer: Explore an exclusive world through the eyes of a woman who cannot see it fully. Both featured Kidman as a privileged woman hiding from an obvious truth about her life. It’s a satisfying formula.

“Nine Perfect Strangers,” Hulu’s soapy limited series about an upscale health retreat, has a surface likeness to both of those shows. But it pushes and strains against expectations. Though based on a Liane Moriarty novel and created by David E. Kelley, as “Big Little Lies” was, “Nine Perfect Strangers” is rougher and odder, and it puts Kidman to more complicated narrative use.

This star has always had a taste for extremity, and on “Strangers,” she indulges, putting on a Russian accent and a new severity. As Masha, a mysterious guru, she floats through the lives of those in her care, with the understanding that her strangers are not perfect at all, but desire to be bad enough to give her everything in exchange.

Masha’s retreat has rules against contacting the outside, and against substance use — at least, the use of substances not administered by Masha or her deputies (played by Tiffany Boone and Manny Jacinto). There’s a fire in Kidman’s eyes when she explains to her charges the revolutionary possibilities of her treatment. Those in her care don’t deeply mind that this extends well beyond what they initially agreed to. The need to be well outweighs the fear of harm.

The show seems at first like a fight, and not a fair one: The patients, whom we see in spiky, startlingly direct conversation with one another as hallucinations and mistrust take hold, are all broken. Meanwhile, Masha appears spookily assured. She cedes much of the running time to them, to allow us to see why they’re begging for help.

Melissa McCarthy plays a famous author who hates herself and her work; Bobby Cannavale is in physical pain, which he battles into submission, and then some, with the opioids to which he’s addicted; Regina Hall plays a woman who’s outwardly conciliatory but snaps when she feels attacked.

These visitors’ struggles are effectively drawn. McCarthy, who’s lately been working in feature-film comedy with diminishing returns, is doing work that’s worthy of her gifts, spinning out threads of paranoia and self-regard.

This makes for a cheering return, although the guest-starring presence of Ben Falcone, her husband and the director of her less effective recent films, gives rise to more broadly drawn scenes, and suggests she isn’t inclined to stray too far from what’s safest. Hall, on a roll lately, is excellent. And Cannavale finds poignancy and sorrow in his character’s need.

Not all the performances get there: Though Samara Weaving tries valiantly, her character — a social-media influencer with body dysmorphia — plays like an attempt to comment on current issues, not a rounded personality.

And a grieving family played by Michael Shannon, Asher Keddie and Grace Van Patten are plainly suffering, but perhaps because their time together is dominated by avoiding the unspeakable rather than spilling their guts, their struggle lacks grain and specificity that other guests generate.

In group conversations, spirited engagement can sometimes be cut short by a scene coming to an end, as if a show characterized by bluntness has gotten what it needed and is ready to move on.

That points to an unexpected strength though: The ensemble is large enough that if one isn’t particularly engaged by the character on-screen, one simply has to wait five minutes for the weather to change.

Gliding over all is Masha, remote and serene on the surface. We learn, eventually, that she is struggling with her own internal chaos — not merely a need for control, which is part of the deal she makes with clients, but traumas and losses in her past that may account for her lack of a sense of proportion.

One wishes for more Kidman: Not a bigger performance, which seems impossible, but one that more firmly holds the show’s center.

The risk “Nine Perfect Strangers” has taken, in its first six episodes, is keeping her relatively unknowable. Enigma is one thing, but Masha, the cryptic element in a story that otherwise establishes character frankly and economically, can feel as if she’s being withheld from us. It’s a surprising underuse of a performer who might show us all the things we imagine roiling behind Masha’s self-belief.

What we’re able to piece together is the reversal at the center of “Nine Perfect Strangers”: The woman in charge of healing cannot fix herself. And while we may crave more Masha, there’s interest, still, in watching characters place themselves in her thrall.

“Nine Perfect Strangers” is straightforward in setting forth its story and its stakes, and its best moments probe the lengths people go to become well. Its lack of subtlety seems, in these scenes, to be an asset: Like Masha herself, the show wants to find its way out of pain by pushing through it.