A Portrait of the Soldier as Filipino | Inquirer Lifestyle ❮ ❯ 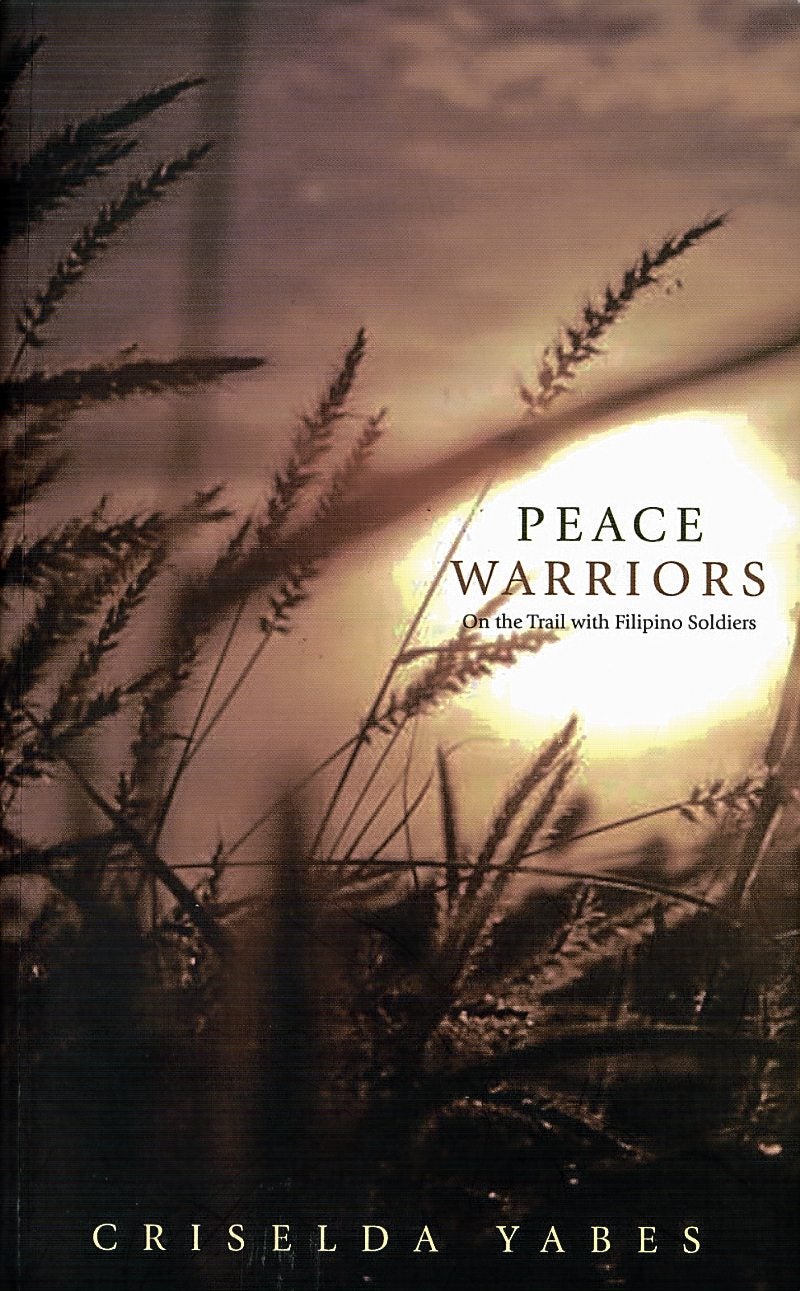 Meet the modern military man in this book

A Portrait of the Soldier as Filipino

IN 2007, Criselda Yabes found herself visiting a workshop for high school teachers in Sulu at the southern tip of the country. Yabes looked into the eyes of the participants and was startled by what she saw. “That’s where I learned that for them, the sight of a man in military uniform always reminds them of their fate,” she said. “A soldier provokes apprehension, doubt, weariness, distrust. The memory has been passed down from their parents’ generation.”

That got Yabes into asking manifold questions about Mindanao. Yet this is but a portion of the complex subject matter that she tackles in her new book, “Peace Warriors: On the Trail with Filipino Soldiers,” released by Anvil Publishing.

This is Yabes’ seventh book. A journalism graduate from the University of the Philippines, Yabes is a veteran correspondent here and abroad. Having spent a great period of time growing up in Mindanao, the subject is near and dear to her heart, as demonstrated by how she weaves the Muslim promised land into her books. Her novella “Sarena’s Story: The Loss of a Kingdom” won the UP Centennial Literary Prize for Creative Non-fiction, while her 2010 novel “Below the Crying Mountain” was long-listed for the 2010 Man Asian Literary Prize.

But the book Yabes is best known for is the 1991 release “The Boys from the Barracks: The Philippine Military after EDSA,” in which she paints a vivid picture of the soldiers who took part in the military uprisings after the ouster of former President (Ferdinand) Marcos. The shivers of military dissension defined a generation of Filipinos as well as military men, and this is something Yabes pushed to the front in “The Boys from the Barracks.”

Yabes now combines soldiers and the Mindanao question in “Peace Warriors,” her nuanced, heavily detailed survey of soldiers she encountered during sojourns in Mindanao. This is truly a sequel to “The Boys from the Barracks.” Here, the author takes pains to paint a picture of each soldier, airman, Marine and sailor she meets as an individual with a story all his or hers, instead of just a name plate and a uniform.

What lies at the heart of “Peace Warriors” is how much the Philippine military man has changed since those tense post-EDSA decades. She observes how military leaders have changed to deal with new and untold challenges. She frames this by an ongoing reflection on what it really means to be a Filipino warrior: “A warrior’s path is his own reckoning; he should be able to judge for himself the spirit of a fight, the purpose of being a soldier, the meaning of his quest. He must be able to understand the language of his heart, even when he has to break it down to pieces, to reconcile with the reality, the unachievable, and the depth of a conscience.”

The gift that Yabes provides here is context, and context is particularly important when you discuss the enigma that is the Mindanao problem: “Mindanao is complex. Every village, every town, every province has a story of its own. Like a play, you must acquaint yourself with the characters; and to simplify the staging, the audience will have to know how to identify the good guys from the bad. It takes the gift of leadership to be the good guy.”

Not only is Yabes discussing the current state of the Filipino fighting man, but she does so in the shadow of the most active theater of war still existing in the country. Yabes takes the time to pare the various aspects of the Mindanao conflict, such as the different regional leaders (among them Nur Misuari and Ali Dimaporo, for example) and the nature of the rido, the unending vicious cycle of clannish violence that has long gripped the local population. It is a heady stew of religion, blood and broken promises as well as questions of identity wherever she turned.

“Where is the voice of our Muslim people? Has it also been silenced by the guns of rebels who also want the past broken, the sultanate forgotten, since the issue is now a question of ancestral land and social and economic accommodation to the errors of history? Or is it a question of the fundamentalist faith that sets aside the culture of homegrown Muslim tribes? How complicated can that be when all you see is the blueness of a sea?”

At the end, Yabes also includes an epilogue that tells the tale of the powerful Ampatuan clan, the alleged leaders of what is now known as the Maguindanao Massacre. An unflinching account, it is as engaging as it is frightening.

Meanwhile, Yabes familiarizes readers with the new leaders of the Philippine military, the men who have essentially inherited the issue of dealing with the insurgency down south. These are incisive, lovely portraits of the men in charge as well as the ones who just carry out the orders. She talks about how much they are trying to get away from the stereotype of the Filipino soldier as utak pulbura (gunpowder-brained, literally men who only think of war): “Or maybe, a true warrior is one who is mindful of his duty, who undergoes discernment and introspection to know his duty, and realizes that it is a duty to be performed in this life. Something deep inside him might say, this is the right thing to do.”

“Peace Warriors” carries within its pages Yabes’ poetic and poignant prose, using elegant language to tell the convoluted tale of why Mindanao has become the unsolved puzzle that it is: “There’s a long way to go. And there is a major problem with the strategy: When we are close to putting the missing note on the musical sheet, so close that we can hear the faint hymn of love of country, the equation changes, often dictated by the tone of politics. We are then caught off-balance, we tilt, trying to figure out if there is a much bigger, albeit hidden picture – conflict of interests, national policies, regional issues, world affairs – other than what we are trying to hold in our hands.” Evidently and despite all that has happened in the last few decades, Mindanao remains as compelling a question as ever.

It is telling that in “Peace Warriors,” a dramatic, exhaustive and gripping chronicle of the boys from the barracks as they fanned out in the field under fire in Mindanao, Criselda Yabes leaves Mindanao the same way she came to it: on a Huey helicopter, the topography moving fast below her, the land staying the same no matter where you go. •

“Peace Warriors: On the Trail with Filipino Soldiers” is available from leading bookstores.