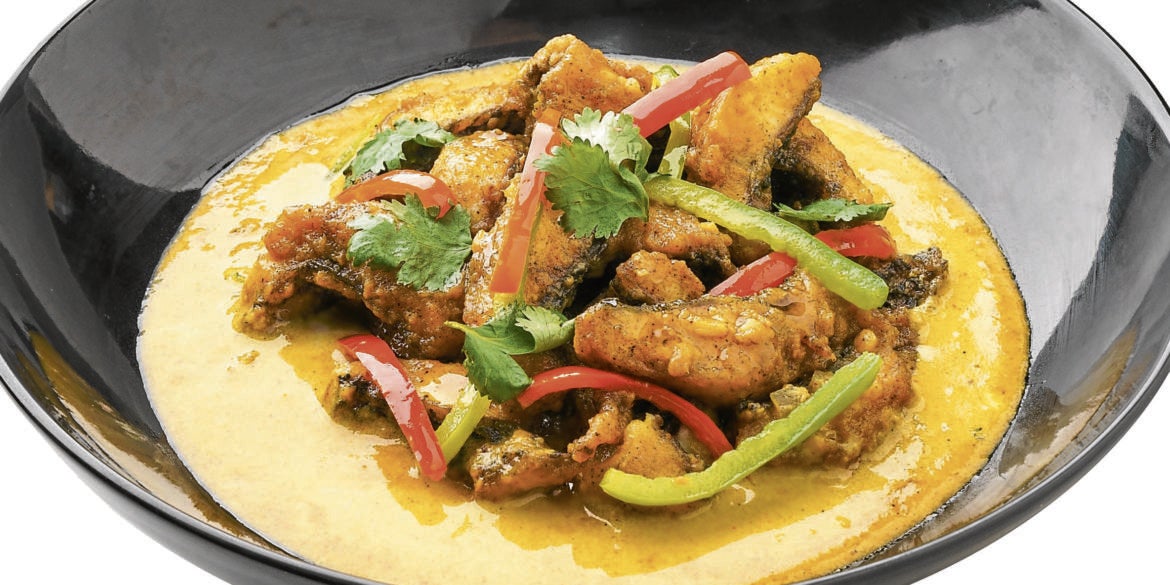 A recipe with complex flavors, fish curry involves making an aromatic base from scratch.

During his student days at the University of San Carlos, Cebu, Michael “Myke” Giovan Sarthou was a campus newspaper editor and speechwriter for the mayor of Lapu-Lapu City. He envisioned a career in writing and film production.

By a twist of fate, he ventured into the culinary field and became a TV personality, Chef Tatung, a childhood nickname given by his mother after a popular electric fan in the 1970s. As pandemic restrictions continue to batter the restaurant industry, Chef Tatung has pivoted to multimedia communications, fulfilling the dream of his youth.

Vertikal Kreatives, of which he is president and cofounder, is a content and video production company based in Quezon City. “This venture gives us complete financial and creative control,” says Chef Tatung. “Since the pandemic, we have been working on paperback releases, among them a book, complemented by a docu series on Philippine cuisine. It will be released internationally next year.”

Although the family-owned Filipino restaurant, Talisay, and Pandan Asian Café, a partnership with restaurateur Yong Nieva, have been surviving, the chef notes that the takeout and delivery business is competing with many home-based food sellers. While Chef Tatung is still a part-owner of these restaurants, he has shifted his focus to producing content.

“As everything keeps changing in the world, that’s the way to stay in the game,” he says.

Recipe within a recipe

“Simpol: The Cookbook” was his first foray into self-publishing. He describes the project as “Anak ng Pandemic” since the manuscript and videos were produced last year. It won in two categories in the prestigious 2021 World Gourmand Awards—Easy Recipes at Home and Celebrity Chefs-The World (outside of France). The book is distributed by ABS-CBN Publishing, which submitted the entry. Since its launch last November, “Simpol” has undergone six reprintings.

Later this year, Chef Tatung will launch more self-published books—“Simpol: Kitchen Secrets” in September and “Baking Simpol” in November. His company will sell them via virtual marketplaces. He adds that the company has likewise made a cookbook for UFC’s 50th anniversary, which features 50 recipes from the global followers of his Simpol channel.

“Simpol” is the country’s first cookbook that comes with a YouTube tutorial for each recipe. Scan the QR code on the recipe page, and it will link to the video. “If you don’t get the recipe by reading it, just click and watch. We produced over 100 videos in our studio,” says Chef Tatung.

Aside from being the top-selling cookbook in Lazada and Shopee, “Simpol” is doing brisk sales on Amazon. It came in handy during the lockdowns when people spent more time in the kitchens, he says.

Aside from the video how-tos, the book’s winning formula is the “recipe within a recipe” format. Standard recipes merely enumerate the ingredients and the procedure. Chef Tatung, on the other hand, divides each recipe into sets such as Set A for the meat to be marinated, Set B for the food to be sauteed and the meat to be slow-cooked, and Set C for adding the other ingredients such as the vegetables.

“If you don’t know how to cook, you wouldn’t know the right time to put onions, tomato sauce and potatoes in the pot. The recipes show how to marinate the meat, then saute the aromatics, tenderize the meat, cook potatoes and make the sauce,” he explains.

“It presents Western concepts in the context of Filipino cooking. When you say gisa (saute), it could mean stir-fry,” he says. In Chinese cuisine, this quick cooking evaporates the moisture from the food, leaving them crisp enough to be picked up by the chopsticks.

Chef Tatung points out that gisa could also refer to the Spanish sofrito, in which the ingredients are softened to make a flavor base for the meat and vegetables.

Cooks will likewise learn par cooking or how to cook food that take a long time to become tender so that they are finished simultaneously with the other ingredients.

“You learn the fundamentals and cooking methods—the different kinds of boiling—steaming, poaching, blanching; cooking with oil—deep fry, panfry, sear and saute. There are steps to make sauces and a guide to ingredients for thickeners—mashed vegetables, cheese, mashed liver, cornstarch, eggs and butter. There’s a lot of kitchen wisdom, which includes proper storage and defrosting. Once you read it, you can function and, hopefully, avoid expensive mistakes,” he says. Even kids can understand

“Baking Simpol” is an array of easy desserts and bread. “What can you make from eggs, flour and sugar? What’s the two-step method? One is to cream the butter and sugar, then add other ingredients. With that, you can make butter cake, carrot cake and muffins. What can you make by kneading water, yeast and flour? Even kids can understand the concepts,” he says.

Chef Tatung derived his know-how from hard knocks. He learned to cook from his family. Eventually, word about his talent got around. He operated small canteens, provided catering and private dining that eventually introduced him to prominent clients.

Cooking for ABS-CBN Foundation’s honcho, Gina Lopez, and her brother, Eugenio Lopez III, then CEO of ABS-CBN network, opened the doors to a media career. He has since appeared in food-oriented TV shows and was a regular in the morning shows of ABS-CBN, then to GMA 7 and back to ABS-CBN.

The 45-year-old chef attributes his culinary savvy to his journalistic abilities. “As a writer, you investigate, study and research. Those skills helped me to be on par with my peers despite my lack of formal culinary education,” he says.—CONTRIBUTED INQ