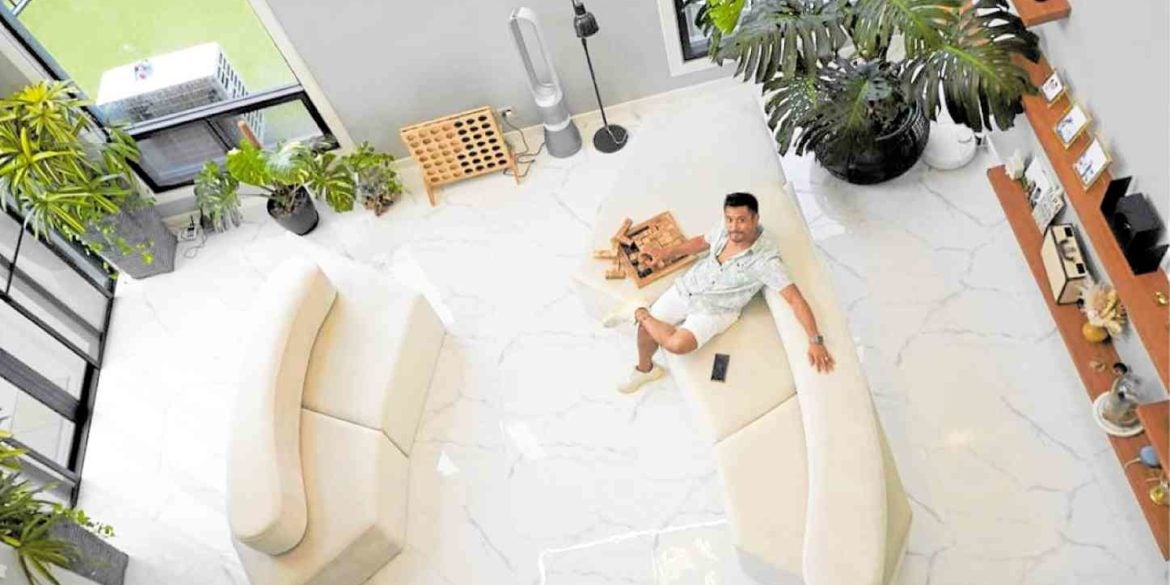 Rocco Nacino in the living room of his house in Antipolo

How Rocco Nacino is building a home—his way

Despite the challenges posed by the pandemic, actor Rocco Nacino has been having a pretty productive 2021.

In January, he married his longtime girlfriend, volleyball player Melissa Gohing, in a military wedding onboard a naval ship. And a few months ago, they moved into their new home in Antipolo whose construction and landscaping Nacino personally oversaw.

The GMA talent who starred in the station’s local adaptation of the South Korean hit series “Descendants of the Sun” is developing an eye for details. He credits this to his wife who showed him how plants can be used to spectacular effect.

“It has always been Melissa,” Nacino said in an email interview with Lifestyle. “I used to just drive her around and carry the plants she bought but then as we talked more about why each was unique, I grew to love them as well.”

He said planning took the longest time because the couple wanted to combine their ideas.

“But mostly it was her ideas that really stood out and were very impressive. I told her she could actually be a landscaping designer in the future.”

On his vlog on YouTube posted last April, he gave a tour of the ongoing landscaping project in front of their house where he named the dozens of shrubs and ornamental trees that had been freshly planted.

“There are too many to mention but the highlights are definitely the two African talisay trees and the elephant ears plants we thought would not survive the Antipolo heat but are now blooming. The variegated African talisay that we’re taking care of now is a small tree since a big one is too expensive—P24,000 for a grown one.”

A palm tree was installed to serve as an accent near the guest walkway leading to the entrance. There is also a yucca plant he said they might later replace with a phoenix palm.

Nacino and his wife purposely saved up for the landscaping project, describing it as an investment because it would serve as a first impression to visitors.

“We did have to get a landscape designer to guide us for the set-up. Most of them gave us mind-blowing costs as having a plant box made was actually super expensive. It’s good Mel and I knew how much landscaping plants actually cost so we could bargain. Plus, it was a huge advantage that we had our own plants so we could lessen our costs. It was very messy at first storing our plants at the side of the house but it was worth it.”

That “eye for details?” Nacino put it to good use when he happened to come across several maintenance men in their village breaking down boulders that had been dislodged years ago and were blocking the road. The boulders were around sixfeet tall and took the staff weeks to break them down.

“That was actually an accident! They had inserted dry wood and let it burn until the boulders cracked into smaller pieces. When I saw the color of the rocks, I said, ‘Pwede ’to pang-landscaping ah.’”

He approached the village president, made his request and was given the go signal to get as much as he wanted since they were really going to just dispose of them.

“I brought some guys and a truck to help carry them to my house which was a block away. But I had to be there to point out which ones would be good for the front of the house. Free plant boxes! I saved myself P100,000 with those adobe rocks,” he said.

Months after the couple moved into their new house, the plants have adjusted to the Antipolo atmosphere and have fully taken root.

“They’re blooming really well,” he said. In between tapings, Nacino has been keeping himself busy on the homefront. His newest project involves having his helper pull up the weeds in the unused lots across from and beside their house.

“I bought new soil and we extended our vegetable garden there. There’s sitaw, tomatoes, chili, okra, eggplant, corn and squash. I had the same thing done for the lot in front and put fruit-bearing dwarf trees: dragon fruit, ponkan, mandarin orange, kiatkiat and atis.” INQ