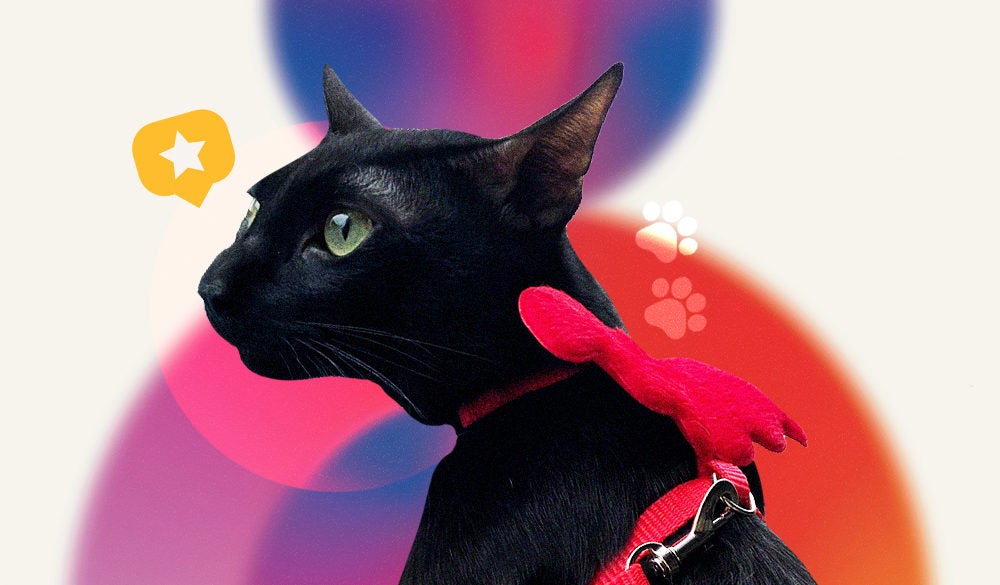 My kitty is now an alt TikTok baddie

This story is part of “Please Make My Cats Famous,” a video series where editor Zofiya Acosta attempts to make their two cats famous via a series of challenges.

Last week, I dressed up my cat Astrophe and turned him into a fashion content creator like Mikyle Quizon.

This time around, my spicy and handsome devil, Onion, is taking over.

Before we go on, here are some true facts about Onion:

Since Onion is something of a diva, I tried to dress him up in a way that would channel his inner icon energy. I also decided that my second son should get on TikTok—and I got alt TikTok overlord @princess.rih to help me.

I found Rih’s account a few months ago, when they made TikToks that warmed my very sapphic heart. For some reason, I just had a feeling that they matched my cat’s demon god energy. I think I was right, and when we hopped onto the call, Onion started meowing his heart out, demanding to be heard by his aura twin.

One thing I was really nervous about during this challenge was recreating the look and feel of Rih’s TikToks. I wanted to get that cool lighting down—but I had no idea how.

At the last minute, I dug up this old transparent fanny pack—remember when see-through bags were a thing?—in the hopes that if I shone a light through it, it would have some kind of effect.

Thankfully, it did! Depending on where my phone was positioned, the light was giving off different effects: it gave me bi lighting and aurora borealis lighting. With my lights off and my windows closed, it kind of felt like I was back in a club. NGL, I was probably way too proud of what I did: I was declaring to everybody that I could replace 5-Minute Crafts as a life-hack creator.

I put on a red harness on Onion that had little demon wings on it. On its own, it looked cute. Kind of sweetheart-ish, even. But with the lighting, he somewhat resembled a leather daddy bouncer of a cat-only club. It wasn’t exactly the vibe I was going for, but it was a vibe™️.

I’ve always held the idea that my little void boy could slay millions with his looks, and I think this solidified it.