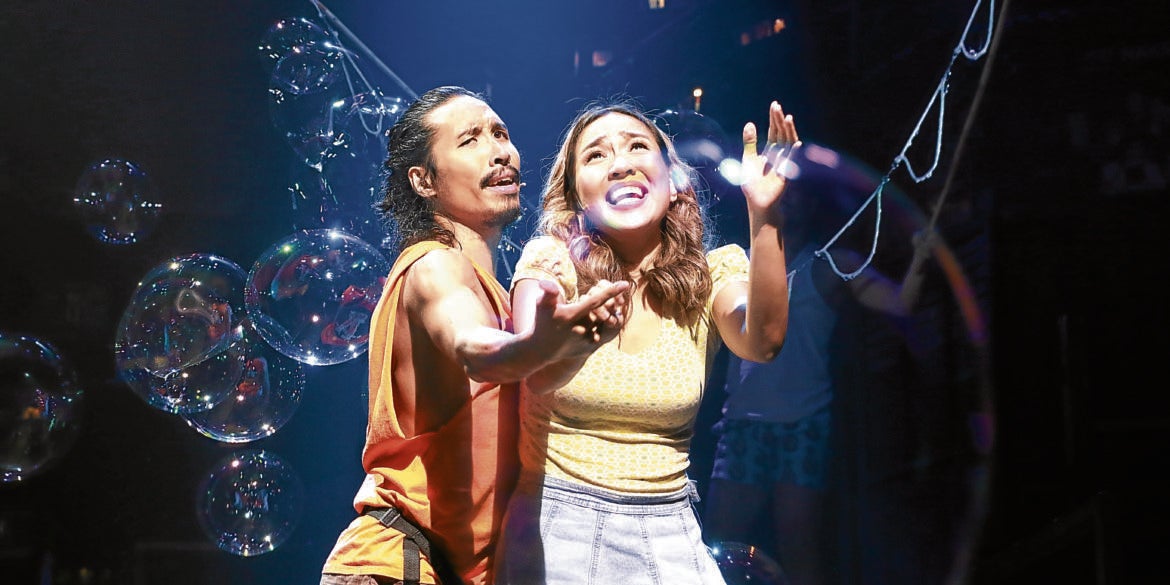 Pepe Herrera as Tolits and Aicelle Santos as Aileen

Why ‘Rak of Aegis’ still rocks

The country’s longest-running musical makes streaming debut, allowing viewers to sing along at home—and for it to evolve and survive

Stileptos” is the antileptospirosis fashion shoe invented in Barangay Venezia, the fictional flood-prone village in “Rak of Aegis.” It’s very Pinoy, and one of the funny bits in the jukebox musical that never gets old even after several viewings, live and online.

Philippine Educational Theater Association (Peta) was quick to launch digital programs at the start of the pandemic, but it took a year before the well-loved musical was shown on a paid streaming platform. For one, the already struggling company had to make sure tickets would sell, plus there’s the competition and the risk of piracy. But in July, “Rak” had a successful virtual run, and even added two encore shows recently.

“There were so many unknown factors when we decided to stream ‘Rak,’” Peta executive director Beng Cabangon said via email. “We really didn’t know what to expect, but it was clear to us that ‘Rak’ had a huge audience base, having run for seven seasons prior.”

The Peta team got confident after the streaming announcement in May went viral. “That’s when we knew that we might stand a chance. We felt that there was a lot of excitement over the streaming from people who saw ‘Rak’ before, to new audiences who never got to see it live,” Cabangon said.

Over 23,000 tickets were sold, according to sales head Mitch Go, and among the three ticket tiers (one-time viewing, 24-hour streaming, 24-hour premium with Aegis concert), the P500 24-hour access sold the most.

“I think ‘Rak’s’ enduring success is based on the mix of popular music, comedy carefully mixed with social issues, strong performances and tapping into the ‘Pinoy sensibility,’” director Maribel Legarda said. “The play speaks to us about survival, and Filipinos know this narrative so well.”

“Rak” was inspired by stories of hope after the Philippines was hit by two big calamities, Typhoon “Ondoy” (international name: Ketsana) and Supertyphoon “Yolanda” (international name: Haiyan). It’s centered on the impoverished but festive community of Barangay Venezia that got stuck in floodwaters for months, and how the villagers managed to survive through smiles and songs.

The wholesome storytelling of writer Lisa Magtoto made the show fun and relatable, and, of course, there were the hit songs of the Aegis band, beautifully arranged by Myke Salomon, and highlighted by the choreography of Gio Gahol.

I’ve watched “Rak” live twice, in the first and the last (hopefully not the final) runs. Over the years, new songs were added, the cast changed and the narrative was tightened, although there were still dragging parts in the second act. Looking at old pics, the upgrades were most significant in the colorful shoes by Maco Custodio and vibrant costumes by Carlo Pagunaling. “Rak” was Peta’s workhorse and it deserved to be fancier, but “Rak’s” evolution culminated in its virtual incarnation.

I’ve also seen “Rak” online twice, which made me miss live theater even more; it’s like a Coke and a Coke Zero—same stuff but different experience. There’s a spirit missing and it’s never going to be as satisfying, but pwede na.

The “essentials” of “Rak” don’t translate on screen like the impressive stage with a real boat and “baha” by Mio Infante, or the flashy lighting by ​Jonjon Villareal. The energy of the performers bouncing off the audience may be felt if one watched the show online with a group, but that’s about it.

The good thing about watching “Rak” at home, though, is that one can sing along, which is obviously forbidden in the theater. At Peta, the fun in “Rak” actually starts before the show, with a booming announcement asking the audience to stop themselves from singing, no matter what, unless they can belt it out higher than the pros, in which case they should have auditioned for the roles. Again, very Pinoy.

Virtual “Rak” has also allowed Filipinos living outside Metro Manila and overseas to catch the show—and with snacks.

A real-time concert with the Aegis band was initially planned on Aug. 8, but due to quarantine restrictions, Peta instead streamed a taped show with performances by cast members Kim Molina, Jerald Napoles and Kakai Bautista.

The “Rak with Aegis” concert was “a feat on its own,” Legarda admitted. “It was a relief to record it because of all the technical and protocol considerations, but what a joy it was to meet with the Aegis band and hear them sing live … We just all missed doing theater and performing for a live audience.”

Broadway and West End shows will reopen in September, and I don’t know when I’ll ever see a play in the Philippines again. Virtual theater is frustrating, but it helps companies like Peta go on, and Legarda thanked the longing audience: “I was really so overwhelmed with the support and love for ‘Rak.’ Honestly, every time we have a run, I am always so worried that it may not resonate with the audiences anymore, but thankfully, so far, we have always gotten such good feedback.”

Soon, Peta will offer “Rak of Aegis Exclusive Shows” to companies and groups. The Rak the Vote education campaign is also ongoing until October, with a screening of the vaudeville musical “Si Juan Tamad, ang Diyablo at ang Limang Milyong Boto” in partner schools.

Last year, Peta had to abruptly close “Under My Skin,” the anthology drama on Filipinos living with HIV, but it was thankfully shot for film by director Melvin Lee before the pandemic started, and will be streamed in November.

Peta has been around since the 1960s, and has gone through challenges from martial law to COVID-19. “Rak of Aegis,” the longest-running musical in the Philippines, is campy and cheerful, with tricks such as the stileptos, “sapatsinelas” and Baha Jos, and hopefully, it will go on stage again, and end with a rambunctious meet-and-greet at the Peta lobby. I promise not to sing along.