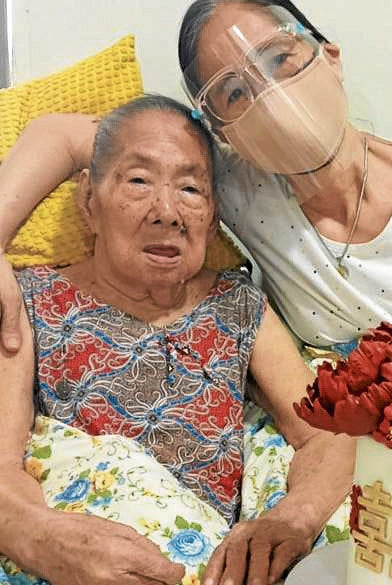 A 95-year-old COVID survivor and other stories of recovery

What we offer is a guidance, not a prescription. It has to be given under a doctor’s supervision

It’s par for the course when you write commentaries that you get both positive and negative comments.

A certain Gochong Go writes that our ivermectin-plus-melatonin-based recommendation for COVID-19 prevention and treatment should be printed in the animal section, insinuating that it’s not fit for humans.

But with every negative comment like this, we get at least five positive comments, which reassure us that the isolated negative comments are not a metric of the usefulness of the information we try to convey to our readers.

Dr. Carmen Mayugba-Sugai, who has now retired from a successful practice in the United States, shares: “Thanks for the [treatment] protocol. I was able to use it for the husband of my niece who lives in Baton Rouge, Louisiana. He was positive for COVID—possibly Delta variant—was unvaccinated and not observing safety precautions like [wearing] masks and social distancing. He responded favorably within three days of the regimen and continues to improve. My niece was at first [a] skeptic, but I insisted, citing examples of recovery from this regimen. Thank God she listened.”

She adds: “This example demonstrates the effectiveness of targeting the virus in the earliest stage of infection—getting rid of the virus from the body and preventing replication of the virus while at the same time working on improving the patient’s immune system.”

Bill Cowper of Pasig City shares: “The entire family of my friend got COVID. Everyone took IVM (ivermectin), melatonin and the entire vitamin regimen of Dr. Raffy Castillo, except the dad. He doesn’t believe in IVM. He was the only one hospitalized and he died 18 days later. The entire family including the house help got well within days, staying all at home. The treatment regimen really works.”

Lorna Adlawan-Fernandez of Kawit, Cavite, shares her double close encounter with COVID-19. First, her mother-in-law succumbed to the infection in the hospital during the last surge in April, then her husband Chin, who took care of his mother, also got infected with severe COVID.

There were no more available hospital rooms in Metro Manila when Chin fell ill. They had no choice but to treat him at home, despite the findings of bilateral COVID pneumonia and dipping oxygen blood levels. Since he’s middle-aged with several comorbidities, he was considered a high-risk patient.

Lorna writes: “With our second bout of battling this disease, we chose the unorthodox method [and used] your treatment … my husband’s cocktail of drugs was a mix of known supplements, traditional scientifically based medicines, megadoses of melatonin, and that controversial drug ivermectin (human dose). And of course truckloads of prayer.”

By the grace of God, Chin recovered.

Fe Sedilla of Manila, whose 95-year-old mother, Nanay Purificacion, also got afflicted with COVID-19 during the last surge, shares with us her mother’s miraculous recovery.

Fe adds: “Nanay Purificacion had fever and cough … the swab test result was positive. At the start of the second week, her oxygen level started to drop. My niece had sent us two tanks of oxygen before Nanay’s oxygen dropped. The following days were very stressful for the whole family. At 8 p.m. every day, all the children of Nanay prayed together via Zoom.

“Until today, my siblings and I never stopped praying at 8 p.m. via Zoom because we believe that with the right medication and lots of prayers, COVID can be defeated. Thank God for extending the life of my Nanay. Thank you, Doc, for your treatment guidance.”

These are just samples of the feedback we’ve been getting on the treatment guidance we offer to COVID patients free of charge. Many offer to pay but we politely tell them to pay it forward to others who may need their help. Some of them give generous donations to the foundation we support, which also helps COVID-19 patients.

We emphasize, though, that what we offer is a guidance, not a prescription. We recommend it has to be given under a doctor’s supervision, and if symptoms are severe, particularly in the elderly and high-risk cases, they have to be hospitalized. During surges, many resort to the treatment guidance while looking for a hospital.

We get calls asking us what to do for a relative who’s feeling ill with COVID symptoms. We advise them to start the treatment regimen and urge them to continue looking for a hospital the following day. Some of them report that the patient feels much better the next day, their oxygen levels are improving, and they decide to just continue treatment at home. This approach is quite risky, but at least it’s giving many a fighting chance rather than resign in their fate with a sense of hopelessness.

Last week, we received more than a dozen feedback from readers, patients and even colleagues about the recent salvo of negative comments from our Department of Health (DOH), warning everyone about the use of ivermectin for the prevention and treatment of COVID-19.

As usual, the DOH is again mimicking the announcements of authorities in the United States such as its Food and Drug Administration (FDA), which misinforms the public by saying ivermectin is mainly a livestock medicine. They’re again badmouthing ivermectin because they likely noted that the prescriptions for the drug have increased elevenfold since July in the United States.

A similar trend is happening here. Many doctors are already silently prescribing ivermectin, melatonin and other treatments off-label for COVID-19.

We’re just relaying the feedback of the majority who come to us for advice—that our DOH is fast losing its credibility, not only because of its questionable budgetary transactions, but because of its inexplicable insistence to deny the public of a cheap and effective regimen.

It’s unthinkable why, in the absence of anything better to offer COVID-19 patients, the DOH should discourage the public and rebuke physicians who offer them an ivermectin-based treatment.

The DOH’s old refrain that there remains no evidence that ivermectin would work to help COVID patients, and could instead pose harmful effects, is already taxing the incredulous minds of many. We discourage those who put one and one together, by associating this aversion for ivermectin and other cheap medicines, and the seeming propensity, based on the Commission on Audit reports, for expensive or overpriced medicines and supplies. But if you come to think of it, with a modicum of governance paranoia, that seems to be a possible reason.

We have been challenging the local experts who still oppose the use of ivermectin and the rest of the regimen we propose to just try it on 10 patients. If they do it with an open mind, we’re confident that many will change their minds, and perhaps do penance for the countless lives that may have been saved if they were just given the fighting chance.

In our group, we have treated thousands of COVID-19 patients and, by God’s grace, as far as I know and can remember, everyone who took the regimen within three days of symptoms all recovered with no need for hospitalization. If they start late within six days, some of them may require confinement, but they still eventually recover.

It’s an ivermectin-based regimen but it’s actually a multipronged, multidrug strategy to hit the virus hard as early as possible so as not give it any chance to replicate itself into a billion viral invader in the body. Aside from ivermectin, we recommend pure melatonin, vitamins C and D, zinc and virgin coconut oil. We also use antiandrogen drugs, antihistamines and steroids in some cases.

With this regimen, God has allowed us to heal all patients so far, a 100-percent recovery rate. We don’t think it was us who healed them, and we were just privileged to be used by God as His channel.

If the government does not support the regimen we propose, we can take our health matters into our own hands, and decide for ourselves what we feel is best for us and our loved ones. Let’s also try to help our indigent Filipino brethren with this self-help prevention and early treatment regimen. Truly, we can heal as one nation, in the palm of God’s loving and healing hands.