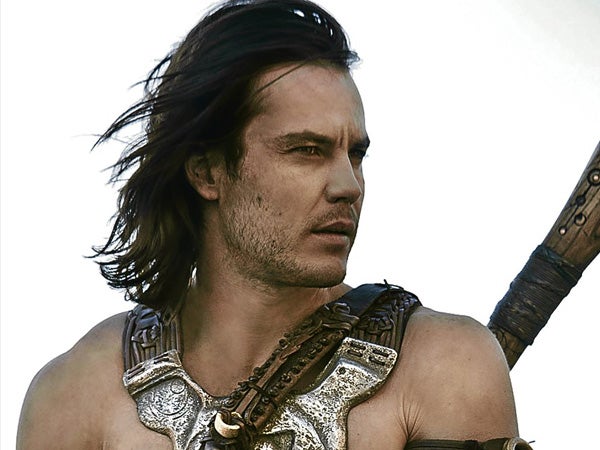 Walt Disney Pictures’ 3D action-adventure “John Carter” is based on the Edgar Rice Burroughs classic “A Princess of Mars,” the first novel in Burroughs’ Barsoom series.

Directed by Academy Award-winning filmmaker Andrew Stanton, “John Carter” is set on the mysterious and exotic planet of Barsoom (Mars). The film tells the story of a war-weary former military captain, John Carter (Taylor Kitsch), who is inexplicably transported to Mars where he becomes reluctantly embroiled in a conflict of epic proportions among the inhabitants of the planet, including Tars Tarkas (Willem Dafoe) and the captivating Princess Dejah Thoris (Lynn Collins). In a world on the brink of collapse, Carter rediscovers his humanity when he realizes that the survival of Barsoom and its people rests in his hands.

The year 2012 marks the 100th anniversary of John Carter, a now-legendary character created by Edgar Rice Burroughs in 1912. Considered by many to be the world’s first space hero, John Carter was first introduced to the world in Burroughs’ story “Under the Moons of Mars,” which was published serially in All-Story magazine before being renamed and published as the novel “A Princess of Mars” in 1917. Burroughs would go on to write 10  more books in what came to be known as the “Barsoom” series, Barsoom being Burroughs’ name for the planet Mars. Since the first book’s publication, some of the 20th century’s greatest minds in art, literature and science have credited it with inspiring and motivating their work.

Burroughs started writing the story when he was 35 years old. He was working for his brother at a stationery company at the time and used scratch pads manufactured by the company to create elaborate worksheets that helped him keep track of his plots, characters and timelines. Before he was finished, Burroughs realized he had no idea how to get a novel published and submitted 43,000 words of the story to the editor of All-Story magazine under the title “Dejah Thoris, Martian Princess.” Managing editor Thomas Newell Metcalf offered $400 for the serialization rights and promptly changed the title.

Science fiction writers Robert A. Heinlein, Arthur C. Clarke and Ray Bradbury have all credited John Carter as inspiration for their own work. James Cameron has cited the John Carter books as an influence on his epic science-fiction film “Avatar.” George Lucas credits Carter with inspiring the “Star Wars” movies. Writer Michael Crichton named one of his characters after John Carter. Scientist Carl Sagan read the books as a young boy, and for two decades a map of the planet Barsoom, as imagined by Burroughs, hung in the hallway outside Sagan’s office at Cornell University.

Today, you can still visit the site of Burroughs’ home, which he named Tarzana Ranch, in the city of Tarzana, California. It is now a thriving community blessed by the presence of a large forest of trees Burroughs planted around the home he loved.

A fan of the Barsoom series of books since childhood, director-writer Andrew Stanton (“Finding Nemo,” “WALL-E”) explains what inspired him to bring “John Carter” to the big screen in his first foray into live action: “I stumbled across these books at the perfect age, I was about 10, and I just fell in love with the concept of a human finding himself on Mars, among amazing creatures in a strange new world. A stranger in a strange land. It was a very romantic aspect of adventure and science fiction. I always thought it would be cool to see this realized on the big screen.

“‘John Carter’ is a big epic adventure with romance and action and political intrigue. Because the subject matter was written so long ago, it was also a bit of an origin of those kinds of stories—a comic book before there were comic books, an adventure story before that became a genre of its own.”