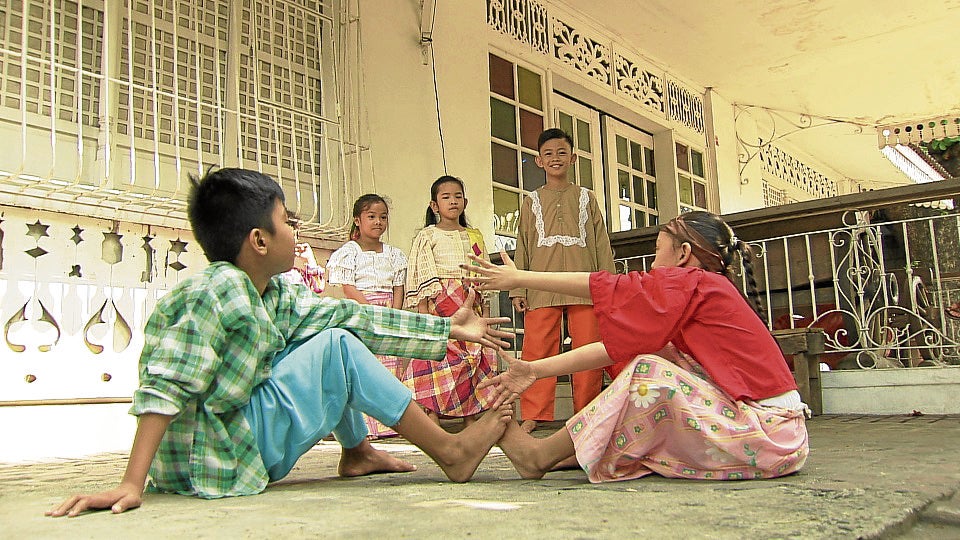 The 11th season of “Dayaw” opens with a gaggle of children playing in the courtyard of Bahay ni Kuya, the Pasay home of the Ramon Obusan Folkloric Group. The children play a variety of games like patintero, sipa, piko and luksong baka—casual sports that require only an open space, a couple of friends and a few props.

“Dayaw” in the past years has documented tangible and intangible cultures in the Philippines, particularly shining a spotlight on artisans like elder weavers, tattoo artists and craftspeople who are part of a dying culture. But in its sixth year, the long-running documentary series is featuring popular Filipino traditional games, as well as indigenous sports, traditional martial arts and rituals.

From Pasay City, “Dayaw” goes south to Lanao del Sur to document variants of sipa that require more skills. The Maranao’s sipa sa lama is strikingly different from the game that most Filipinos are used to. It’s a visual spectacle as well as a show of agility. The players are dressed in colorful Maranao formal wear, and are equipped with dalapi or shin guards to propel the rattan ball even further. Each player holds a khandat or sash, which they whip every time they hit the ball.

“Dayaw” also heads north to Hungduan, Ifugao, to film the postharvest ritual punnuk, where members of three villages gather at the junction of Hapao River to perform the tugging ritual. Other community members chant their prayer as the men in loincloth compete. The tradition has become a popular tourist attraction in the province, but the program further explains the importance of the ritual to these farming communities.

“‘Dayaw’ is able to document our schools of living tradition. These are rituals, traditions, knowledge, systems of our indigenous people that do not belong to the schools that we know. They are based in communities up in the boondocks, down in coastal areas, possibly even in caves, in far-flung areas, and we’re able to document them in ‘Dayaw,’” show narrator and Antique Rep. Loren Legarda told the media during the show’s season launch.

Lang Dulay, the late T’nalak weaver of Lake Sebu; Yabing Masalon Dulo, the B’laan master weaver who passed away earlier this year; and Apo Whang-od, the eldest mambabatok or traditional tattoo artist from Buscalan, Kalinga, are just some of the culture bearers who have been featured in the previous seasons of “Dayaw.”

Heritage towns, indigenous peoples like the Dumagat in Bulacan, even gabaldon structures were also recorded in the show, in hopes of telling their stories, celebrating their cultures and supporting their communities.

The documentary series is an offshoot of the National Commission for Culture and the Arts (NCCA) project of the same name. The festival was a venue for indigenous peoples from Luzon, Visayas and Mindanao to showcase their distinct music, dance and arts. In 2014, Legarda and ANC started the documentation of these groups and their unique traditions.

“The show goes beyond documentation. It revives culture, it protects and conserves our tangible and intangible heritage and we provide government assistance from the various programs of culture-based livelihoods namely sustainable livelihood program from the Department of Social Welfare, the Department of Labor and Employment’s pangkabuhayan program, the Department of Trade and Industry’s shared services facilities and of course the NCCA’s Assistance for Filipino Artisans program,” she added.

Indigenous peoples advocate Pablito Gonzales emphasized the program’s importance, especially during the pandemic, as native communities were not spared by the economic downturn brought by the health crisis.

“Our indigenous peoples have problems with regards to selling their products. Sometimes you think of sustainable livelihood for them, but right now many have stopped… We need this program to promote the intangible cultural heritage as well as the tangible,” he said.

“Dayaw” has so far aired 68 episodes, but Legarda said they have enough material to last another decade. The former senator said that there are also topics that could be revisited, like the alleged cultural misappropriation case of Apo Whang-od.

Even after 11 seasons, Legarda also noted that the program has found a growing viewership in younger people, owing to the show’s availability on YouTube and the youth’s interest in the topics.

“‘Dayaw’ is even more relevant now when so much information is available on social media. We see that ‘Dayaw’ is actually appreciated by many of the young because these are segments of our culture that perhaps they did not grow up with or they’re only seeing now,” she said. INQ“Dayaw” can be viewed