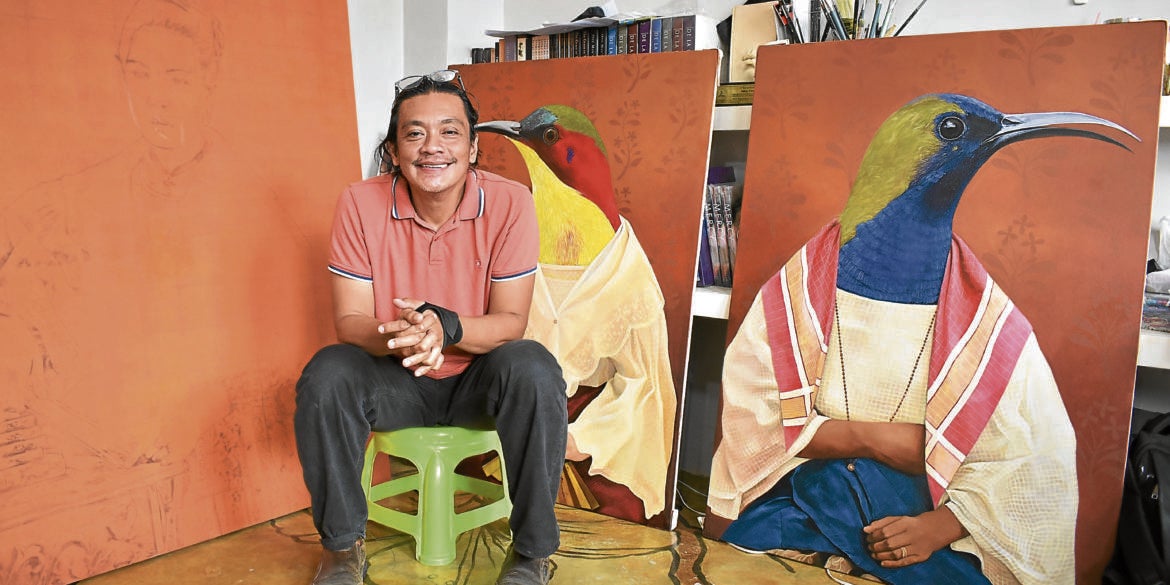 The artist with his work: “I am the original content creator in my paintings, while with a book, I just help shape it for its final purpose.”

When an artist holds his first-ever solo show 29 years after he graduated from his fine arts course at the University of the Philippines (UP), there must be a really good reason for the delay, and the output must certainly be worth the wait. For my friend Felix Mago Miguel, who made his mark in book design, a field I believe he undoubtedly dominates, it’s affirmative on both counts—and the reasons for the delay were both good and not so good, but ultimately purposeful.

On Aug. 28, this first show, “Album: Filipinas,” opened at Altro Mondo Creative Space Gallery, and will run until Sept. 19. In his notes, Felix calls it “a collection of portraits that tell another story.”

“Historically, portraits have primarily memorialized the known, carrying with them representations that outlasted even the persons they hoped to represent,” he writes. “Based on old photographs taken in the past … the portraits are annotated to tell … maybe the lost stories of the subjects themselves. The women in the portraits, who seemed originally nameless, are now named …

“Our history, the stories of ourselves, get lost in time when we stop acknowledging them—and in turn we lose a part of ourselves and suffer not knowing who we really are.”

The references are indeed erudite and fascinating, in no small part due to Felix’s many years of working intimately with outstanding volumes on a wide range of subjects, mostly Filipiniana and cultural (although we met doing books on the big blue sea). I’ve always considered Felix an extremely “literate” designer; by the end of a project, he’s read and understood everything in the book, which explains the success and quality of his work.

The show’s main inspiration, in fact, is, well, a book: “Sucesos de las Islas Filipinas” (Events in the Philippine Islands) by Antonio de Morga, a Spanish officer and lawyer who was based in the Philippines for over 40 years during Spanish colonial rule. The volume was first published in 1609 and is considered an important chronicle of the occupation. It was so influential, Jose Rizal published a version he annotated himself in 1890. In his notes, Felix quotes the national hero’s ultimate endorsement: “To foretell the destiny of a nation, it is necessary to open a book that tells of her past.”

Thus, you find dramatic portraits, with both bright and subtle colors, of women posed in exquisite Filipiniana, but with surreal, meaningful twists; as I told Felix, it’s like Justiniano Asunción or Simón Flores having coffee with René Magritte. From “Bella Inocencia’s” beautifully embroidered blouse grows the head of a tamsi, or sunbird, as mentioned in the 1898 song “Nuestra Patria” by Gen. Jose Alejandrino. The lyrics’ Tagalog translation became the later revolutionary anthem “Bayan Ko” by Jose Corazon de Jesus.

Then there’s “Paz Consuelo,” whose birdcage of a head reveals “a story of bondage,” a reference to the many indios beheaded in public executions. And then there’s the haunting “Dolores Pia,” head wrapped in cloth like a flagellant, with a bougainvillea crown of thorns, “ever suffering … trying to atone for her sins,” as the friars probably insisted she should.

“It was a dream and a plan that got set aside,” Felix says of the show in an email interview, writing from his home for the last 17 years, Tagbilaran, Bohol. “It’s the usual answer, kung bakit natagalan—I had to put family first, help my siblings. The financing to start a show was difficult to come by, even when I started getting more book projects.”

And then one by one the kids came for Felix and his wife, writer Amelia Zubiri, whom he met in UP, another reason this member of Ilustrador ng Kabataan also couldn’t subsist on picture book illustration alone.

“Twenty years ago, it was extremely difficult to just be an illustrator, so I expanded into book design. I can only say I’m blessed by the Lord; I just had to wait for the perfect time. I do wish I could have been painting more, but with the responsibilities of a being a parent and a husband, and with the projects we were getting, eventually painting got shelved. I just started thinking of the books as my ‘canvas,’ and I did my best.”

Which is not to say Felix wasn’t making his mark on a real canvas, so to speak, even then. There were group exhibits while he was still in school, thanks to the early exposure at Philippine High School for the Arts (PHSA). In 1989, a bumper year, he won second place in the Metrobank National Painting Competition, third place in the Shell National Student Art Competition and an honorable mention in the Titanium-Hiraya Gallery Art Competition, with all his entries dealing with Filipino themes. In 1994, he was one of three artists sent to the Quinta Bienal in Havana, Cuba, where he exhibited six mixed-media works.

And then, in 1996, he designed his first book for Bookmark, Soledad Lacson-Locsin’s translations of Rizal’s novels, “Noli Me Tángere” and “El Filibusterismo.” And he hasn’t looked back, over 100 books and a bag full of awards later.

“It was a challenge at first, then I started enjoying it,” Felix says of the work. “Of course, it’s a different creative process. With books, my aim is to interpret or translate the content into a beautiful package that can be read and consumed. It’s not my content, and I am just a collaborator. In painting, I do everything, figuring out the content, and interpreting it myself in a format that is appropriate. I guess to say it simply, I am the original content creator in my paintings, while with a book, I just help shape it for its final purpose.”

The use of both books and history as references was intentional. “I really wanted to use ‘Sucesos’ and the idea of an album.” Plus, there’s his longtime fascination with Philippine history. “So I wanted to do portraits, but I also wanted to do history, and that’s how I found a platform. And besides, I really do believe in that Rizal quote. I believe in history and its importance in shaping how we think and how we see ourselves. Rizal annotated ‘Sucesos’ because he saw that it was incomplete. A lot of the issues we have now are because we have a blurred, distorted, unsure self-image of who we are.”

Felix discovered a lot more about who he was when he relocated his family to Tagbilaran in 2005. “We wanted to bring our kids to a cleaner place. They were getting sick all the time, especially with asthma. It’s beautiful here. We love the birds, the sites, the sunrises and sunsets, the quiet, the sea. We love waking up to the beautiful songs of birds in our place, and going biking.”

Now 50, Felix likes to go on long bike rides across the island—either by himself or with youngest son Langit—which allows him time to commune with nature and refresh his spirit.

The place has also been great for Felix and Amel’s beautifully named, artistically inclined brood: Ulan is in multimedia, Ulap is studying architecture and finishing her first picture book, Angin is a scholar in fashion design at De la Salle-College of St. Benilde in Manila, Araw paints and Langit is officially a scholar at his father’s alma mater, PHSA.

The good news is, it won’t be such a long wait for the next chapter in this “book” of Felix Mago Miguel’s art. “This will be a series, and each show will be a chapter,” he says. “So I hope to be able to complete the ‘book’ after several shows. I am hoping that, when you see the portraits, you will ask yourself, do I know this person, these Filipinas? Because their story connects to every Filipino, past, present and future.”