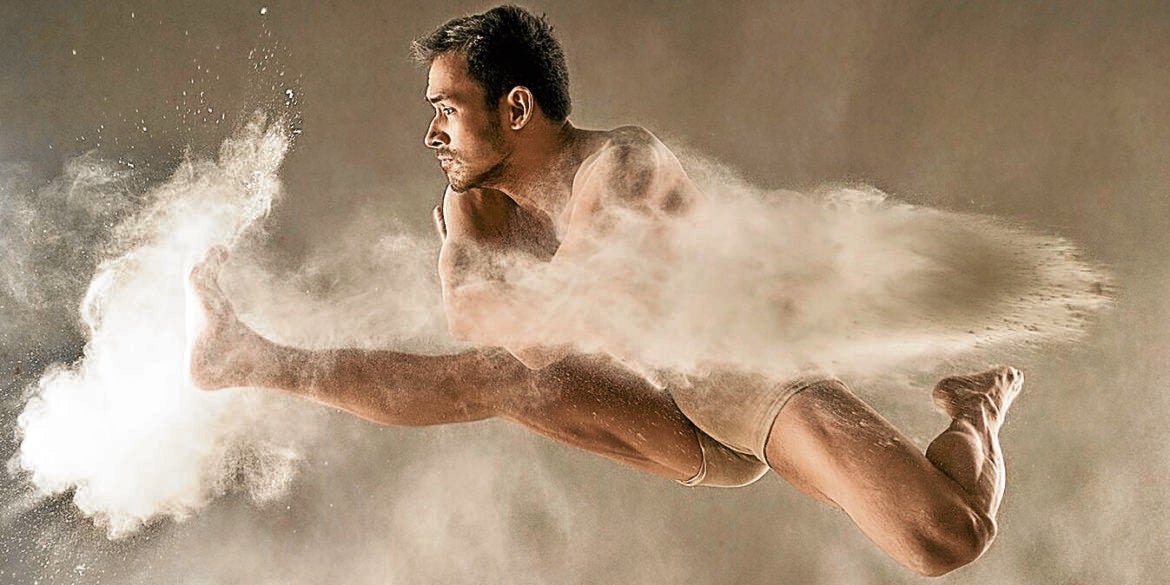 Like many novice actors, Patrick John “PJ” Rebullida tried too hard in his first-ever lead role. In 1995, director Bart Guingona staged an all-male cast for Repertory Philippines’ “Taming of the Shrew” wherein the female roles were performed en travesti. As Kate the shrew, Rebullida tried to prove himself but ended up belaboring his lines. It worked against him as he felt threatened by Noel Trinidad, his alternate, whose acting was unaffected.

During the technical run, he psyched himself to stop trying to impress and began acting from a place of honesty. Guingona came up to him afterward and affirmed, “You’ve found it!”

Rebullida went on to perform the press preview and got his fair share of shows.

“That was one of the biggest lessons in my performing life. I impart that to my students: Performing is not about trying to show how good you are, but to be in character and play out that life on stage,” he maintains.

Before the pandemic, Rebullida was a sought-after choreographer for musical theater, with eight nominations from 2016 to 2020. He was awarded twice for best choreography in a musical for “American Idiot” and “Newsies” by Philstage Gawad Buhay Awards and Broadway World. Both shows were produced by 9 Works Theatrical and Globe.Two years ago, he formed Galaw Co. Dance Theater, a small informal company which became the vehicle for his choreographic style of expressionism imbued with mind-body philosophies and emphasis on naturalness.

While other dancers struggle to survive amid COVID restrictions, Rebullida has carved a niche as a nurturing teacher via the Zoom classes of Galaw Co. His social media feeds are like antidotes to quarantine fatigue as he chronicles his planting and his heartfelt singing and dancing within a cramped space. At 40, he says he’s dancing better than he did in his 20s. He attributes the renewed strength and limberness to the continuous dance demos in his virtual classes and dancer-specific workouts.

Technique didn’t come easily. Rebullida was participating in a theater workshop for Trumpets when choreographer James Laforteza noticed that the former moved seamlessly and learned steps quickly. Laforteza wangled a scholarship for him at Steps Dance Studio despite Rebullida’s late age of 22. Between dance classes and recitals, Rebullida performed with Repertory Philippines and its children’s theater.

After getting a starring role in theater, Rebullida took a leap of faith by joining Ballet Philippines in 2007 at the age of 26. Daunted by the younger danseurs who were blessed with the ideal ballet body and solid technique, Rebullida made up for his inadequacies through his acting intelligence.

“Dancing is like playing cards. You give your best deck forward. My aces were playing character-driven roles. In the end, even if I was not as gifted as the others, I was given a lot of substantial parts,” he recalls.

Rebullida landed such roles in the classics as the sorcerer Rothbart in “Swan Lake,” and the mysterious inventor Dr. Coppelius in “Coppelia.” In modern works, he essayed the lead role of the chauvinistic Don Rafael in Alice Reyes’ “Itim Asu” and the antagonist, Padre Damaso, in Alden Lugnasin’s “Rizal Revisited.” Former Alvin Ailey American Dance Theater dancers Elizabeth Roxas and Max Luna III showcased Rebullida’s dynamic qualities by casting him as the lead in Ailey’s “Night Creatures.”

On a dancer’s advice, Rebullida went to Germany to find his element in its experimental dance scene. From 2010 to 2013, he was one of the soloists in Ballett Lüneburg, an ensemble company that emphasized artistic individuality. He likewise joined musicals produced by Stage Entertainment Germany.

“Manila’s environment was competitive. I always had to be my best because the artistic director and choreographer would be watching in class. I learned a different way of dancing in Germany. Classes were merely for warming up. When I got on stage, I was enjoying,” says Rebullida.

The Europeans’ critical thinking approach to creativity taught him to analyze, reflect, reason, explore unlimited possibilities and communicate his ideas. Dancers welcomed exchanges of ideas in creating a new work. The environment was a contrast to the docile Filipino culture wherein dancers accepted the choreographer’s instructions without question.

“I always knew I had a voice even as a dancer. I would be opinionated about how a choreographer approached material. Yet, as a dancer, I acceded to what the choreographer wanted, but I always gave my own flavor,” he says.

When he came home and started choreographing, Rebullida was loaded with ammunition. As a solo dance artist, he developed lyric variations of his own personality on stage. His style contradicted the conventional standards of perfection and beauty. Yet, his powerful stage presence earned him notice. Rebullida was nominated as Best Classical Dancer in Aliw Awards in 2016 and 2017 and Outstanding Performance as a Male Lead in a Modern Dance Production in Gawad Buhay in 2016.

His foray into musical theater choreography was accidental. Six years ago, during the preproduction of 9 Works Theatrical’s “La Cage Aux Folles,” choreographer Arnold Trinidad needed an assistant. Rebullida offered to be the dance captain, but the operations director asked him to help in the choreography. After a successful run, Trinidad and Rebullida were nominated for Best Choreography in a Musical in the Gawad Buhay Awards. Rebullida’s works in other musicals and a dance production have since been shortlisted for awards.

His choreographic style varied according to the nature of the musical. In “American Idiot,” Rebullida applied his learnings from Germany. He taught the cast of nondancers a system of body movements designed to amplify the performer’s capability for expressiveness. “It was a tapestry of movements based on intent. The gestures and the steps were transformed into verbs, nouns and adjectives,” he explains. His radical approach contributed to the edgy appeal of the rock musical.

On the other hand, “Newsies” delighted the audience with familiar genres of jazz, tap, gymnastics and ballet.

Last year, Rebullida was poised to work on a musical with Rico Blanco’s music when the pandemic put the live performance arts in limbo.

Rebullida and members of Galaw Co. had just concluded a series of performances. They welcomed the lockdown, as it served as a respite. As the lockdown extended, Rebullida started conducting free dance classes via Galaw Co.’s Instagram.

As funds started to dry up, he opened a Zoom account and offered classes for the price of a venti Starbucks Frappuccino. He and his dancers have since been giving classes in four-week cycles. As a nurturing mentor, he rekindled the passions of adults who used to dance, and inspired newbies to take the art seriously.

Last summer, National Artist Alice Reyes, head of the Cultural Center of the Philippines Dance Workshop, tapped him as one of the choreographers for the Professional Dancers Program. Reyes invited dancers whose companies had discontinued performances due to pandemic challenges.

Rebullida’s dance video is directed by Carlitos Siguion-Reyna, with Raffy Froilan as the director of photography. As of this writing, the video is in postproduction, while composer Jose Buencamino is working on his obra using percussion, digital music and cellos. It will be on YouTube in the last quarter of the year.

His dance, “Light, at the End of,” depicts the hidden meanings in the challenges of life. “It’s about accepting the cycles of life—birth, growth and death—with equanimity. There is a central figure watching over the ensemble who are going through their journey. The lead reminds them of the Light. The message is finding the joy regardless of where you are in life. I drew from my experiences as a plantito, watching plants from a seed to a sprout to giving fruit while other plants died. I saw the parallel after losing many people dear to me, who died in this pandemic. We have to deal with these situations as best we can,” he explains.

Rebullida’s advice? “Breathe. Don’t compare yourself with anyone, and move forward one step at a time.” —CONTRIBUTED INQ