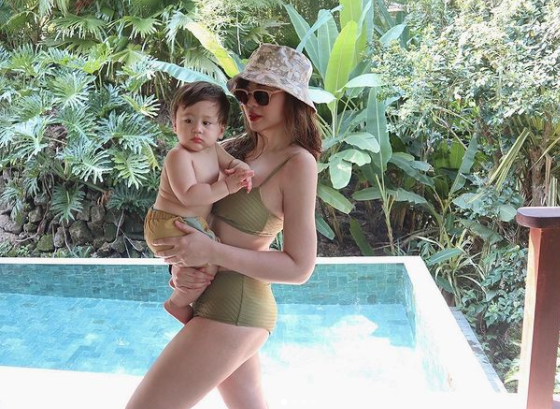 Janella Salvador made better by motherhood: Got a bigger battle to fight now

Motherhood has definitely brought huge changes to the life of actress Janella Salvador who shares baby Jude with her partner, actor Markus Paterson.

“In a big way, actually. Motherhood has changed my perspective. It just came naturally. Mother’s instinct kasi ay hindi mo inaaral (You don’t study mother’s instinct),” Salvador said when asked how motherhood contributed to her personal improvement during the online press conference for the digital anthology series “Click, Like, Share,” Aug. 26. The series started streaming this month on iWantTFC, and airs on the Kapamilya Channel, Kapamilya Online Live and A2Z every Sunday at 8:30 p.m.

(I feel that it helped me with my acting because the emotions I feel have become deeper, because it is like I have more purpose now. I got a bigger battle to fight now in life.)

Since the series delves on social media, Salvador was asked about her thoughts on negativities found everywhere online. For her, these are all irrelevant.

(About negativities, unless it is below the belt, I don’t really give them attention, because people base their judgments [on] a screen. They don’t really see what is happening since they are not there.)

In the series’ fourth episode “Barter,” Janella plays Janice, a character thrust into the dilemma of providing for her little sister when their mom died. She becomes an online seller and resorts to selling defective appliances until a customer figures in an accidental death.

Salvador gave birth in October last year. She and Paterson shared a vlog of the birth in their YouTube channel. JB