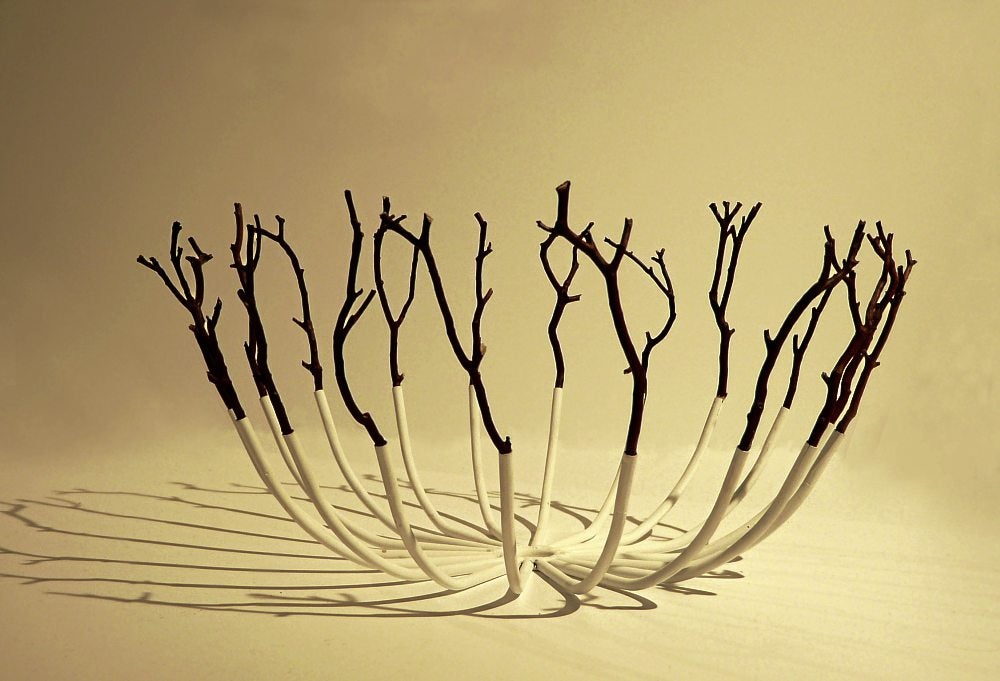 THE TWIG-LIKE New Organic Bowl by Ruiz was inspired by walking, improv music and Thoreau.

There’s a new crop of young designers bringing novelty into the furniture and accessories theme. Called Epoch Collaboration, the team is composed of artists who have lived and worked abroad. They came to the Philippines to reconnect with their roots and merge  their Western training with local indigenous materials and themes.

It all began when London-based designer Daniel Latorre Cruz came to the Philippines to visit the Cebu Next furniture fair. He met the Bacolod-based Christina Gaston, vice chair of Cebu Furniture Industries Foundation, who asked him to be design consultant for certain Negrense companies.

He met Japanese graphic designer Wataru Sakuma, who, in turn, introduced him to other balikbayan artists. Gaston invited Latorre Cruz to participate in the Cebu Next fair last year and told him to form a group, which subsequently called itself Epoch Collaboration. They presented themselves in the “Kagikan Project,” which means “return to the source.” A team from the Center of International Trade and Export Missions was impressed by their edgy designs and invited them to the Manila Fame.

The group will launch itself on March 16  with a transcultural theme at LRI Plaza on Nicanor Garcia Street, Bel-Air, Makati.

Philippine-born Daniel Latorre Cruz was raised in England, and studied Furniture and Related Product Design at Buckinghamshire Chilterns University College in High Wycombe. He worked under various furniture designers and makers in London. He travels frequently to the Philippines to rediscover his roots and draw inspiration from nature and new materials.

Breakthrough pieces: The Icarus lamp brought to the fore my design studio in London.

The split chair, bench and table for Casa Cebuana was an existing style but I had to rethink the design—furniture as split in two so you can separate them like two chairs and put them back together. It’s made of mahogany with cane backing.  The Ventana 445 chair drew raves at the Cologne Fair last year. It’s a stackable minimalist design that’s elegant and weather-proof and makes use of coco lumber.

Signature: In  London, I work as model maker. My work is about manipulating paper as I play with pulp. I have a knack for pieces that are playful. They also carry an element of surprise. For the Icarus lamp, it’s a narrative based on the opulence of natural materials and light. How I crafted it with my hands is an allusion to how Icarus created his wings.

For Hacienda Crafts, I designed a lamp that incorporated a table and flower vase made of twisted buri twines wrapped around a metal frame.

Favorite materials: I don’t focus on one. It’s more of the process. I’m trying to revive rattan by incorporating plastic rattan and powder-coated stainless steel. For the LRU show, I’m doing my take on the traditional wingback chair with rattan weaving, produced by Milo Naval’s Evolve.

The Japanese artist has been a long-time Tagaytay resident. He got his degree in Fine Arts major in Painting at Memphis College of Art in the US. He was granted a scholarship in New York for a studio residency program affiliated with Parsons School of Design in 2002. In 2004, he got a job as a designer for Masa Ecological Development Inc., a Japanese company based in Cavite which manufactures lamps, wall art, and tapestry using handmade paper. After winning awards for innovation in Citem four times, he was invited to be part of the consultancy program.

Breakthrough pieces: Home elements such as lighting, vases, tables and chairs using pulp.  The most visible are the paper tapestries. The Ribbon Chair is  a favorite.  Strips of tinalak and ribbons were coiled to make the seat.

Signature: I combine fine art techniques with the Japanese tradition of paper-making to create very complicated patterns. When I make lamps, I try to make them flexible so the end user can decide on the final shape.

Favorite material: There are many possibilities with pulp,  from solid to sculptural to delicate. Stanley Ruiz designed a speaker from pulp.

Breakthrough piece: Burnt aluminum metalwork at an exhibit in Gallery Astra in 2007.  The first client was architect Ed Calma.  In Singapore, the first commissioned sculpture was by  former beauty queen Mutya Laxa, who was then Pond’s global brand director. I  wooed her and she became my wife. We have two kids, Mayumi and Malaya. We work from home with my Buensuceso Art and Design, while Mutya put up Fpinkie for baby essentials.

Signature: Sculptures and furniture that are an intermeshing of lines, such as the Cocoon installation at the (PBA coach Vincent) Reyes residence and Doodle chairs, inspired by the bent and twisted lines of a child’s drawing.

Favorite material: Metal is very challenging. It’s hard to control the temperature to get the form. But it follows my orders. As a friend, it gives me a lot of ideas. For the LRI show, I discovered what looked like heads of dead Japanese robot in the junkyard. They were actually used to manually operate the mold jig for the rattan chair.  They will be waxed, enhanced and displayed as art piece. The statement: the resurrection of rattan.

After receiving his Fine Arts degree major in Industrial Design from University of the Philippines in 2001, Ruiz worked as a design consultant for a fair trade organization in the Philippines before relocating to Bali, Indonesia, where he designed home products for majors retailers in the US, Europe and Australia (Freedom and Baysis).  His works have appeared in the Museum of Arts and Design and New Museum of Contemporary Art in New York. His products were sold at Habitat, Takashimaya, Urban Outfitters, and numerous boutiques and galleries worldwide.

Breakthrough pieces: This New Organic line launched my independent design career.  I first showed it at the Designboom section of the International Contemporary Furniture Fair in New York in 2008. It celebrates the handmade aspect in modern design. Each twig was handpicked, cut and assembled.

Signature works: My design philosophy is to fuse nature, craft and industrial technology, and imbue them with meaning. Products tell a story by virtue of their appearance alone, without the need for text. I think The New Organic and RAW collections are essentially that. My recent works, like the Symbiosis (Log-Fi) speakers, also express the same language and poetry.

Favorite material: I like to work with found natural artifacts—branches, scrap wood, stones, logs. There’s something primal and poetic about them.  I get inspired by ruins, abandoned structures.

I’m showing a collection of root furniture at LRI, the materials of which are derived from the  roadside. I will also show sketches from the past 12 years which explain how my concepts evolve.

Born and raised in Vienna, Austria, by her Filipino mother and Austrian father, Cech comes home frequently to visit relatives and design for local companies.  While earning her degree in Industrial Design from University of Applied Arts in Vienna, she worked as an apprentice at Hacienda Crafts as part of a four-month internship, under the supervision of Christina Gaston. She designs for companies, keeping their image in mind, yet injecting freshness in shape and function.

Signature: My style is simple and functional. The corner table is a side table, available in both round and square designs, and is produced for Pacific Traders.  This table can be separated diagonally into four identical parts.  It can be used as one unit or a  single element that can stand against the corner. The two legs  are enough to provide stability.

Designed for Cebu Natura, the bubble table consists of a centered leg, shaped like a trunk. A glass plate covers the tabletop, which is an amalgamation of wooden rings.

Favorite material: I work from Vienna out of my laptop. I don’t get to see the samples of the materials until I come here.

For the LRI show, I’m making a wall-mounted uni-clock and a digital manipulation of faces.