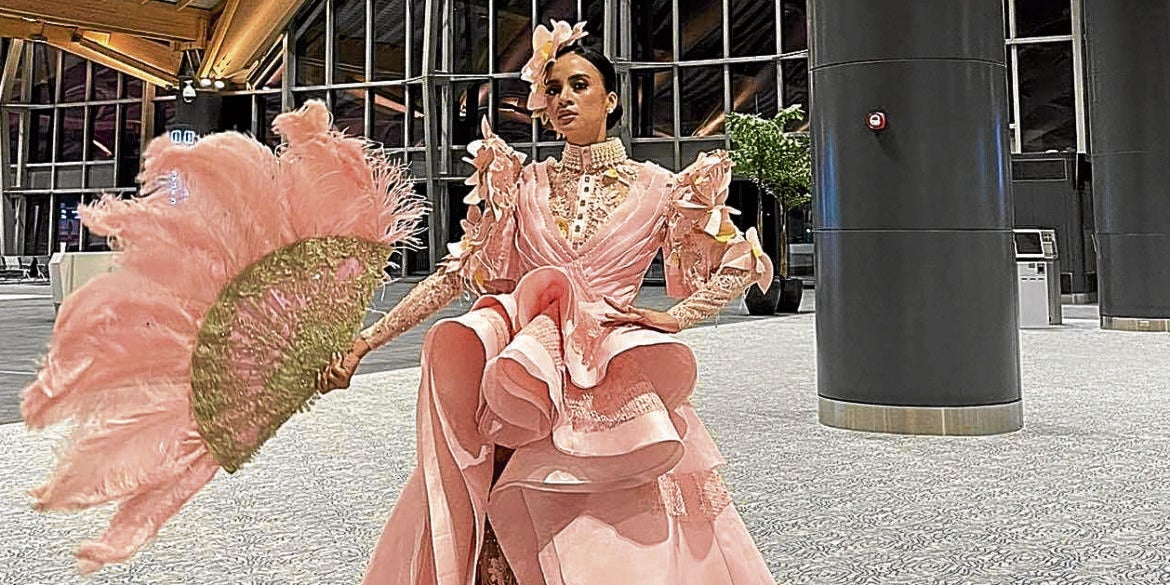 The national costume competition in beauty pageants allows designers to push their creativity and go over the top, but the look should be cohesive and representative of the region the candidate is from. The costume must be amazing without looking like a prop, and must follow a given theme, such as this year’s Miss Universe Philippines (MUP) pageant, which honors the elegance and sophistication of past Carnival Queens.

Manila Carnival Queens are said to be the “first Filipina beauty queens whose names are still remembered by historians and pageant aficionados,” according to the MUP Facebook page. “Their images wearing elaborate and intricate costumes live on in black-and-white photos,” and designers were tasked to interpret the contemporary Carnival Queen, to show the “Filipina beauty, heritage and artistry . . . in modern, traditional and avant-garde ways.” Two fine arts graduates show how. ‘Bakunawa’ gown

For Miss Universe Philippines Cebu City Beatrice Luigi Gomez, Axel Que created a detailed costume inspired by the mythical creature “bakunawa” or moon eater. Que, 28, explained the sinister bakunawa folklore on a Facebook post, but “decided to go with a more popular rendition of the bakunawa as a colossal sea serpent or dragon.”The incandescent gown looks like it’s floating; it’s done in blues, teal and lilac to mimic the bioluminescence of marine life. Que said the challenge was tying the bakunawa folklore with the Carnival Queen assignment, so she did the bodice in a “traditional silhouette” with updated terno sleeves.

The “fins” on the skirt are layers of micropleated organza, while the “scales” are metallic embellishments. A gold double-halo headpiece designed by Louie Gallego completes the look. It symbolizes the lunar eclipse when the bakunawa emerges. Que took up Fine Arts major in Industrial Design at the University of the Philippines Cebu, and fashion design at the Fashion Institute of the Philippines. Her design background allowed her “to study color, dimension and silhouette” in creating the bakunawa gown, which took a month to finish.

“It also helped me balance my work to know the limits of my creations. Design theories and studies also played a big part in making an artwork,” she said.

Que’s designs lean on the Oriental, mostly Japanese aesthetics. She takes inspiration from history, art movements, fashion revolution and anime, and she is now working on a competition piece for the gala event Mascota de Zamboanga.

Que accepts orders in her hometown shop in San Fernando, south of Cebu. Her clients are women who want to stand out and are “not afraid of opulence.” (Axel Que on Facebook; @axlaxelque on Instagram)Romantic barong gown

“I did a modern silhouette and color—powder pink with touches of yellow and old rose—not commonly seen on national costumes. I also added elements of the barong Tagalog in the collar and buttons, plus sampaguita accents and pearls,” Go, 34, said.

The result was a charming, voluminous ensemble combining Mikado silk, jusi, American tulle and lace, as he wants to be known for such texture experimentation. “I love fabric manipulation and creating silhouettes that are fresh on the eyes,” he said.

Go took up Fine Arts major in Advertising at the Far Eastern University, and fashion design at the Fashion Institute of the Philippines, where he learned the basics of fashion sketching, elements of design, construction and patternmaking. He is the creative director of his own shop, Oz Go Atelier, and Oz Go RTW.

“Studying design helped me to be more creative by applying art and art theory in my designs. A lot of my works are greatly influenced by visual artists, whether it’s sculpture, painting or mixed media,” he said. Go is working on his ready-to-wear Spring/Summer 2022 collection. Clients can go to his shop in Pasig City for made-to-order pieces.

“I often dress working women who are not afraid to dress up for work and a night out, women who love to experiment with silhouette, cut and texture,” he said. (Tel. 0916-4054311; [email protected]; @ozgoatelier on Instagram) INQ