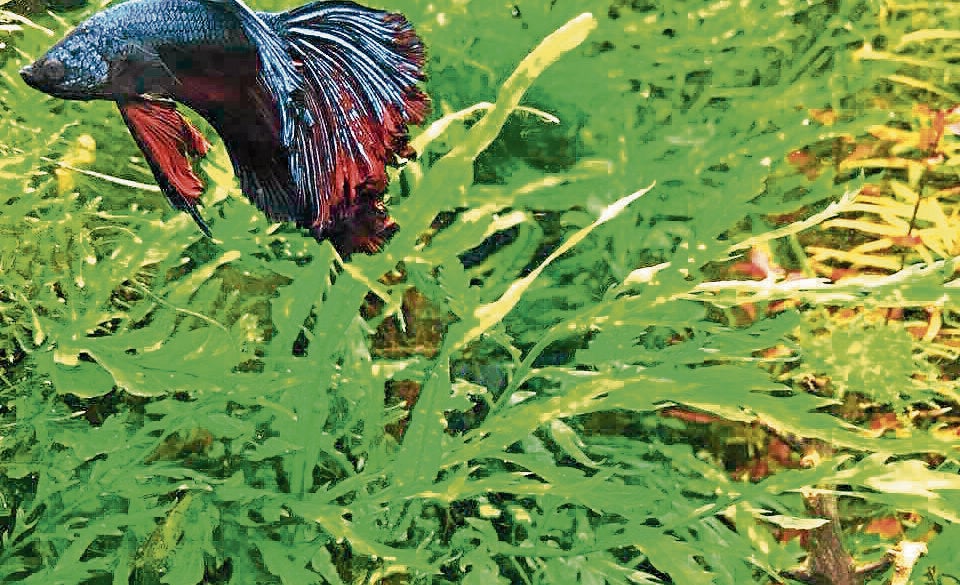 This is Nelson Paguinto’s betta, Max.

How to take better care of betta fish

They can survive in the murkiest of waters, but they should not be kept in that state

The Aquarium Channel used to air for free during the heyday of cable television. As the name suggests, all it showed was an aquarium filled with colorful fish and Muzak in the background. During the pandemic, many are recreating this experience at home by putting up their own aquariums.

One of the advantages of being an adult is that you can pick up a hobby, any hobby, and have it flourish as long as you are willing to invest time, money and care. There are many studies about the health benefits of keeping an aquarium. This includes lower blood pressure and anxiety level.

Information technology specialist Nelson Paguinto founded the Facebook page Aquascaping Philippines five years ago. It has over 52,000 members and is still growing.

Paguinto said that the number of online sellers and store ads have grown immensely during the pandemic. “[It has] come to the point where we limit selling to two days in a week. Online trade has been way up. We can’t have a lot of suppliers where there is no demand,” he said. For Paguinto, the active trading shows the rise in the number of hobbyists these days.

Francis Norman Lucas, a writer and a dad, is one of these hobbyists. He started just three months ago, not with a fish but with a nano tank. A tank is considered nano if it can hold 5 to 14 gallons of water. The size is ideal for desks or stands.

Lucas wanted to keep a fish for his 6-year-old son Nathan. But he enjoyed the process of setting up the tank so much that he ended up putting up three tanks.

Setting up an aquarium is a time-consuming but rewarding process, he said. “It’s like recreating the natural habitat of a fish or at least trying to come up with something that a fish will enjoy living in.” He chose to care for betta fish because of their looks.

Betta fish are popular for beginners because they are cheap and easy to maintain. They are the perfect choice for getting a hobbyist’s feet wet. One can be had for as low as P300. And boy, are they gorgeous. They have bright colors, iridescent scales and the males spread their fins when stimulated. They are so pretty that beauty pageants are held for them overseas.

Freelancer Steel Tuyay also got into the hobby this year. He began in August and, like Lucas, wanted to share his interest with his 3-year-old daughter Dasha. He originally wanted to get her a goldfish but ended up with a betta.

He kept adding and adding—today he is a proud owner of 23 bettas that live in their own nano tanks. And more are coming. He chose betta because they are easy to care for.

Tuyay said that he cleans them regularly because his tanks don’t have filters. He uses stock water treated with antichlorine solution or water conditioner. He also removes waste and leftover food every day to avoid causing ammonia in water which can be deadly for the fish.

Dasha’s responsibility is to feed the fish. Her dad supervises the feeding and hands her the pellets. It is a lesson on taking care of pets. He said, “One should start them young.”

Tuyay did a lot of research before he made his first purchase. It’s very important to learn how to care for the fish and prepare for their arrival. He is planning to get that goldfish and maybe a flower horn, but he’s still studying how to care for them.

“Study the things you want to do before you get into it. There are many resources that you can Google and find on YouTube. There are also Facebook pages that you can join. These groups will teach you how to prepare, care for and feed your fish,” Tuyay said.

“The male bettas, which have the bolder color and longer fins, are often alone in their container as they cannot tolerate another betta in a small space. They will fight to the death [for their territory], thus earning its name as fighting fish,” he said.

Paguinto added, “There are many types and price ranges. One’s budget is the first factor to consider. The fancier and rarer the color, the pricier it becomes. At a shop, male bettas are often placed in small containers and even in tiny plastic bags. I will not recommend buying from sellers that do not treat animals with care. Stressed fish don’t last.”

He also shared some tips on choosing which betta to buy. Color must not be dull, he said. Their fins should not have tears or white filaments that show fungus. Scales should also be flat and not raised because the latter indicates dropsy disease.

“Check the reaction by moving your finger close to the glass. Most bettas stay still because they are kept in a boring, tiny container, but a completely nonresponsive betta may be sick or close to dying,” Paguinto said. “If the visual check on the fish passes, choose a store that has generally clean tanks, clear water and healthy, well-kept fish. It tells you that maintenance has been good and your pet is in top condition.”

But it doesn’t stop there. The correct handoff is important when they get home. Most fish deaths happen because they are introduced to their new home without proper temperature and water acclimation, according to Paguinto.

He said that bettas are easy to care for. “They belong to the family of labyrinth fishes. They can take oxygen directly from the atmosphere. They can survive in the murkiest of waters, thus their reputation for being able to live in bottles or jars,” he said. “But that is a state of survival and they should not be kept in that state.”

In terms of food, he said bettas are not as fastidious as other fish. They will take in pellets and fish flakes.

He added that they are happiest with live food like brine shrimp, blood worms or mosquito larvae.

Paguinto advised to not overfeed or give them the same food all their life. He said that a balanced diet will keep them going well into their prime.

“What most people don’t know is that bettas can actually be in a community of different fishes as long as they are with other docile species and when there is enough room to swim around. Their fancy fins make them poor live-food hunters in the open water but they can get accustomed to hand feeding,” he said. “Female bettas can be kept together.”

A sorority of up to five female bettas will be fine. Male and female bettas shouldn’t be placed in one tank unless you mean to breed them. They should be separated once their courtship ends or the male ends up harassing the female, according to Paguinto.

Overall, bettas are easy beginner fish. They have attitudes and characters once you get to know them. “Mine sometimes pretends it is dead,” he said with a laugh.

Just because they’re easy to care for does not mean they don’t die. Again, proper acclimation is important and so is the care. Paguinto emphasized giving them the right environment. “Avoid keeping bettas in a tiny container. They deserve the right environment. Keep their water dechlorinated and clean, especially if you do not have a filtration system,” he said.

As for the equipment, he recommends getting the best that the budget would allow. This will be more cost-effective in the long run. The cheapest ones are great if you’re just testing the hobby out but they will not last.

“As an aquarist, good light, water filter and aquarium are the primary equipment to never skimp on. All three will essentially be doing their job 24/7 for many years,” he said.

“Do not keep fishes in tiny containers. The rule of thumb for fishes is one gallon for every inch of fish. As water changes are necessary in fish keeping, antichlorine solution is a must. Chlorine in tap water is fatal to fish.”

With love and care, expect your fish to be with you for a long time. INQ