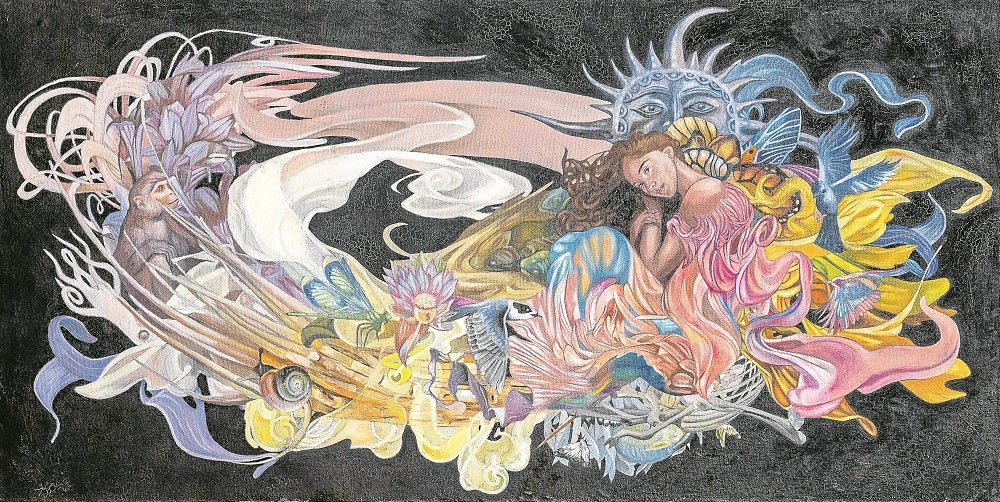 Unique among cities in the regions, Iloilo City has been promoting itself to tourists and investors despite the pandemic. The recent COVID-19 surge has forced Mayor Jerry Treñas to declare a “hard lockdown,” but this does not seem to stop the city’s tourism office from continuously running the by now familiar colorful ad promoting Iloilo tourism on YouTube and other social media.

The defiant optimism is reflected in the art exhibit “Ilonggo Republic,” now running at NCCA (National Commission for Culture and the Arts) Gallery in Intramuros. The first Manila solo show of 32-year-old Iloilo artist Kristoffer Brasileño, “Ilonggo Republic” is a dose of Ilonggo optimism for a COVID-19-harried and -harassed nation. It is a colorful celebration of buoyancy and resilience.

Brasileño, who teaches fine arts at his alma mater the University of San Agustin and also at the Central Philippine University, said collective optimism as well as collaboration is needed for the country to prevail against COVID-19.

“Over the course of the pandemic, I was able to continue my art production despite the challenges of constant lockdowns, the difficulty of online classes, and the constant fear for the health and safety of loved ones,” he said.

“In those moments, I found refuge in artmaking and experienced the many instances where it sustained my needs. I also saw how friends, family, colleagues and the art community helped me despite facing their own needs and challenges.”

Artists have a role to play during crises and disasters. “Living in a close-knit community like Iloilo City is comforting,” said Brasileño. “At the onset of the pandemic, local artists in partnership with the city government sold artworks to raise funds for masks and acquisition of vaccines. We raised a couple of millions through the sale. It was a small percentage of the amount needed to vaccinate the majority of the population, but in that small effort people saw our ability to take part in the affairs of the community.”

Gallerygoers are welcomed with a flower box on an all-yellow platform right at the entrance, its four panels graced by portraits of Panay women with their faces framed by colorful blooms.

The floral “art installation” prefigures the exhibit’s portraits of mainly women figures that to the artist represent the many faces of Iloilo. In “The Queen and Her Gift,” a young Iloilo girl wearing a salakot holds an icon of the Santo Niño, the Child Jesus image whose Catholic devotion is promoted by the Augustinians, the first missionaries in the country who evangelized Panay Island. The Santo Niño devotion is the biggest in the Philippines, bigger than the Black Nazarene of Quiapo. Iloilo itself is a center of Santo Niño devotion: Witness its Dinagyang festival every January.

Just as much identified with Iloilo and the Visayas as the Santo Niño is the Panay epic Hinilawod, so Brasileño has done a portrait of Nay Lucing, an epic chanter from Calinog, part of the long ancient line of binukot, vestal virgins and kept maidens of the indigenous group Panay Bukidnon whose task it is to commit the epic to memory and pass it on to the next generations.

The title of the work, “Keeper of Our Myths,” is likewise defiant of the historicist tendency to dismiss myths or to use the word pejoratively. Brasileño reaffirms in striking visual terms what the literature scholar Northrop Frye has asserted about myths: that they are “sacred stories that tell a society what it is important for it to know.”

The pre-Christian and the Christian meld in “Edenic Rupture,” which, in its searing, tensile and very kinetic composition, suggests the break or rather, cosmic continuum, between the primitive and the evolutionary, and the anthropological and the feminine. Once more humanity is represented by the woman who’s surrounded by whirling flora and fauna, the flux of nature governed by the maternal.

The floral motifs that flank the women-portraits reinforce the Panay iconography, the rose and the white lily being Catholic images widely associated with the purity and beauty of the Blessed Virgin Mary.

The exhibit layout supports the floral motif. “Installations of scattered flowers are used as part of the curatorial concept,” said curator Delan Robillos. “They speak not only of Brasileño’s fondness for beauty but also of the cycle and evolution of the llonggo artist’s art and artistry.”

The only male figuration here is the artist’s self-portrait or rather, half-face portrait. “Brasileño shifts the gaze back to him as his likeness stares at his audience, half of his face absent from the frame,” writes writer Allyn May Canja in the exhibit notes. “He is part of the community that he portrays.”

The mounting of the exhibit at NCCA Gallery is gorgeous. Yellow and gray are the color motifs. They’re the Pantone 2021 colors of the year, Robillos explained, referring to the New Jersey-based firm that issues the color matching system used in graphic, product, and fashion design and printing and manufacturing industries. The color combination exudes optimism and positivity.

“‘Ilonggo Republic’ is sending the same message,” Robillos said. “Artists from the regions are doubly affected by the pandemic that shook the world, but Kristoffer Brasileño will continue to create and express himself and his art will continue to grow and blossom.” —CONTRIBUTED INQ