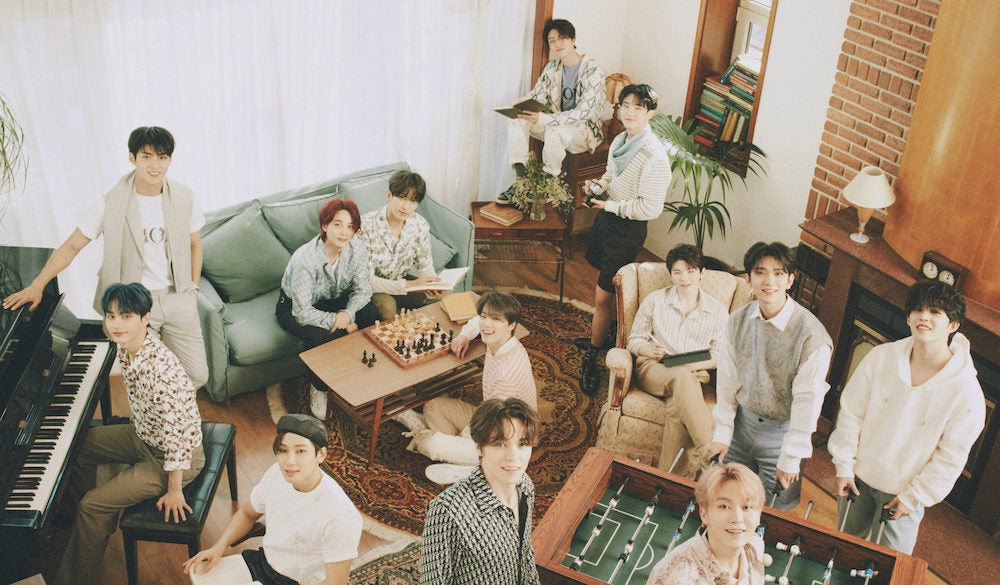 It’s impossible not to mention the intriguing choreography, self-produced tracks, and humor when talking about Seventeen. The 13-member group has become one of the top boy groups of K-pop’s third-generation—with an iconic discography that weaves between high-energy songs like “Aju Nice” to more emotionally resonant tracks like “Don’t Wanna Cry.”

While I could wax poetic about their musicality and powerful performances, I’ll save that for a different day. Ahead of the group’s comeback on Oct. 22 for their upcoming album “Attacca,” I’m looking back on the moments that cemented their status as one of the funniest groups in K-pop.

There’s a lot of facts about Seventeen that don’t seem real. Hoshi’s incredibly Gemini natal chart that reached astro Twitter is a prime example. Mnet releasing the group’s hilarious comeback song featuring Hoshi and DK back in 2017 is another.

In matching sweatshirts, the two members keep a straight face while doing silly dance steps to the straightforward song. The beach backdrop makes it extra campy. Every year, Carats bring this video back. As we should!

“Just Do It” is a novelty single by subunit BSS (BooSeokSoon) consisting of Seungkwan, DK, and Hoshi. The subunit lives up to its reputation as a gag trio. As you can tell from this choreography video, they sometimes put on an act as a simple-minded but enthusiastic bunch. It’s definitely a feel-good performance.

Fun fact: BSS has a number of fanboys who are not afraid to loudly express their support.

The group’s variety show “Going Seventeen” is one of the most watched in K-pop. The show has greatly showcased the group’s comedic skills. It has a number of recurring concepts such as the “Don’t Lie” mafia games and “TTT” camping trips.

One of my personal favorites is the “Debate Night” series where two teams are asked to debate on absurd topics and provide equally ridiculous arguments. In its third installment, one of the questions was “If you can have one superpower, would you choose water shooting out of your armpits or fire shooting out of your bottom?”

Another fairly recent episode that made me laugh a lot was “Ad Genius.” Here’s the video description to give you an idea of what went down: “Please refer to the ‘involuntary ads’ production log we have attached that is guaranteed to win over the hearts of any and all advertisers.” With their ridiculous self-made ads, they deserve to snag a deal for cup noodles, or even their dream car commercial.

Ever wished that a concert you’re attending had a never-ending encore? It’s exactly what Seventeen are gifting Carats in their never-ending “Aju Nice” performances that takes even the members by surprise and has them running back on stage.

It’s such a great hype song too, sure to have you jumping along even after the five consecutive times the staff plays the song. You definitely need to prepare yourself if you’re attending Seventeen’s concert.

If you have a ton of mutuals with wild posts, Seventeen will fit right in. The group usually reserves their wackier posts for WeVerse. Last November, Jeonghan posted a photo of a ripped-off callus on his palm. “Woozi thought of me and gave me his heart-shaped callus. Thank you, Woozi. I love you too,” he wrote in the caption.

They also host funny V Lives. In the “Become the Dresser Drawer of the Dorm” live, Jeonghan kept calling Carats dressers. We love a good POV video, even as a piece of furniture.

If there’s one group that would invite their fans to a Zoom encore for a “Music Bank” win, it would be Seventeen. The boys did an encore performance of “Ready To Love” and some even used a screenshot of “Music Bank’s” announcement as a background.

As expected, it got a little rowdy. Hoshi put his head inside a Frosted Flakes cereal box, ever ready to spread his horanghae (which roughly translates to a mix of tiger and I love you) agenda.

While there are so many funny Seventeen moments that live in my mind rent-free, it doesn’t make us forget that they are top-class musicians first and foremost.