Rica Peralejo on sibling relationships: 'A belonging like no other' | Inquirer Lifestyle ❮ ❯ 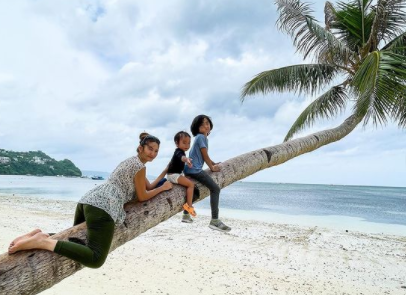 Rica Peralejo on sibling relationships: ‘A belonging like no other’

Actress-vlogger Rica Peralejo misses her own siblings now living in the United States. She credits them for having been used by God to “mightily [minister] healing” to her from her mental health battles. She thus hopes that her own children would have the same loving sibling relationship.

She spoke about people’s relationships with siblings on her Instagram page today, Oct. 12, sharing why siblings can be beneficial to one’s growth and development. She also showed a photo of her children, Manu and Philip, while sleeping.

“[No] one in the world will ever understand the pains and joys of being under your parents except your brother or sister. I think primarily, that is the best about having a sibling,” she explained.

“As a parent, I know my shortcomings and sometimes I can only pray that when the day comes that pain registers in their hearts because of things we’ve said, not said, done, not done, they will be there for each other to say with a knowing look, ‘Me, too.’”

She thinks having a sibling is like having a best friend who will be at your side through thick and thin.

“There is a belonging like no other in a sibling, especially when they have taken good care of that relationship,” Peralejo said. “Another thing I have [realized] in life is that to have a sibling is to have an automatic kakampi (ally) in life. I know everyone can be wrong about a lot of things, but you always need that one person who will stick by your side no matter what. I fervently pray this will be Manu to Philip and Philip to Manu.”

She believes that “siblings can have this relationship with each other because they are simply related but not obliged to be each other’s authority” or any other type of influence.

“The freedom from any rules of engagement makes it a very relaxing, unpretentious, freeing relationship. It’s one where you can just be without the fear of being cut-off,” she explained, while also recognizing that there will still be siblings who may need to cut off their own siblings, and siblings who might be cruel to their own siblings.

As for those who do not have any sibling, Peralejo offers them a prayer to find friends with whom they can have sibling-like relationships. JB

Rica Peralejo’s warning to those who dream of entering showbiz