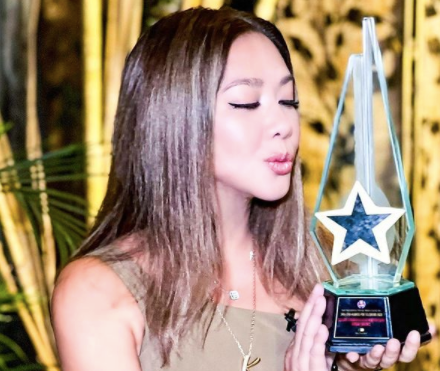 Broadcaster Korina Sanchez is positive that a silver lining is in the offing for multimedia artists.

Sanchez, recipient of the Excellence in Broadcast Lifetime Achievement Award during the 34th Star Awards for Television held virtually by the Philippine Movie Press Club (PMPC) last Sunday, spoke up about how the pandemic wreaked havoc on broadcast journalists.

Sanchez recalled the hardships everyone went through in her Instagram post yesterday, Oct. 18, where she shared a photo of herself holding her Star Awards trophy.

“The past two years [must’ve] been one of the most difficult times in history for many, and specifically, for those of us in the broadcast industry,” she recalled.

(Many of us struggled to work due to the pandemic, and the oppression was doubled by the closure of our home network ABS-CBN. The careers we worked hard to build and the future we planned – all were put at risk. Until now, we are still struggling.)

“And it is in that hope for better times when we can again flourish in responsible freedom, in measurable expectations, in courageous truth-telling that is unoppressed if even rewarded, that the likes of me try to adapt, reinvent, survive and refuse to end,” she said.

“Ramdam ko, papunta na tayo doon ulit,” she stressed. “Kailangan lang pagtiisan ang paglaban para sa nasimulang kabutihan.” (I can feel we are headed there again. We just need to endure the fight for the good we have started.)

“In more than 30 years doing what I do in broadcast I’ve seen oppression, censorship, struggle and then victorious freedom,” she added. “[Sa] pagbabalita, sa pag iinterview, sa paglalahad ng mga kuwento ng pinaka matayog at pinaka simpleng mga buhay ng Pinoy.” (In delivering news, in conducting interviews, in telling the stories of the highest and the simplest lives of Filipinos.)

Sanchez thanked the people she’s worked with in MBS channel 4, the Lopezes and ABS-CBN, Brightlight, and TV5 and A2Z for “sustaining the passion and keeping the torch burning.” She also thanked Star Awards for taking notice of her efforts in “trying to make that contribution and difference.” JB

LOOK: Korina Sanchez gets surprise visit from twins Pepe and Pilar for birthday