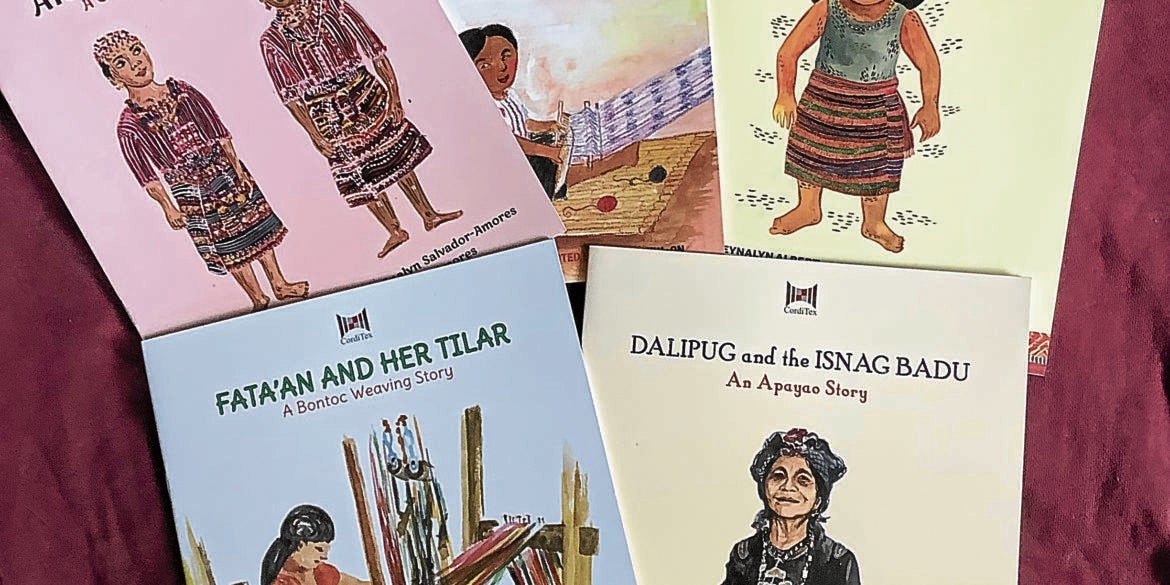 These children’s books are a joyous invitation to weave

There are five children’s books recommended for adding to young readers’ collection: the “Agabel Tayo!” (Let’s Weave) storybooks on weaving. They come right in time for the observance of October as Indigenous Peoples’ Month.

One of the five, “Aramay’s Sinnon: A Ga’dang Weaving Story,” written by Margareth Balansi and Analyn Salvador Amores, and illustrated by Justine Gabriela Amores, has been selected to participate in the 2021 Frankfurt International Book Fair.

Amores, one of the series’ researchers and authors, said, “The storybooks are part of the Cordillera Textiles Project (Corditex) of the University of the Philippines (UP) project on popularizing weaving for younger children. This is funded by the university. These are stories of master weavers that the team met along the fieldwork in the Cordillera region.”

Corditex is an interdisciplinary team based in UP Baguio. She said, “We conduct research on Cordillera textiles.” To produce the books, the Corditex team collaborated with the source communities where the writers were master weavers, cultural bearers and researchers.

Amores, an anthropology professor and curator of Museo Kordilyera at UP Baguio, narrated her own fascination with highland weaves: “I initially got interested in funerary textiles in the Cordillera. I was researching on death rituals, and observed how textiles played a significant role in the life cycle rituals in the Cordillera from birth to death, even to the afterlife.”

She continued, “From there, I worked on the trade of textiles from archival to historical data, and saw the diversity of textiles used by indigenous peoples in the Cordillera. I conducted anthropological research on the textiles of the different weaving communities, from production, materials used, dyeing, patterns, to the narratives of master weavers. Many of the Cordillera textiles are already extant. We as researchers need to intervene so as to revive the textiles again.”

She said Corditex has “an archive of textiles collected from the field. I also have some relevant collection given as gifts or bought from master weavers.”

The initial print run of the books went for free to different public schools in the Cordillera region, most especially to communities where the master weavers came from. Amores said the second printing was sold at cost just to recover the printing costs. —CONTRIBUTED

The storybooks are available at museokordilyera.upb.edu.ph; Mt. Cloud Bookstore at 1 Yangco Road, Baguio; and Shopee.