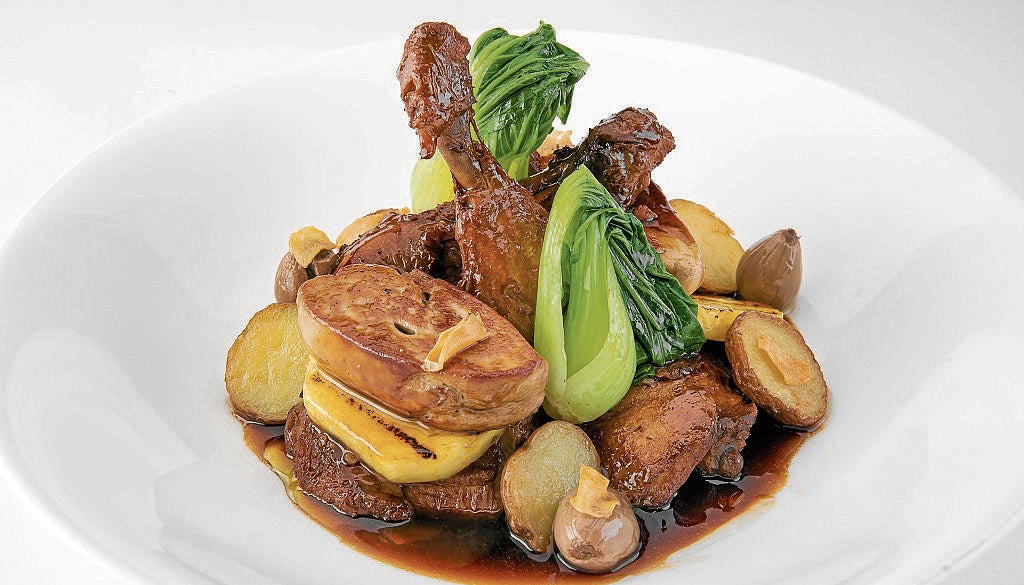 Adobo with foie gras and other Filipino classics reimagined

Nüwa refers to the mother goddess of Chinese mythology who is responsible for creating mankind and saving the world from destruction. It is also the name of one of the luxury hotels at City of Dreams (COD) Manila. It might seem an unusual name for a hotel, but the deity personifies classic Asian refinement, something the brand lives by.

When coming up with a handle for Nüwa Manila’s new restaurant, the group naturally turned to another goddess to represent the establishment. Haliya is the masked warrior of the moon worshipped in precolonial Ibalon (present-day Bicol Region). Symbolizing strength, it is also the name of the latest restaurant addition to COD’s elite roster.

Taking over the space formerly occupied by Crystal Lounge and The Tasting Room, Haliya serves modern Filipino cuisine and does so by reimagining the classics with subtle innovations. At the helm of the kitchen is 40-year-old chef de cuisine Edmundo San Jose, who refined his skills abroad and won multiple awards before moving back to Manila in May 2016 to work in COD’s banquets.

“By combining the traditional way of cooking Filipino dishes with the creative techniques I learned in my two decades of exposure to Asian and international cuisines, I am delighted to offer new interpretations of Filipino classical dishes in the Haliya menu,” he said.

His unique iterations were apparent once the appetizers were served because the lumpia looked nothing like the bronzed rolls I am used to. It came as a tartlet with lobster and crab meat held together by calamansi aioli cradled in a thin baked shell. It was crowned with chili threads and an almost transparent chip made of malunggay. A douse of aligue sauce added richness to the otherwise refreshing bite.

The Binalot na Cochi reminded me of Thai larb, where meat salad is placed in cabbage cups. Taking the place of traditional ground meat were shreds of cochinillo and adobo flakes, layered with papaya atsara, jalapeño and tomato salsa, nestled in butterhead lettuce.

The Guisantes at Malunggay Sabaw looked and tasted like the Spinach Egg Drop Soup. Haliya’s version, though, had a bolder green color with trails of a 63-degree organic egg and shards of lechon skin. It lent a subtle earthy flavor akin to the Chinese soup.

The dishes listed under Pangunahing Ulam included viands enjoyed in many Filipino households, like afritada, pakbet and bistek Tagalog. But the components hinted at how the chef played with them. Singkamas confit, kasoy puree, paksiw glaze, and sweet camote fondant were among the items that piqued my curiosity.

The Kare-Kare had slices of fork-tender US Angus beef brisket slow-cooked for a whole day, while the Bicol Express had slices of sigarilyas accompanying a medley of seafood—tahong, hipon, lapu-lapu, tulya and pusit—on a pool of bagoong-spiced gata.

The Haliya Adobo came as an ensemble with twice-cooked chicken with grilled pineapple, marble potatoes, baby bok choy and hefty chunks of seared foie gras. It was a cast that surprisingly worked well together and gave variety and elegance to rather plain fare.

Even the panghimagas, aka desserts, were touched with a bit of inventiveness. Emerging as an early favorite in the pack was the Chichingka, Haliya’s own bibingka cheesecake. Theirs closely resembled a soufflé, soft and airy. It had a vanilla aroma, and the sweetness, though subtle, was balanced by the finely grated salted yolk.

Haliya’s fare is not fine dining. All dishes are, in fact, for sharing, much like how Filipinos enjoy their food at home. But by serving a contemporary take on traditional food, the restaurant does intend to make a statement. And that is to prove that our cuisine can look refined without losing its true flavors. INQ