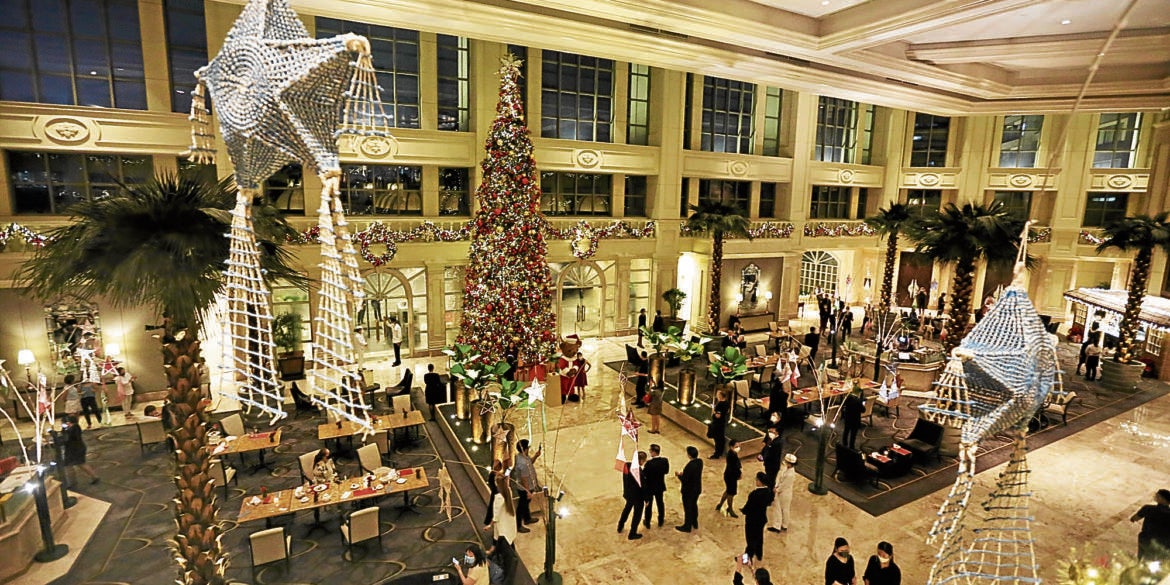 Like many creatives, Baguio-based designer Claude Mark Caro Wilson transformed the isolation in the lockdown into an opportunity to create new products. While others were unemployed during the shutdowns, Wilson continued to give business to the artisans who made prototypes for Caro Wilson, his namesake home accoutrement and jewelry brand.

Early this year, Wilson and his suppliers shared that December 2020 was the worst Christmas season ever, owing to mounting financial woes, COVID fears and the lack of the festive spirit.

As an antidote to the despondent scenario, Wilson started to develop a parol, the native star lantern whose appeal lies in its lightness and translucence. While the parol reflects man’s fragility at this time, it likewise symbolizes optimism.

The result of his quarantine was a minimalist parol using indigenous materials of a bamboo frame, wrapped in three different textures of abaca fabric. The sinamay is a gossamer, fine-woven, grid-patterned fabric, while the rough gumon is commonly used in gift bags. The most popular among Wilson’s variants is the abaca twine parol.

“I wanted the parol to suggest an illusion of delicacy, although the abaca is very tough. I wanted to brighten the world with hope,” he says.

Some 80 minimalist star lanterns are juxtaposed with the Christmas décor at The Lobby of the Peninsula Manila till Nov. 30. Wilson pitched his idea to bring the star of positivity to The Pen, which bode well with its reopening after a series of shutdowns.

Wilson explains that because of the coarse weave and weight of the gumon, the lantern is open on the sides to reveal the silver-painted framework. In contrast, the sinamay lantern is like wrapping bamboo in a transparent material.

“The gumon is masculine and architectural while the sinamay is feminine; its fineness is a reference to the barong Tagalog,” he says.

Buyers often ask if they should put a light inside the parol. “I’m a lighting designer, but I don’t want light inside because it’s a glare source. It’s like looking directly at the car headlights,” maintains Wilson, who has a master’s degree in lighting design from Parsons School of Design in New York. The parol is best lit from the front or up from the floor.

After the holidays, the tails of the lantern can be folded up and stored away till the next season. The bamboo has been treated with an antitermite and antirot preservative.

“My design philosophy is that things must be made to last. They are made by hand, using sustainable materials, work functionally and are aesthetically fantastic,” he says.

Since the lanterns are sold discreetly, guests can approach the Caro Wilson desk at The Lobby. “This is the Peninsula. There are no tent cards here. It’s too hard sell. If people inquire, the staff will direct them to us,” he says.

The exhibit-sale of parol coincides with his forthcoming pop-up at Old Manila, “I Need a Little Christmas Now,” which will run from Nov. 15 to Nov. 19. This annual event of Caro Wilson presents how traditional Baguio crafts are adapted for contemporary usage.

Baguio pines are charred and shaped into block chairs, inspired by New York artist Sol Levitt’s modernist modular structures from the cube. The solihiya weaving lends the nostalgia of tradition.

Wilson presents the virtuosity of the Baguio weavers who manipulate metal into herringbone weaving, a reference to the bilao, the native winnower.

“The artisans pour metal into sheets, cut them into strips and weave them as if they were rattan,” he says. These are painstakingly entwined into tubular bracelets in silver and vermeil, metallic trays, lamp shades and tabletops.

His jewelry, dangling earrings and woven bracelets using filigree techniques, are arranged in a vitrine.

The highlight of the Caro Wilson showcase will be a benefit dinner on Nov. 19 at Spices, featuring a Bicolano-inflected, four-course menu by chef de cuisine Alan Briones and guest chef Margarita Fores, who volunteered her services.

The beneficiary for the P7,000/plate dinner and a percentage of the sales from the parol (whether from the Caro Wilson Instagram @carowilson.shop or at The Pen) is Steps Foundation, founded by his family friend, Sofia Zobel Elizalde.

On Nov. 19, scholars of Steps will perform with the Caro Wilson parol as their props at the hotel’s mezzanine. The dinner will be held around Spices’ poolside.

Wilson admires the democratic culture at Elizalde’s Steps dance school wherein the affluent danced with the underprivileged in the same studio—before the viral outbreak. “Sofia can’t get enough male dancers unless she sources them. These boys will need funding. Rich parents from Forbes Park aren’t going to put their boys in a ballet school.”

When Elizalde established Steps in 1994, she saw many talented and dedicated dance students who wanted professional training but couldn’t afford the tuition. She established a scholarship program that provided Filipino students and dance teachers equal opportunities in top quality dance education.

Many scholars have since landed in major local dance companies. Former scholars Elwince Magbitang is a member of American Ballet Theater Studio Company, while Rey Vince Pelegrin is on his third year of scholarship at the prestigious Jacqueline Kennedy Onassis School of Dance in New York.

As of press time, Elizalde is in New York. In an email to Lifestyle, she wrote, “I feel blessed that despite the pandemic, individuals and artists such as Mark Wilson have approached us to be the recipient of a certain percentage of their sales. This pandemic has encouraged the spirit of helping, especially after so many have lost loved ones at this time and so many have suffered. There is a greater intention of giving back and giving hope for new beginnings.”

While dance studios are still closed, the classes have become virtual for nearly two years. Elizalde hopes that restrictions would ease and more people would have been vaccinated by 2022 so that face-to-face classes could resume.

Writes Elizalde, “The foundation will never stop finding ways to support our scholars. Our plan is to continue providing excellence in dance education. This pandemic has allowed us to reflect on how we have been doing things in the past and how we can strengthen our training as we move forward. Myself, along with all my teachers and staff, are dedicated to giving the best we can, no matter what! We look forward to a brighter year ahead. Mark’s parol is the perfect symbol of hope and true Philippine spirit.”