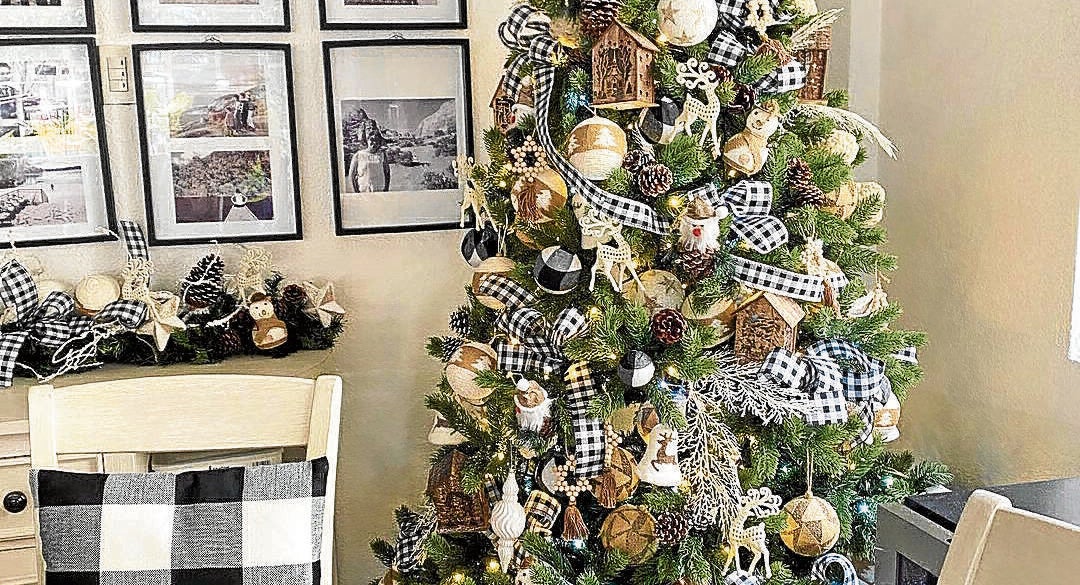 Upcycle: Clever (and cheap) ideas to refresh your Christmas tree

Aubrey Miles wraps old balls with plaid ribbons for a farmhouse vibe; marketing exec Charmaine Pamintuan does the same with fabric from Kamuning

Aubrey Miles has plenty of titles. She is an actress, singer, host, entrepreneur and social media influencer, but you could also call her the Queen of Pandemic Hobbies.

Miles is known for her love of plants. Her plantita journey is well documented on her Instagram (@milesaubrey) as well as different news outlets, including Lifestyle.

Recently, we discovered that she has also spent her free time covering old Christmas balls with fabric to breathe new life into them. The actress put up not just one, but two trees last month or exactly 90 days before Christmas.

“Never too early for the kids,” she wrote on her Instagram. Miles has two kids with actor Troy Montero—Hunter, 13, and Rocket, 2. She said her kids helped out in hanging the balls this year.

Her Christmas tree is designed with black-and-white buffalo plaid ribbons, ears of wheat, acorns, white and gold balls, wooden houses and other whimsical Christmas details. The plaid is repeated on the dining table runner, throw pillows and the garland hanging over the window.

“I’ve always liked buffalo plaid. It reminds me of our house in the United States. Now that we can’t travel yet, I just want a country/barn theme,” she told Lifestyle. She even wears her love for plaid. We’ve seen the actress in a plaid sweater wrapped around her waist in one of her IG posts.

“I covered some balls with black plaid. I couldn’t find any checked/plaid balls online so I got some ribbons instead and wrapped them with it,” she said. The process took her days, but the results are worth it. Her handiwork looks unique and expensive.

Her second Christmas tree is a slim eight-foot tree that she placed by the stairs. It has red plaid and is decorated in a similar way to the main tree, except that the decorations are in red. She said she has two trees because she doesn’t want a single big one.

Miles changes themes every two years. She chooses themes according to what she sees in movies or TV series. She keeps some of her decor around but she also disposes of others by selling them after the holidays.

She doesn’t hire a stylist for her tree because she likes thinking of the concept every year.

“I like decorating my tree. It’s therapeutic,” she said.

Charmaine Pamintuan also customized her Christmas balls by wrapping them in fabric. The chief marketing officer of KFC Philippines said wrapping old balls with fabric is more economical than buying new ones.

“We wrapped old balls in red and white fabric that we bought from Kamuning. We tied them up with red and white ribbons to prettify them,” she said.

The family worked on the tree together since everyone is working from home. They put up their tree early because they want to infuse good vibes into their home.

“The fun part was doing the wrapping of the Christmas balls together. We discovered that the ‘process’ of making it new again, doing it together, was a good bonding moment for us,” she said. The moment was priceless. They kept away from their laptops and phones. They faced each other and had real conversations.

Pamintuan said the theme for her trees usually follows the colors of the company she works for, hence the red and white tree this year. Two years ago, she was working for Goldilocks, thus, their tree was in gold and yellow. It was blue and white when she was working with the Inquirer.

“We change our theme each year as a way to make the holidays exciting. We used to buy new decorations each year to match the theme so we ended up hoarding and stocking the old ones,” she said. Because they already had so many, they decided to upcycle old decorations.

Pamintuan comes from two big clans. They used to spend Christmas Eve with her mom’s side of the family, and Christmas Day with her dad’s. This year, they won’t be able to do that. But they will continue their tradition of sending each other prank gifts.

“I told my brother, who’s into motorcycles, that I would give him complete motorcycle rider gear. He was excited, only to receive a GrabFood jacket, shirt and delivery box,” she said.

Once, they treasure-hunted for their gifts inside the house. They do everything to make each year memorable and fun. INQ