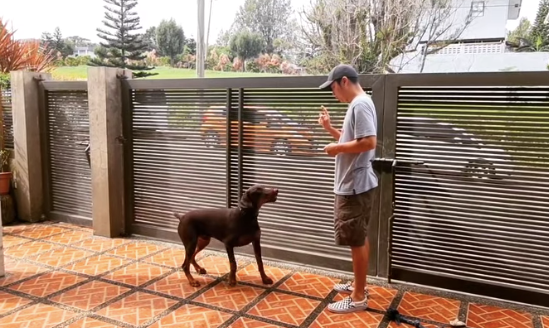 Why Chito Miranda decided to hire a dog whisperer

While Parokya ni Edgar frontman Chito Miranda considers himself a good dog trainer, he decided to hire a dog whisperer for his pet Gaston.

Miranda explained how he came to that decision in his Instagram post today, Nov. 14, where he shared a short video of his dog Gaston doing some tricks.

(Gaston is already 8 months. But he is still super mischievous, though there has been a huge improvement. There are still a few bad behaviors that need to be corrected, like biting on the bike seat, this time, it’s Miggy’s bike, and being too playful with Riley.)

Miranda considers himself a “good dog trainer” since all his dogs, including Gaston, have learned how to “sit and stay.” But for Gaston, he decided to ask for help from the Pinoy Dog Whisperer. He narrated how the dog whisperer Lester Zapanta was able to train Gaston in 30 minutes how to walk without pulling the leash, something he finds difficult to teach his dogs but seemed easy for the trainer.

Miranda also compared Zapanta to Cesar Milan of the TV series “Dog Whisperer,” saying that while he learned how to lead the pack from Milan, he learned how to interact better with dogs through Zapanta. Miranda is excited for the next lessons. JB