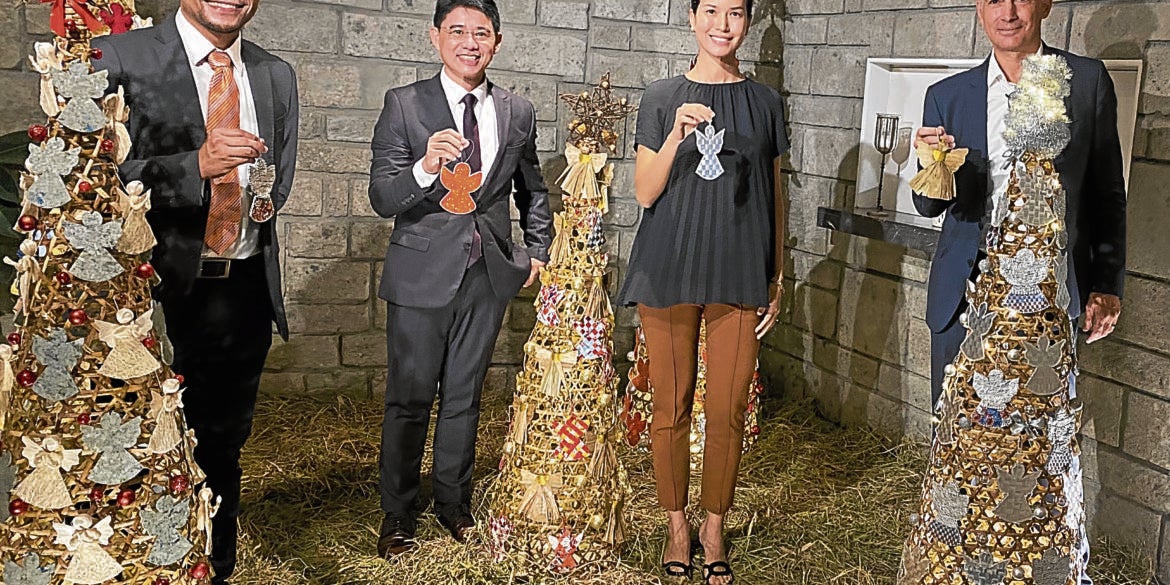 One woman’s charity for one antipoverty program has spawned into a nationwide campaign.

At the launch of Angels for Angels, Switzerland Ambassador Alain Gaschen said this fundraising initiative was about ordinary people doing ordinary things in extraordinary times.

Decorative angels, created from organic and recycled materials by women’s livelihood groups, will be sold by collaborating parties including Lazada and the website of Philux, a furniture company founded by a Swiss national. The proceeds will go to such beneficiaries as the humanitarian organization World Vision, and women and children’s groups impacted by the pandemic.

Last year, Daniela Gaschen, the wife of the Swiss ambassador and a professional designer, produced a video tutorial showing how to recycle Nespresso capsules into Christmas tree angels. Nespresso is one of the companies under the Swiss food-and-beverage multinational Nestle Group. The Bacolod-based Negrense Volunteers for Change (NVC) produced these tiny angels and sold over 10,000 pieces. The project raised some P1 million.

“You can bring your expertise for a good cause,” said Daniela. This year, she created the angel template which could easily be rendered in various materials by different groups.

The ambassador approached several organizations to widen the scope of the program. Women’s nongovernmental organization Samahan ng mga Pilipina para sa Reporma at Kaunlaran (Spark) Philippines approached local governments, which, in turn, recommended women’s groups to participate. Spark likewise invited Calzado, who had worked with them during the Marawi rehabilitation, to spread the word.

Daniela spoke with Maxwell and her sister, Stephanie Kienle Gonzalez of Philux, to decorate the Christmas trees with the angels for another charity partner, SM premier malls in NCR, Cebu and Davao.

Gonzalez and Maxwell styled the trees from the top to the skirt. Each tree carries a different theme while highlighting the angels and Swiss partner companies. For instance, the tree with Lindor Lindt chocolate wrappers bears the company colors of red and gold. The angels are complemented with traditional ornaments such as Tivoli lights, gold and silver branches, gilt leaves and balls.

The livelihood groups had inspiring stories to tell. Marylib Casador, a seamstress and trainer, visits Gifts and Graces Foundation’s partner groups in Taguig, Pateros, Pasig and Bagumbayan to teach unemployed mothers how to sew. These partner communities fashioned angels from woven scrap materials from inabel and Yakan weaves, supplied by the Habi Philippine Textile Council. Casador said the sewing jobs enabled women to get by during the pandemic.

Many of 664 inmates of the Quezon City Jail Female Dormitory for Women have been charged with drug abuse. Under the Office of the Mayor, livelihood programs were organized as part of their correctional behavior. The women have been sewing pillows, tote bags and doing beadwork.

In making the angels, there is an assembly line of inmates with different tasks from cutting red eco bags into angel figures and gluing on the cardboard to adding glitters and other accessories. The police officers said that in the past, families of these inmates would send money. Thanks to these livelihood programs, these women are now giving back to their loved ones. —CONTRIBUTED