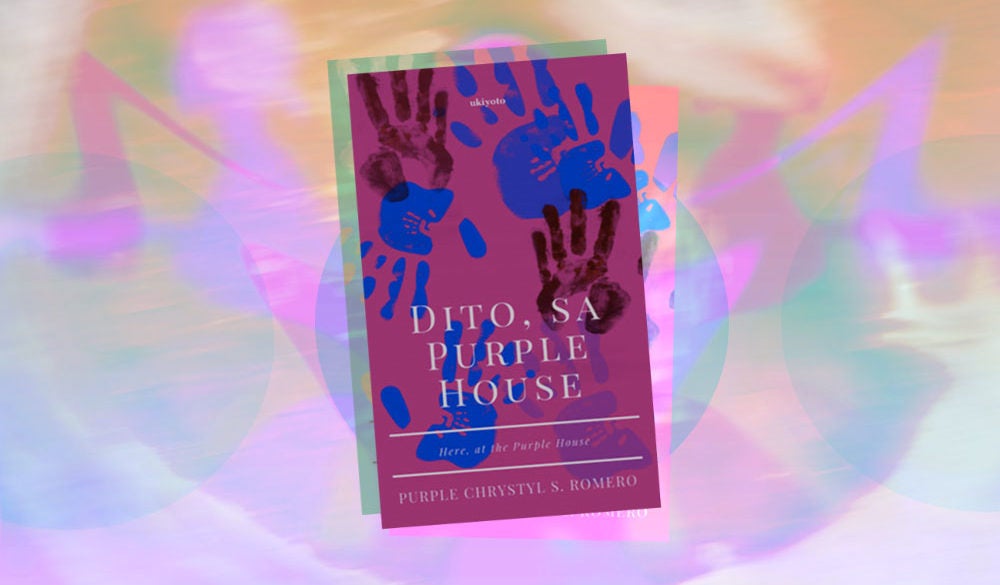 Shelters, found families—those are essential in queer communities. Many queer folk struggle with homelessness and unemployment because of their queer identity, be it from homophobic parents or transphobic employers. These communal, makeshift shelters (often not an actual registered shelter, but the spare room or the couch of a queer sibling or elder) are how we take care of each other. You see a version of this in FX’s “Pose,” which has a drag queen starting a drag house in which she becomes the mother figure. And these halfway houses are not just for queer people, but for anyone who needs a place to stay.

A shelter like this is the backdrop of “Dito, sa Purple House,” a mixed Filipino and English novel by journalist Purple Romero. The eponymous Purple House is a place that welcomes in everyone: “student writers who lost their office after the government withdrew funding for them because the university publication was deemed too ‘subversive,’” young unpaid scientists, and people turned away by their parents. One temporary resident of the house, Joy, was shunned by her tita for supposedly being a communist. Another, Yesha, was a brilliant student thrown out by her dad after finding her stash of condoms.

The book follows its two protagonists: Ira and Sade. Ira is a Korean woman who moved to the Philippines to learn English, a trek that many young Korean students make. Meanwhile, Sade is a Filipina with an OFW mother and a grim family history. The two meet in a bar in Los Baños as students.

It’s not love at first sight for them, though. While Ira is intrigued by Sade and her brazen confidence in asserting her sexuality, she finds herself falling in love instead with a student radio broadcaster, her Ate DJ, who she ends up publicly serenading. However, a man (of course it’s a man) ruins the tender sweet moment by taking a video of it and posting it online. The video finds its way to virality, and ultimately to Ira’s homophobic parents.

Ira’s parents soon cut her off, and, upon learning of her predicament, Sade takes her in. The two then make a home for themselves in Sade’s tiny room, with them eating pancit canton and Ira teaching Korean on the side to get by.

This is where the Purple House comes in. After Sade’s mysterious landlady suddenly entrusts the whole house to her, the two turn it into a refuge. And while doing so, the two fall in love.

“Dito, sa Purple House” is a tender story, but also a realistic one. The social realities that Ira, Sade, and their friends face mirror our own: relatives thinking you’re a subversive communist rebel and red-tagging you just for being critical of the government, domestic abuse, and homophobia. A common thread is family trauma. Sade’s father is physically abusive, while Ira’s queer sister was forced to marry a man. As Romero said in an email to me, “‘Dito, sa Purple House,’ tells the story of a woke Korean and Filipina who tried to navigate love and life in the time of political and health crises.”

Fair warning: While “Dito, sa Purple House” is short (the copy I got clocked in at 49 pages), the romance itself is a slow burn. The story takes us through different decades and stages of the girls’ lives—some together, some apart. I’m not going to spoil what happens (again, it’s very short, you can allot the time to read it), but I’ll leave you this quote: “Baka masira ang Purple House if ever hindi sila mag-work-out. Magiba ang haligi, gumuho ang Pundasyon.”

While reading it, the story reminded me a bit of those classic 90s and 2000s josei manga, like those written by Ebine Yamaji and Kyoko Okazaki and serialized in “Feel Young” and “Young You.” There’s a certain vibe to it, a maturity and frankness in its tone, that harkens back to that style of writing.

If you’re interested in reading it, you can buy a copy of “Dito, sa Purple House” through Shopee. I’ve seen what y’all have mass ordered this 11.11 sale, you can stand to add something a bit more meaningful to your carts.