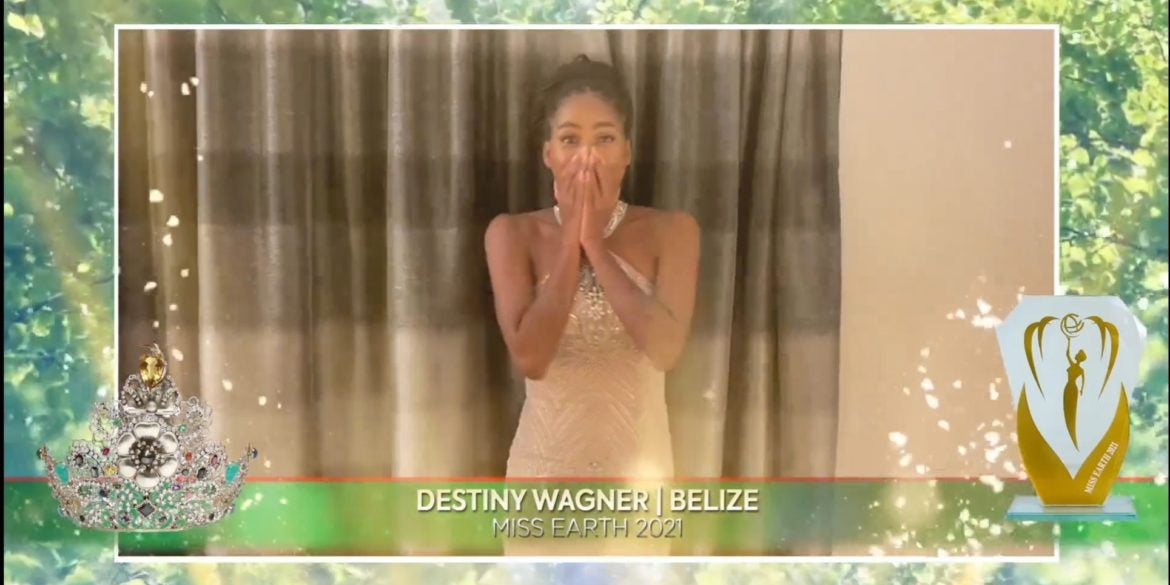 Destiny Wagner of Belize is the new Miss Earth./SCREENSHOT

MANILA, Philippines—Belize finally has an international pageant winner with Destiny Wagner, who bagged the 2021 Miss Earth crown in virtual ceremonies conducted on Nov. 21, inheriting the crown from Lindsey Coffey of the United States who also won in the competition held online last year.

This is the second consecutive year that organizer Carousel Productions conducted the global tilt virtually because of the COVID-19 pandemic. Various limitations to mobility, and the ever-changing restrictions, including those for individuals coming from other countries, have made it challenging to host over 80 international delegates in the Philippines.

The international beauty pageant has been staged in the Philippines every year since its inception in 2001. It only went outside the country twice when it was hosted by Vietnam in 2010, and by Austria in 2015.

For the 2021 competition, Wagner bested 88 other aspirants for the crown, to become the newest global ambassador promoting the conservation of the environment. This is the first time that Belize advanced to the Miss Earth’s final round.

Marisa Butler from the US settled for the Miss Earth-Air crown, while Romina Denecken of Chile received the Miss Earth-Water title from her predecessor Roxie Baeyens of the Philippines.

Naela Alshorbaji of the Philippines finished in the Top 8. She also took home the gold medal in the preliminary evening gown competition.

Unlike other international pageant organizers who postponed their respective competition, Carousel Productions decided to continue staging the competition, conducting it virtually to adhere to the “new normal.”