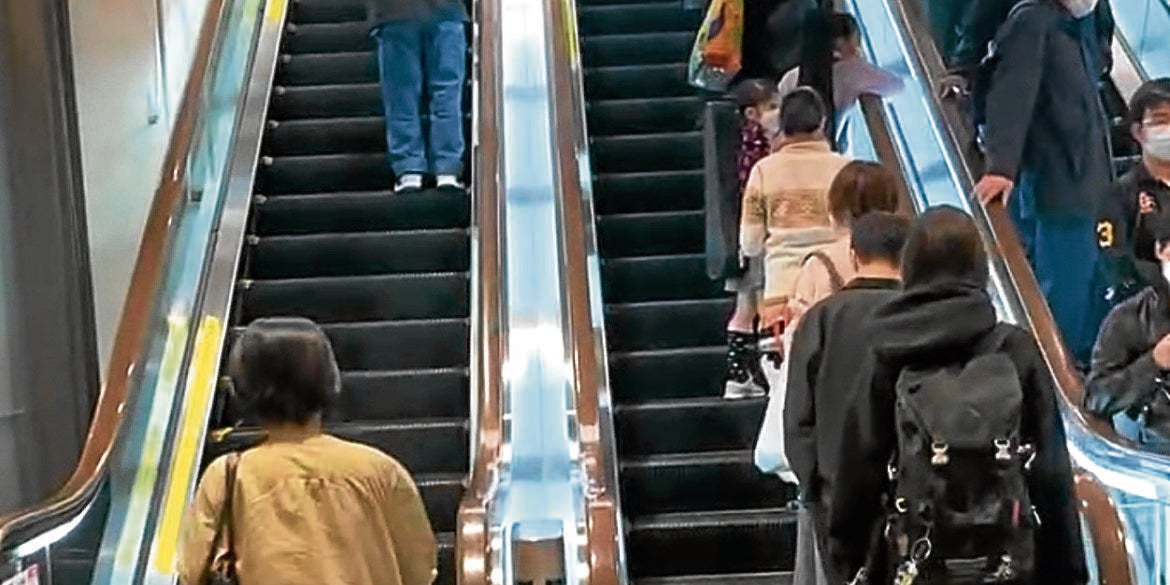 People usually stay on one side of the escalator to let others pass.

How living abroad changed me

“Nag-iba ka na. (You’ve changed).” My friend Carlo said this to me over early dinner after I made a request from a waiter at a café in Cubao a couple of years ago. I was still living in Singapore then, but I had to take a short trip back to Manila due to family duties.

Whether one likes it or not, consciously or unconsciously, it seems one inevitable truth about living abroad is that it does change you. You think you’re still the same person, until a friend from back home points out a thing or two.

Perhaps aging also has something to do with it, as well. Five years since I left Singapore, as I hiked my way up Kobe’s Mt. Rokko to celebrate my fifth year of living in Japan, I thought about how the island nation I never imagined I’d move to had changed me.

The Japanese are known for their punctuality. You may have heard of how a local rail company made global news after it apologized for departing the station 20 seconds early.

It wasn’t much of a challenge adjusting from “Filipino time” to “Japan time.” Punctuality was instilled in me during my growing-up years. Being an altar boy, we were required to be in church 15 minutes before the Mass to make sure everything was ready. That sense of punctuality was something I carried with me to my adult years.

The Japanese concept of time is on a whole different level, though. My manager once scheduled a trial lesson with a prospective preschool student. On the day of the lesson, the mother called to say they were running late due to an unforeseen circumstance.

I’m not kidding. This precision is experienced almost everywhere. Two minutes can spell the difference between boarding an express train bound for Narita and a local train you really intended to take. True story.

The concept of omoiyari is somewhat similar to the Filipino concept of malasakit, simply put. On rainy days, shops usually have a plastic cover for your carrier bags. Going to an izakaya? There will almost always be a basket for your bag or hangers for your coat/jacket.

On most buses, passengers are reminded to be mindful of their bulky luggage that might inconvenience others. On most train lines, announcements remind commuters to refrain from talking on their mobile phones or from speaking too loud.

Unconsciously, you also become more mindful of your surroundings and try to ensure you are not a nuisance to the people around you. Is my music playing too loud? Is my voice too loud?

I think the only time I hear people talking in raised voices is on Tokyo’s Yamanote Line on a late Saturday night. Everyone has had their drink and are on the shuuden, or the last train. This is not always the case when you travel to various parts of the country. People are people, after all.

I enjoy the urban jungle. However, moving to Japan made me appreciate nature even more. Tokyo is great but when I lived there, I looked forward to escaping the concrete scenery and heading to the mountains to be recharged by nature.

And of course, every year, the entire nation is painted pink around March to April as the sakura trees start to bloom. For me, autumn brings more excitement, though. Once the usual deep, verdant green mountains turn into a splash of vibrant reds, yellows and oranges, you get an inkling of why, centuries ago, poets were inspired to write poems and artists whipped out their brushes.

Perhaps one reason the country is efficient is because of the presence of rules, both spoken and unspoken. For the use of humble chopsticks alone, I can name five rules they have in under a minute. Exchanging business cards: I can think of another five rules. Visiting someone’s house? Remember to take off your shoes at the genkan (entryway). And bring a present. Taking the escalator? Don’t forget: In Tokyo, people stand on the left side; in Osaka, people stand on the right side.

Once, I wanted to buy flowers for my friend’s mom because she was cooking for us. Thankfully, I asked the florist about my choice because it turned out the bouquet I thought of buying was meant for visiting one’s family grave.

The good thing (or not so good thing?) about being a foreigner is that you can play the gaijin (foreigner) card if you commit any faux pas and the locals would almost always let you get away with it. And in cases where one is not sure about to do, just look around and do as the locals do.

With more than 2,000 hot spring towns and more than 25,000 hot spring locations, onsen or hot springs have been part of the Japanese culture as early as the 6th century. It took about a year before I became comfortable with being completely naked around other people. Now, going to an onsen in fall or winter is something I definitely look forward to.

The next time you come to Japan, try going to an onsen with a rotenburo (open-air hot spring bath). Just bear in mind: No one cares that you’re naked, and the purpose of the onsen is to relax and recharge one’s mind and body.

Also, once you soak in the onsen, you most probably will forget the people around you and just admire the view of mountains, trees, or the ocean with your body submerged in hot, sometimes scalding, water. —CONTRIBUTED