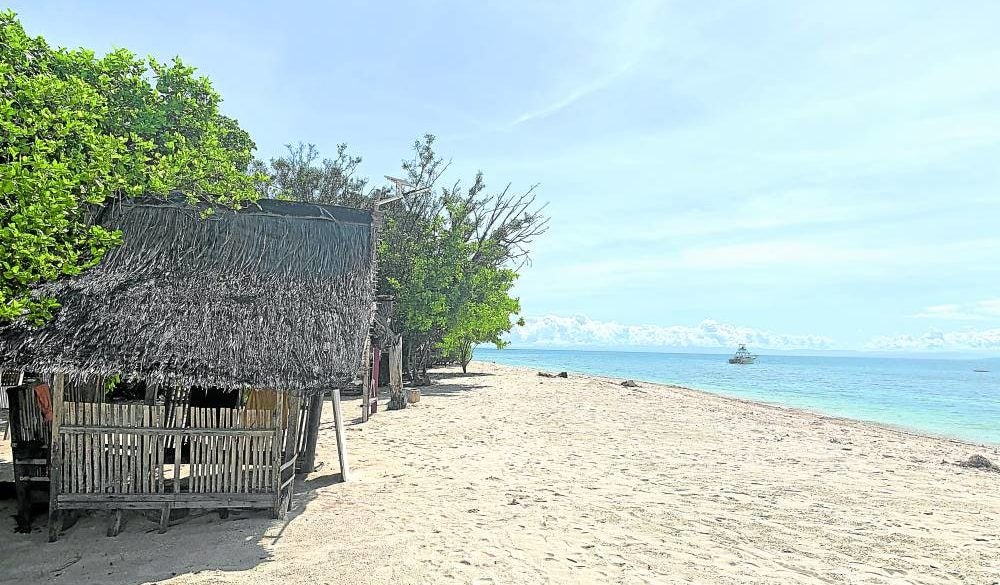 Mantigue Island is a great spot for swimming and snorkeling, but watch out for sea urchins!

Come again!” Camiguin locals said during my five-day stay on the island north of Mindanao. A cute little play on the name, but one fondly repeated by residents to the island’s visitors.

I first heard it just hours after we landed, and again and again until it was time to leave, and I found myself repeating the phrase.

“I’ll come again to eat pastel, banh mi and everything the island has to offer.”

“I’ll come again and maybe stay for a month.”

Like the many visitors before me, I was smitten by the island born of fire the moment I saw it from the window seat of Cebu Pacific’s propeller plane. There it was, a cluster of great and historic volcanoes nestled on an island. And just a short distance off its coast was the famous sandbar called White Island, its pristine white sand a stark contrast to the blue sea.

Camiguin, the island of 14 volcanoes, sweet lanzones and soda water, reopened to tourists in October. The local government later on dropped the reverse transcription-polymerase chain reaction (RT-PCR) test requirement for fully vaccinated visitors, just as Cebu Pacific’s maiden flight landed on the island on Nov. 15. (See sidebar on C2 for the requirements to enter the island.)

The volcanic island has been a popular tourist destination for divers, thrill seekers and beach lovers before the pandemic. In 2019 alone, Camiguin saw over 700,000 visitors, and was expected to welcome 1 million more tourists in 2020. (Boracay, a relatively smaller island, used to have as much as 2 million visitors per year.)

Before travel was halted, visitors would fly to Cagayan de Oro or Cebu to connect to Camiguin, but many travelers have been asking for direct flights from Metro Manila to the island, said Carmina Romero, Cebu Pacific director of corporate communications.

“As we emerge from the pandemic, and as we rebuild our network for domestic leisure travelers, Camiguin is an ideal destination given the scenic sites, and safety and serenity in Camiguin. We believe that travel recovery will begin at home, and Camiguin will likely be one of the favorite destinations for Filipino families,” she added.

Since the costly RT-PCR test requirement was lifted, business is slowly picking up, according to Robert Garcia of Kurma Eco Beach Lodge. The free dive instructor said they have received several bookings a week after the requirement was dropped, but he’s also busy sending private messages to potential visitors and members of the tight-knit free diving community.

Tour guides and lifeguards who were kept off the island’s attractions for so long were also coming back to the usual tourist haunts, eager to show visitors what the island has to offer.

“It’s my first time back on this island,” said Tita Nice, one of our tour guides, as we stepped foot on White Island, a short boat ride from the mainland.

She explained that the white sandbar had in place a system of numbered beach umbrellas, which corresponds to a group’s designated space. The umbrellas were placed there to enforce distancing among tourists, but when we went there, only two other small groups of tourists were swimming by the white sand beach.

While the pandemic halted travel all over the world, Camiguin reviewed the capacity of its tourist spots to ensure the island’s environmental preservation. The local government and the Department of Environment and Natural Resources studied each tourist spot around the island to determine the carrying capacity, which proved to be useful now.

White Island has been limited to 150 visitors a day, while the 4.6-hectare Mantigue Island in Mahinog town had a carrying capacity of 350 visitors per day. Tourists are limited to three hours of stay, which costs P75.

Guides were also vaccinated, and “new normal” rules for mountain tourism were also set to prevent the transmission of COVID-19.

Traveling for leisure for the first time was definitely unnerving at first, especially since the farthest I’ve traveled this year was Katipunan in Quezon City (I live in Metro Manila). There were a lot of things that worried me—eating at restaurants every day, commuting with a lot of people on an aircraft and basically just exposing myself to the outside world.

But little details made the trip comfortable and ultimately enjoyable—the physical distancing, the alfresco restaurants and the absence of large tourist groups.

On Mantigue Island, where the weather was hot but the water was surprisingly cool, there were only two other groups of visitors as well as a boat carrying divers ready to explore Camiguin’s pristine underwater vistas. Even without snorkeling or diving gear, I was able to see beautiful corals, schools of fish and a blue starfish just from sitting on the boat going to the island.

It’s easy to get distracted by the alluring beauty of Mantigue Island. When our bubbly tour guide Ikoy Potrias was showing us around the island, he pointed out the designated swimming areas for guests. I wish I paid attention to him because I swam in another part of the beach to look for tropical fishes. Instead, my foot found a sea urchin that stung my toes. It wasn’t poisonous though, as the helpful lifeguards and locals and my health-care worker friends assured me.

Other popular tourist destinations in Catarman town, the old capital, were also serenely quiet. We were the only visitors in Sto. Niño Cold Springs and Tuasan Falls and again at the famous Sunken Cemetery, where locals and tourists used to have picnics by the shore and watch the sunset (the best time to go to the heritage site).

There were so many things to do in Camiguin—swim near the mangroves, snorkel, even climb Camiguin Walkway leading to Mt. Vulcan. But aside from the activities, it was also a great place to disconnect, slow down and take everything in.

We were treated to a stay at Nouveau Resort, a new beachfront resort in Mambajao town with a jaw-dropping view of the sunrise (as I was to find out the very next morning). Our group had the hotel almost to ourselves, which meant I was able to swim in the long pool with only my companions and got to hog the tipping bucket at the mini water park meant for kids.

Frolicking aside, the months have been long and stressful (it still is!) and one could appreciate just sitting on one of the resort’s lounge chairs and curling up with a good book.

“Camiguin is the most peaceful place I’ve lived in,” said Christian “Diggy” Asch, a German free diver who has lived on the island since 2000. “The helmet, you can leave it on your motorcycle [when you park] outside Gaisano.”

Many people like Asch have fallen in love on the island and have settled in Camiguin. His business partner, Garcia, was a city boy until years ago when he went to the island for a vacation.

“I don’t think I’m ever going back to Manila,” Garcia said.

It’s exactly how I felt, too, while heading to the airport. Five days in the underrated tropical paradise was not enough. I kept thinking of going back (and bringing my dogs with me), of free diving, of the sea urchin that stung me (and hoping it was OK) and all the places that I have yet to discover.

Camiguin left me with a major hangover, and I’m thinking the only cure for this withdrawal is to come again. INQ