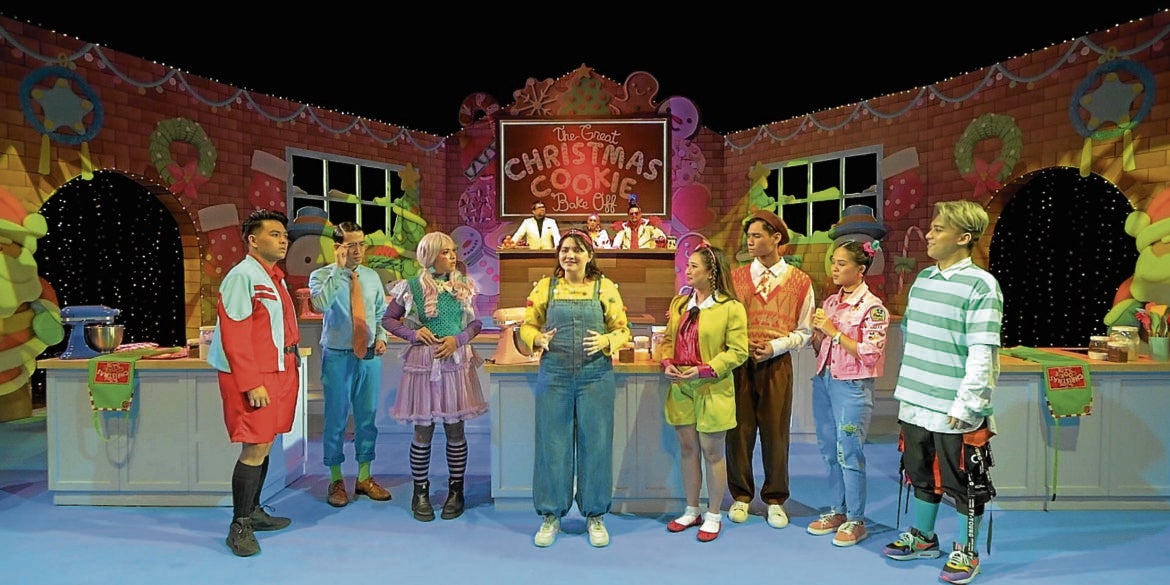 A scene from “The Great Christmas Cookie Bake Off!” —REPERTORY PHILIPPINES

The Christmas cookie is the center of Repertory Philippines’ (Rep) first original musical made for international streaming, almost a tribute to the baking spree that Filipinos had during the lockdown.

“The Great Christmas Cookie Bake Off!,” with book, music and lyrics by Broadway musical director Rick Hip Flores, runs for over an hour, and the “Filipinized” adaptation is directed by stage veteran Joy Virata, Rep Theatre for Young Audiences creative director.

Rep, the company, has been around since the 1960s and has produced plays spanning five decades (459 productions!). The team knows the formula in staging musicals that appeal to both children and their parents, such as “Scrooge,” “‘Rapunzel! Rapunzel! A Very Hairy Fairy Tale” and “The Quest for the Adarna,” but the challenge now is delivering it online.

“I wrote the show just about a year ago when I felt like we needed a little bit of joy in our lives,” Flores said in the virtual launch. He said the combination of Christmas, cookies, high-energy baking contest and musical theater could be “the perfect recipe for a truly joyful theatrical experience.”

Together with other plays around the world, “The Great Christmas Cookie Bake Off!” is streaming on the Broadway on Demand website (broadwayondemand.com) until Dec. 12. Tickets are available at P700 for a 24-hour access and P1,000 for 48 hours (tel. 0966-9054013; [email protected]), and sold on the following websites: Broadway on Demand, TicketWorld and Ticket2Me.

“The Great Christmas Cookie Bake Off!” is a baking competition among eight competitive rookie chefs—well, except for one who just wants to get it over and done with. At the Cookie Coliseum, they have to win challenges and impress the judges to win the P50,000 cash prize to kick-start the publication of their own cookbook, and a trip to Florida.

The show opens with the hopefuls singing to hype themselves into winning. Hans Eckstein as host Larry introduces them. Virata changed the names and locations of the contestants to make them relatable to the Pinoy audience.

Becca Coates is the kind home baker Patty Mañosa from San Fernando, Pampanga, who learned how to bake from her grandma who passed away.

Rachel Coates is the social media-savvy Samantha Lopez from San Lorenzo Village, Makati, who wants to win to be a famous food influencer.

Jep Go is the bully Gabe Gomez from Malate, Manila, who is backed by a powerful network executive dad. He’s effective but his bedimpled boyish look kind of de-bullies his character.

Jillian Ita-as is the overachieving perfectionist Anna Santos from Urdaneta Village, Makati City, who “strives for perfection every time.”

Perhaps many kids can relate to Tim Pavino’s Javi Carreon, a gamer from Cebu City who likes books and picked up baking only when he got bored during the quarantine.

Luigi Quesada plays Julian Zamora from Lipa, Batangas, a snooty culinary student on a full scholarship who believes that “culinary arts should be taken seriously.”

Justine Narciso is Amy Garcia from Quezon City, the cute Disney fan who has seen “all Disney movies over 100 times.”

Completing the eight bakers is Steven Hotchkiss as Josh Bernardo from Davao, the geek who wants to prove that he can win a baking gig through science, since “baking is nothing but simple chemistry.”

The catch: They have to cook the best cookies incorporating a secret ingredient that will be announced only before the event.

The musical was shot onstage, and Rep used green screens and split screens to highlight transitions, and animation to showcase the baked goods. Since it’s a one-day elimination competition, there was no need for elaborate set or costume changes.

Carla Guevara-Laforteza plays three roles, showing her range: as food diva Isabel Guevara who makes edible fashion, Anna’s tiger mom and Patty’s sweet grandma who always reminds her apo that the fun in Christmas baking is sharing, “so make enough for everyone.”

“Bake Off” discusses friendship, handling competition, facing fears and forgiveness. It shows kids that getting anxious and feeling like they don’t belong are normal. It also highlights the message that it’s OK not to be perfect, whether in academics or baking. As the grandma said, “That’s the magic of Christmas; it’s what in in your heart that’s makes it perfect.” It’s also a lesson for parents to listen to their kids.

“The Great Christmas Cookie Bake Off! is the first Filipino production on international online streaming service,” Virata said. “Rep is beyond honored to bring the magic of theater and Christmas to your homes and make this season a bit brighter and merrier for everyone.”

As a premier online production, Rep’s “The Great Christmas Cookie Bake Off!” pulled it off. The company brought children’s theater to global homes, starting with a simple story with sweets as theme, which was smart because what’s more visually appealing than dessert? Save for some dragging bits, “Bake Off” sets a precedent on what Rep can offer until or even when live theater is back.

“We had to go dark because of the dreaded virus, and we’re still dark onstage, but emerging with a big bang on our first-ever attempt to produce a full-length musical for kids, students and their families for Christmas,” Rep president and chief executive officer Mindy Perez-Rubio said during the virtual press launch.

“It’s a handful of a title, I know, but it led Rep to be the first Philippine theater company to build a show for streaming on an international platform.”