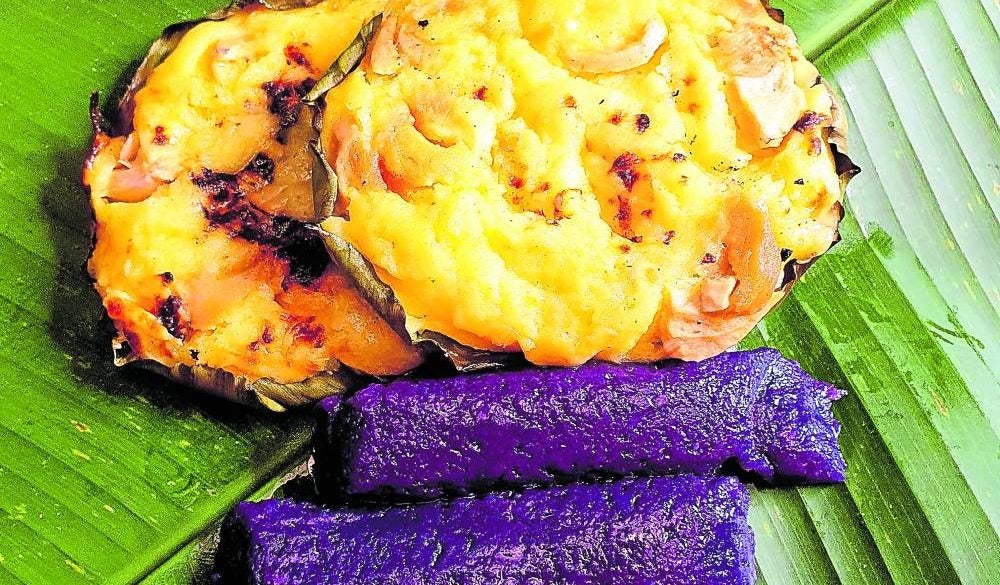 “Puto bumbong” and bibingka, the most beloved of holiday “kakanin”

What you didn’t know about bibingka and ‘puto bumbong’

I called food historian and award-winning author Ige Ramos to congratulate him on the victory of his book, “Dila at Bandila,” at the 2020 Gintong Aklat Awards. After exchanging pleasantries, our conversation drifted to Christmas and food associated with the season.

Collectively, we always try to find meaning in what we do, said Ige. We start certain things that through time become the norm, and later, a tradition.

The bibingka traces its roots to bebinca, also known as bibik or bebinka, a traditional 16-layer cake served at Christmas time in Goa, India.

Bebinca is made with flour, yolks, sugar, coconut milk and ghee, and spiced with nutmeg. The cake, which is more like a pudding, is tedious to make as it is cooked layer by layer.

It is believed that the bebinca was most likely brought by the Portuguese traders to the ports of Macau from Goa, and through Sumatra, to the various trading posts in the Philippines.

Our rendition of bibingka in the olden days was a flat cake made with ground glutinous rice and water. In some places, tuba was added to aid in its fermentation. It was devoid of frills, sans its toppings.

Eventually, eggs were added. It became the spongy, cake-like bibingka we know today, during the American occupation, when baking powder was added to it. It was also around this time that sugar was added.

Growing up, I remember buying it around the plaza and in front of the church in Agoo, La Union. It was cooked in a terra-cotta pot, with charcoal under, and if memory serves, a makeshift “broiler,” made from an empty milk can with charcoal in it.

Freshly cooked, the cake was slathered with margarine and sprinkled with white sugar and niyog. It was simple yet delicious.

Aside from the emergence of the terra cotta, the bibingka’s cooking vessel, location played a major role in its evolution.

In Pateros and Laguna, where duck eggs are plentiful, duck eggs were used in the batter and its by-product, salted eggs, as toppings.

In Cavite, where Ige grew up, the presence of Sangley Point, a US military base, led to its capping with processed cheese.

Of course, Via Mare’s Glenda Barretto romanticized it by adding kesong puti and lots of quality butter.

Not unique to PH

The Christmas experience would be incomplete with bibingka alone. With it should be the puto bumbong, said to have existed even before the Spanish occupation.

Ige was quick to note that the delicacy is not unique to the Philippines but prevalent in maritime Southeast Asia.

It exists in Indonesia, Malaysia, Singapore and Brunei, and is also known as putu bambu or kueh bambu.

Depending on where it is made, the main ingredient is always glutinous rice in white, black or purple varieties, and almost always cooked in bamboo cylinders that whistle in a unique way when the rice cake is cooked.

Our puto bumbong was traditionally made with pirurutong rice from the Cordilleras, Central Luzon and Southern Tagalog, places where strong “celebratory” rice traditions abound. It was traditionally partaken of during religious celebrations.

Ige added that we ascribe meaning to a particular food that is seasonal. As such, when Christianity became our main religion, the puto bumbong became a symbolic treat to make people understand the meaning of Advent and/or Christianity, since purple is the color of Advent.

Add to that the fact that the stalls where it was cooked were all situated near a church, and the cylindrical kakanin feasted on after simbang gabi.

In the olden days it was made with pure pirurutong.

To cook it, the bamboo tubes were brushed with coconut oil from the latik, then once again brushed after cooking with the same, sprinkled with latik and panucha.

As pirurutong became rare, it was replaced by glutinous rice, finely ground to make galapong. Then an even easier way of making it became possible by using Thai glutinous rice flour.

In the ’90s the cylindrical rice cakes further evolved with the addition of various flavored food, the reason many modern puto bumbong exude a hint of ube.

The toppings have also become more elaborate. Butter took the place of margarine, and grated cheese, sesame seeds, even leche flan can be found sitting atop the kakanin.

Put ground pirurutong in katsa and weigh down with a rock to extract liquid, or you may squeeze dry.

Enriched with rice bran Tikitiki, developed by Maria Y. Orosa in the 1920s

Grate coconut and extract milk with ½ cup of water. Set aside. Strain.

Continue to extract milk from coconut with 3 cups of water, using 1 cup per extraction. Strain.

Add 1 cup of brown sugar and bring to a boil. Strain again.

Add malagkit rice, salt, flour and cook in a pan until the rice is soft.

Line a bibingka mold with banana leaf and fill with the rice mixture to ½-inch thickness.

Dissolve remaining ¼ cup brown sugar in the milk first extracted from the grated coconut. Add the powdered anise, and pour this over the rice mixture. Cook as you would bibingka.