Azkals star Neil Etheridge is a keeper, on and off the field | Lifestyle.INQ ❮ ❯ 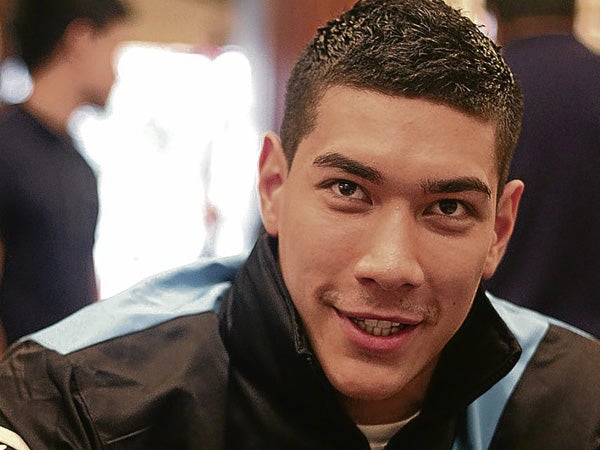 Azkals star Neil Etheridge is a keeper, on and off the field 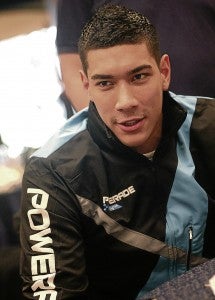 Thanks to their jaw-dropping exploits in the 2010 AFF Suzuki Cup, the Philippine Azkals have made basketball-crazy Pinoys sit up and take notice of football… and of the players themselves. For his part, Neil Leonard Dula Etheridge has pretty much stood out from day one, and it’s not just because of his height.

At 6’3”, the British-Filipino footballer has proven that he’s got mad skills to go with his impressive height, earning him nicknames such as “The Bus” and “Tower of Power.” He currently holds the position of first choice goalkeeper for the Azkals while also playing for Fulham FC back in London.

Throw in clean-cut good looks, a lean build and a silky English accent to match his stellar sports record, and he’s got the complete package. And to think he’s only 22.

That’s why he was chosen to be the newest endorser for Powerade ION4, the “complete sports drink” that contains four key electrolytes compared to the usual two. He joins award-winning runner and coach Rio de la Cruz, fitness maven Chinggay Andrada and champion basketball player David Semerad to complete the brand’s dream team of ambassadors.

After the press and blogger meet held recently at Makati Shangri-La Hotel’s Makati B Function Room, 2bU got to know more about Neil beyond the sports star status. He’s pretty sensible, focused and goal-oriented for his age; while he sheepishly admits he doesn’t speak the language very well, he’s taken it upon himself to learn Filipino no matter what.

“I told myself that I can’t take the captain’s armband unless I can speak the language to a certain satisfaction. I figured that it’d be disrespectful,” he explained. More trivia: His mom hails from Tarlac, he doesn’t want to join show biz, and he’s only got 8.4 percent body fat. No, seriously.

What got you started in football? Have you always wanted to be a goalkeeper?

No, I used to be an outfield player. I guess when you grow up in England, football is a general thing to do with your friends. You always try different positions and I really enjoy playing goal, so I kind of stuck at it. I think I was about the age of 12, because I liked to play a lot of tennis as well, and my parents said to me, “You’re going to have to make a decision on whether to play football or continue playing tennis.”

As good as I was at tennis, I’ve always had this certain passion for football; with a bit of luck and hard work, I am where I am right now.

What inspired you to become a professional football player?

So many things. I guess I was just lucky to have a talent for playing football, and I just worked hard at it. I think no matter how talented you are as a person, you’ll never get anywhere 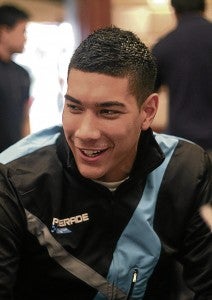 without hard work and respect for other people.

Do you still play tennis on the side?

I’m really competitive. So if I ever play tennis, I’ll get really competitive about it. On my days off, I like to play golf. If I’ve got time, usually it’s just relaxing with my friends, seeing family, go shopping…

What do you shop for?

I’ve got a pretty impressive shoe collection; I’ve got over 50 pairs of shoes and trainers! (Laughs) Yeah, shoes, clothes… I wouldn’t say that fashion is my strongest point, but I like to keep up with it and see what people wear. Given my size and how tall I am, usually it’s hard to pull off some stuff, to keep up with the fashion. But I have a lot of respect for it, and I like to go shopping and see what’s out there.

How often are you in the Philippines?

It really depends on games. Every summer, every off-season, I come back. And this summer as well; in fact, I’m actually flying a lot of my friends over with me. It’s kind of them entering my world and seeing as much as they can see. I’ll take them to Boracay, Cebu, Palawan and all these places. They’ll be interested to see how things are in Manila, you know, I guess people recognizing me is unusual for them. (Laughs)

Have you ever been mobbed by fans?

A few times. For example, after games. I wouldn’t say mobbed, but respectably asked for pictures and autographs, which is nice. These are the people who watch us and really support us, so I have a lot of time for those people.

I can’t really look at my Twitter as often as I’d like to; it’s hard to get back to everyone. Maybe if I’m on the coach or on the way to a game or hotel, I’ll try to sit down and respond to them. With the time difference, it’s always hard. I do as much as I can.

If you weren’t playing football, what would you be doing?

I like business… I guess it’s a bit of a strange one. Even being a football player now, I’ve always looked to invest in businesses in the future. I’d like to run a clothes store, or probably open a restaurant. All these things obviously come much later on, but I’ve always had that side to me. I know it’s a risk, but I like to take that sort of risk and make people happy. This is definitely something I’d look to in the future.

What’s the Pinoy part of your upbringing?

I guess it’s the pride. I was an only child, but I was never spoiled. I’ve always learned that if I want something, I have to work for it. Now I’m in a situation where I could give back to my parents, and I’m happy to do such a thing. Even to the fans and the people who have supported me, my friends, my family and supporters, I just want to give back as much as I can.

Any advice for kids who want to grow up to be like you?

Enjoy your sport. Enjoy your youth, I guess. I remember when I was 16 or 18, people were saying the same thing to me, and I wanted to grow up; now I’m 22 and I wish I was back there! I know I’ve got a long way ahead of me, but I’m at that stage where I’ve grown up quite quickly; I’ve kind of had to. But I try to cling on to my youth as much as I can.

Also, stay happy, and stay out of trouble. You only get one life and you don’t want to ruin it or make too many mistakes that you can’t redeem yourself.

To be the best player I can be.