I took my first leave from DOT for BTS | Lifestyle.INQ ❮ ❯ 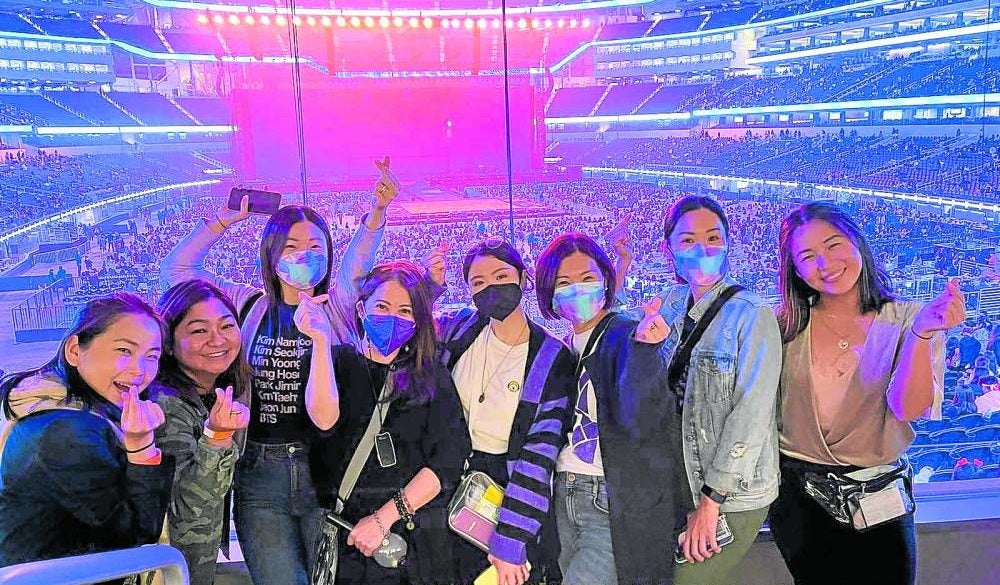 I took my first leave from DOT for BTS

I know I’m not the only one to say that the Korean group BTS has helped me get through the emotional turbulence that the pandemic has wrought. Their songs have given me hope, inspiration and focus as we, in the Department of Tourism (DOT), are helping steer the country’s tourism industry toward recovery.

Although I am a rather late convert, the boys came into my life at a time when I needed their brand of pop positivity the most.

It was around September this year, and new COVID cases were peaking at over 20,000 a day. We were still at the highly restrictive level of alert level 4, and, of course, tourism destinations were closed yet again. The DOT was racing against time to get as many tourism workers around the country vaccinated. There was one trip where National Task Force Against COVID-19 Chief Deputy Implementer Secretary Vince Dizon and I flew to Puerto Princesa, El Nido, San Vicente and Coron—all in one day—to roll out the jabs.

One day, a friend from one of my Viber groups sent a link to a video called “Permission to Dance.” At the time, I only knew of BTS as a Korean boy band that my daughter Maia has been following since 2016. But I gave the song a listen, and immediately it was like a ray of sunshine beamed straight into my heart: “We don’t need to worry/ ‘Cause when we fall we know how to land.”

I did a deep dive into their music and discovered that they had written several songs about the pandemic. On “Fly to My Room,” they sing in particular about the inability to travel anywhere, apart from their rooms: “It’s so frustrating, it’s driving me crazy / Feel like it’s still day one / Somebody turn back the clock /The entire year got stolen.”

The seven members are not just good-looking and talented, are also entirely relatable, endearingly wholesome and occasionally goofy in the way Pinoys can totally appreciate.

Then I saw the speech that they gave at the 76th United Nations General Assembly. The band had been appointed by South Korean President Moon Jae-in as the Presidential Special Envoy for Future Generations and Culture. And even though they spoke particularly about the younger generation, they captured the sentiments, frustrations and hopes that so many people felt, including this tita.

I was impressed with how they tied things in with climate change and the importance of vaccination, and I was moved when they portrayed the younger generation as the “welcome generation.”

I thought about my own children, who were affected by the pandemic in different ways, and knew that BTS spoke the truth—even though my kids and their peers had missed out on a not-insignificant chunk of their young adult years, they were not “lost”; in fact, they had gained a greater clarity of purpose and resolve to help make the world a better place.

I took my first personal leave since I joined the DOT in 2018, and joined Army Bomb-waving fans to watch the band give a performance of a lifetime in Los Angeles.

It’s true what they say about the BTS fandom—it’s a phenomenon unto itself, and when mobilized for good, it can do powerful things. I felt an engulfing sense of community, love and happiness, and if one band from a small country can create all this, it gave me hope for our country (and indeed, just last Dec. 7, P-pop group SB19 knocked out BTS’ “Butter” off the No. 1 spot in Billboard’s Hot Trending Songs chart).

I’m still lingering in the afterglow of the “BTS Permission to Dance” extravaganza, which has given me a much-needed recharge to face the coming hurdles. Just when we were about to welcome fully vaccinated foreign tourists back to our shores, Omicron sprung like an unwanted pop-up ad. Border controls had to be tightened yet again.

“There’s always something that’s standing in the way/But if you don’t let it faze ya, you’ll know just how to break.”

But on the bright side, we are at the lowest levels of COVID-19 cases since the beginning of the outbreak and domestic tourism levels are on the rise, and for that I am thankful.

“The morning will come again/ No darkness, no season can last forever.”

One other takeaway from all this BTS madness is that I really got to bond with my daughter. Although we have different biases—that’s K-pop-speak for favorite member—we now share a common love for something that got us through this difficult time. —CONTRIBUTED

The author is the Secretary of the Department of Tourism.