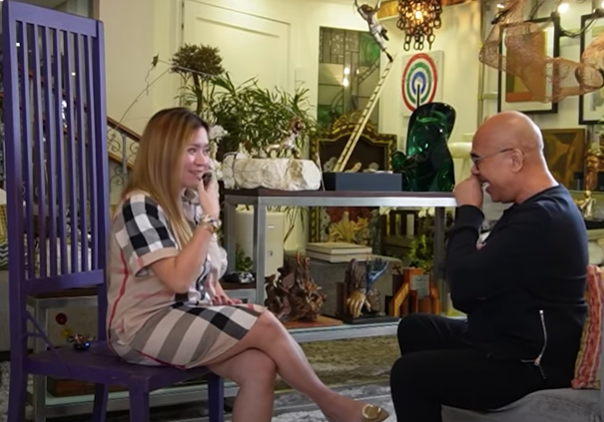 Singer Angeline Quinto finally addressed rumors of her being pregnant which has been talked about in muted conversations in showbiz circles recently.

Quinto’s admission came right on the heels of her tenth anniversary in showbiz, during her appearance in “The Purple Chair Interview” with King of Talk Boy Abunda, released on his YouTube channel last Friday, December 10.

She admitted knowing about her condition last September when she had a pregnancy test.

(Tito Boy, I was afraid at first, to be honest, I don’t even know how to figure out the positive and negative in a pregnancy test because I’ve been used to swab.)

Recalling the moment she took the test, she said she stayed in the comfort room longer, thinking whom she will tell about her condition later. She told her manager about her situation first, and then her boyfriend who get her pregnant.

(At home, I didn’t tell anyone immediately, because I was afraid. First, with work. How will I tell it to the people I work with? But aside from that, about the fear of becoming a mom or to have a baby, I didn’t have that.)

When asked if she immediately tell her boyfriend about her situation, she said no, adding that it took her two days to inform her boyfriend that she’s pregnant.

(When I showed him the photo of my pregnancy, he said, “Are you positive? Does ma’am Kate already know?”)

Her boyfriend was apparently worried about her work and how she would tell people around her about her situation.

As to speculations that she’s a lesbian, Quinto believes she’s been labeled as such because of her “boyish” demeanor.

(I have really just been boyish since way back then. Maybe they just misinterpreted it. They say that KC Concepcion was my lover. That was the first news that came out after I won.)

Speculation on Quinto’s pregnancy came after she posted a cryptic message on her Instagram page on Nov. 6, which said, “New life, chapter one.”

Quinto refused to name the non-showbiz guy who got her pregnant. Instead, she just told Abunda that she met her through a friend who lives in Sampaloc, Manila.

Quinto admitted that the guy’s situation is complicated because he has a child from a previous relationship but she stressed that he’s not married.

(When we saw each other once, we had communication and it went from there. We’ve been together for more than a year now.)

Quinto is celebrating her tenth anniversary through “10Q,” an anniversary concert series composed of ten shows to be held at the Manila Metropolitan Theater from October to February, and through the digital platform ktx.ph. JB

Angeline Quinto admits she and Erik Santos tried being a couple