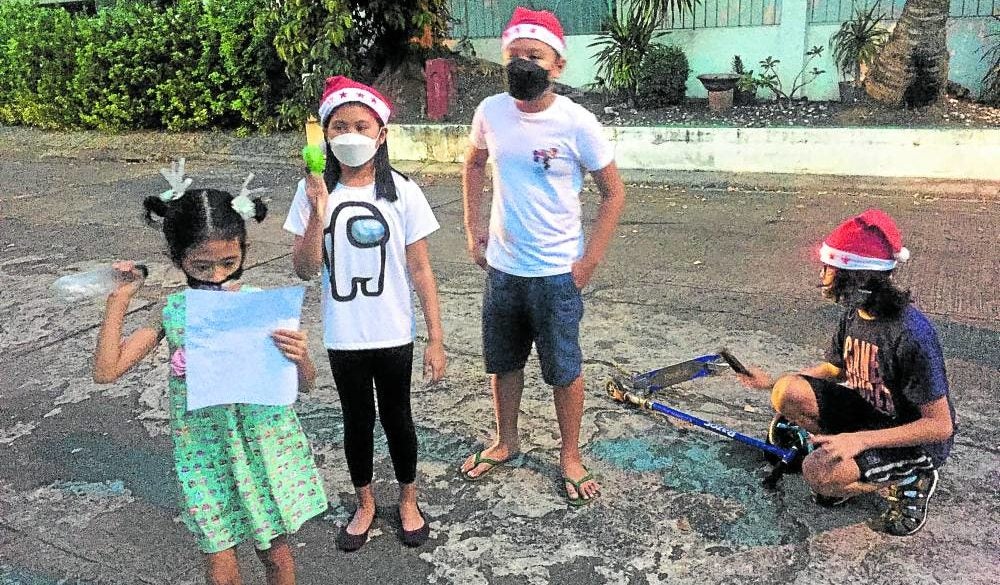 The kids are fired up every afternoon, trying to think of new ways not only to amuse themselves for their benefit but to innovate and do better, taking pride in what they do.

Our neighborhood’s gang of do-gooders

Midway through this afternoon’s “outside time,” my 10-year-old Jack scootered home to say, “I’m gonna start a weeding business with my friends, Mom! We’ll charge P30!”

“Cool,” I said. “But that’s too cheap and you’re allergic to grass.”

At dinner, he proudly flashed a P100 bill.

“Wow, how many yards did you do?” I asked, ashamed of being such a Negative Nancy before.

“Because I asked what the brand was, and he said it was Minute Maid, so I said no.”

“Did he wonder why?”

“Yeah, so I told him because I’m vegan and there’s fish in it. He couldn’t believe it when I told him to read the ingredients.”

“Aww, I’m proud of you,” I said, between mouthfuls of Greenery Kitchen vegan lomi.

“Then I asked if he wanted to learn more about veganism and he said maybe another time.”

I almost snorted out my lomi.

He said, “Because I told everyone about the old lady who feeds stray cats who couldn’t pay for her bills.

So I said we should give her money. At first, we were gonna give it all but the man who paid us said we should keep some, so the four of us decided to get P100 each then give P600 to the old lady.”

I didn’t realize what an impact it had on Jack, seeing me write out the association’s monthly statements of account for our section of the village.

My husband Jason is the street director of our area so I help him with the back-end stuff. Jack had asked how come others don’t get any slips at all (they paid annually in full), while others had larger or smaller bills. Our elderly neighbor was behind by almost two years.

Here I was fearing he might be getting too self-centered with computer games, YouTube and being sheltered from ‘the real world,’ yet there he was making a difference where he can.

“I wanna help, too!” my 6-year-old Juno whined, but her kuya reasoned she was too little to join the older kids. They added car washes to their roster the next day, but none of our neighbors were that brave.

So, to include the younger members of the neighborhood’s growing gang of do-gooders, they diversified into caroling as well. Not every gig converts to cash, but they don’t seem to mind. They also decided to give 100 percent of their caroling earnings for the old lady’s fund. They don’t advertise this; they just do it.

Having done years of grunt work for the association, we’ve had our share of Scrooges, so experiencing such open-handed generosity from these children really makes the thankless job worth it.

The kids are fired up every afternoon, trying to think of new ways not only to amuse themselves for their benefit but to innovate and do better, taking pride in what they do.

One night, they made their own instruments filling plastic bottles with pebbles; they donned light-up Santa hats the next.

They watched the videos we’ve taken of them to see what they did right and how they can improve next time, such as memorize the lyrics, make sturdier paper antlers and make their poster clearer and more colorful.

I admire how they don’t overthink and just do, tweaking along the way, not getting bogged down by perfectionism or how they’re “just kids” playing in a pandemic.

Dr. Jonas Salk, who discovered one of the first effective polio vaccines, said, “The reward for work well done is the opportunity to do more.”I need only turn to my parents to see what great examples they have been for me and my siblings, but now, my children and their friends are inspiring me, too.

“To give not until it hurts, but until it stops hurting,” I once read in an Our Daily Bread meditation.

These children’s beautiful example makes us aware of our chances to serve and share.

But more importantly, we need to be mindful of how much they really absorb and learn from us, too.