Beats, soul, and all that jazz at Malasimbo | Lifestyle.INQ ❮ ❯ 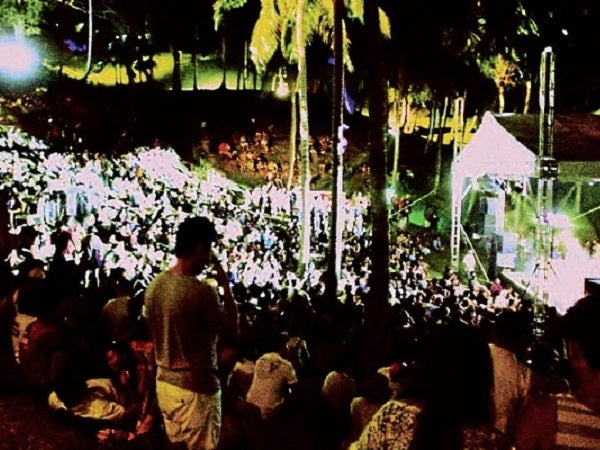 Beats, soul, and all that jazz at Malasimbo

“If they told me the only way I would get here was by swimming, I would try.” —Joe Bataan

Ever noticed how good music is always tucked away in near-dilapidated ruins that seem to be one lit cigarette away from becoming a giant bonfire?

The 2nd Malasimbo Arts and Music Festival went the other way with that concept, staging a three-day gig in a mountain setting that seems to have been lifted from a postcard. Held at the foot of Mount Malasimbo in Puerto Galera, the event was held in a natural amphitheater that was worthy of the festival’s environmental slant.

“The natural amphitheater overlooking the Puerto Galera bay, one of the most beautiful bays in the world, produces acoustics that are truly a wonder,” said Tourism Secretary Ramon R. Jimenez Jr.

According to material sent to the press, the event has been dubbed as the “Coachella of Asia.” It might still be a long way from dethroning Fuji Rock and Summer Sonic, but the festival’s line-up was definitely solid. This year’s roster featured headliners such as Joe Bataan a.k.a. “The King of Latin Soul,” Kyoto Jazz Massive, Eureka the Butcher (the electronic music side project of Mars Volta keyboard player/percussionist Marcel Rodriguez-Lopez) and former DMC World DJ Final champ DJ Kentaro.

The marquee acts didn’t disappoint. Joe Bataan, the legendary half-Filipino soul singer, was exceptionally upbeat for his homecoming gig. Aside from educating the masses on the intricacies of the boogaloo, he spoke about his Filipino father and his formative years in New York.

“He never realized his dream to come back here, but his son is here, and the Lord is with us today,” he said. The 69-year-old from Spanish Harlem had the crowd eating out his hand, rousing a subdued audience into fits of frenzied dancing.

It’s a hard fact of life; some musicians are much better live than on recordings. Exhibit A is DJ Kentaro, multiplied by a gazillion. To use a tired phrase for sounding cool, the Tokyo native brought the house down, figuratively, and to a small extent, literally. So many musicians wanted to see DJ Kentaro up close that there was a legitimate concern that the stage might collapse.

In front of the stage, among little people devoid of VIP passes, nobody left in spite of the resurgence of persistent rainfall. The idolatry was justified. DJ Kentaro was a whirling dervish, ripping through mixes of Cypress Hill’s “Insane in the Membrane” and the Beastie Boys’ “Sabotage.”

This might be the millionth article for this purpose, but high praises are in order for Up Dharma Down. The quartet is definitely one of the tightest bands around; this realization is most potent when listening to their set under freezing rain, and the good sense to seek shelter doesn’t arrive. In case documentary evidence is needed, check out what Curt Smith (Tears for Fears) and Time Asia had to say about the band.

The quartet played hits such as “Oo” and later singles such as “Sana” and “Taya.” Fun fact: There’s a pattern with the song titles, which probably went unnoticed if it hadn’t been pointed out.

Old hand Joey Ayala was the highlight of a subdued opening day. Ayala was engaging as always, producing a concoction of hits and b-sides. Some parts nostalgic, some parts rhythmically irresistible, Ayala’s set lifted an otherwise unspectacular first day.

In terms of musical discoveries, Similar Objects and June Marieezy are some of the names to check out. They’re easy enough to track down in bars around Manila. Just be sure to wear flame-retardant clothing.