Caught in the whirl of the grandest festival of the North | Lifestyle.INQ ❮ ❯ 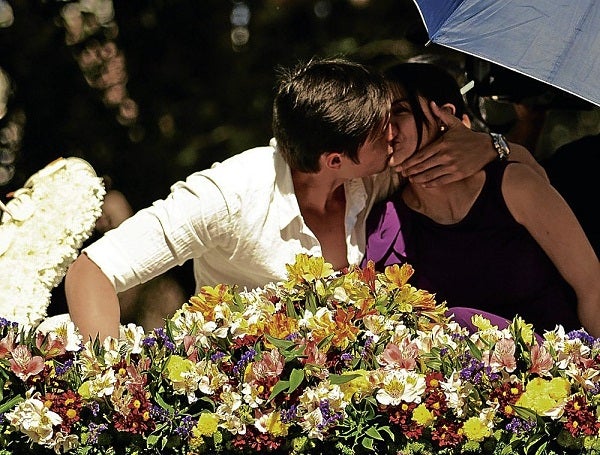 Caught in the whirl of the grandest festival of the North

Welcome to the mountains!” said The Manor managing director Heinrich Maulbecker, by way of greeting  the Manila trimedia who came over that weekend for the Panagbenga, upon the invitation of The Manor at Camp John Hay.

Which sent some into suppressed tittering. Yes, and what mountains!

We remember this place in the early 1980s when the Americans were still here, their military recreational camp at Loakan Road in Baguio, one of those hill stations in Southeast Asia.

There were three prominent structures then: the Clubhouse, the Commissary, and the wooden staff houses dotting the landscape, in uniform white-and-green (the American-colonial color, from the Philippine General Hospital to the Manila Hotel to many an old Baguio residence).

Lowlanders came here for the duty-free goods at the Commissary, and the American-size hamburger at the Clubhouse. On a mist-enshrouded night, at 5,000 ft above sea level, one couldn’t keep one’s teeth from chattering even if one was bundled up in three or four garments.

On such a night, the media gathered at the Rose Garden for welcome cocktails and dinner hosted by Maulbecker and The Manor general manager Ramon Cabrera. Laid out was a plenitude of comestibles concocted by Le Chef’s patron Billy King (not only a gourmet but also an art collector and film lover).

By early morning, still dizzy from the red wine and sleeplessness, we were trudging through the mist to Session Road. The Grand Streetdance Parade wouldn’t start until 8 a.m. but people had already been lining the streets as early as 6 a.m.

Panagbenga (Kankana-ey term for “a time of blossoming”), also known as the Baguio Flower Festival, is the grandest festival of the North. Conceptualized in 1995 by lawyer Damaso Bangaoet Jr. and designed by what is now the John Hay Management Corp., it was first staged the following year—a step in Baguio’s rebuilding after the 1990 killer earthquake that struck Luzon, to lure back tourists to the Summer Capital.

Baguio City Mayor Mauricio Domogan said they had mobilized some 2,000 volunteers for the festival this year, and budgeted P11 million (from P1 million 17 years ago).

“We [the city government and the Office of Rep. Bernardo Vergara] have raised P4 million and just hope for the best,” the mayor said with a chuckle. “We still have to collect an additional of at least P7 million from the private sector.”

Festival committee chair Anthony de Leon said Panagbenga had grown from a localized festivity into a full-blown showcase of the various festivities of the Cordillera. It took five weeks of preparation and activities leading to the last weekend of February, drawing a million tourists.

“That’s already the tourist traffic on Boracay in one year,” Tourism Secretary Ramon Jimenez Jr. pointed out, adding Panagbenga was a very touristic festival being a 360-degree spectacle.

The solid mass of spectators that weekend could be seen thronging the main sidewalks and intersections from Upper Session Road 3 km down to Burnham Park and the Baguio Athletic Bowl.

To view the parade, accredited members of trimedia had positioned among the hedges on the islands in the middle of Session Road. The rest were cordoned off as the 13 streetdance contingents and the drum-and-lyre bands passed by. They gawked and cheered from sloping side-streets while seated as if in mini-amphitheaters.

“They’re very disciplined,” observed former Tourism Undersecretary Edu Jarque. “They just stay there in their places. Unlike in other festivals such as the Sinulog, where crowds become uncontrollable and rush anywhere in the streets.”

Performances on the field could be seen only from a distance since getting near the venue was off-limits even to press photographers. Most of the 2,000 participants were garbed in traditional Cordillera attires, the male youths in bahag (loincloth or G-string), leading some wits to call their performance “butt-dance.”

Third prize went to “Life at Break of Dawn” of Baguio City National High School, inspired by a Bontoc folklore and replete with Mountain Province costumes, instruments and planting songs.

Second prize was “Kawayan” of the City Government of Tabuk, an initiation rite of a Kalinga teenage boy participated by the whole community, characterized by native dances, indigenous games and communal prayer.

First prize was won by “Adivay” of the Local Government of Kabayan, a spectacular display of Benguet culture inspired by the Ibaloi festival of harvest and thanksgiving.

The next day, we started earlier as the Grand Float Parade on the same route was drawing more spectators, and we had yet to jostle our way to our station among the hedges. The sunlight was blinding.

Ushering the parade were “Let a Thousand Flowers Bloom” streamers, followed by the contingent of city officials led by Mayor Domogan. The Philippine Military Academy color guards and cadets were aglint.

The festival theme music, composed by Saint Louis University professor Macario Fronda, erstwhile lackluster to the ears of first-time visitors, started growing on you whether struck on the xylophone or blared from trumpet or bassoon.

Popular was the Korean delegation, attired in traditional, Koreapop and taekwondo outfits. A few boys showed off their martial prowess, somersaulting on the sloping pavement to the crowd’s delight. The city has a large Korean community.

They were led by the three Hall of Fame winners: City of Baguio, with its Angry Birds and annoying green piglets; Baguio Country Club, with its “Star Wars” motif complete with storm troopers, robots, Ewoks, Jedi knights, Yoda, Darth Vader; and SM, with its Year of the Dragon theme, featuring a dragon of floral mosaic spewing smoke.

The spectators were, of course, astounded, but not as awed as when the Battle of the Networks began with the coming of their floats. The “Good Morning Club” hosts made merry on the TV 5 float.

It wasn’t until the GMA 7 float appeared, graced by Dingdong Dantes in white guayabera shirt and Marian Rivera in violet body-hugger, that the crowd really made a stir. The lovey-dovey couple demonstrated to the public how to display affection, as they kissed, in the middle of Session Road and on a float yet.

More frenzied was the reception of ABS-CBN’s rambunctious “Showtime!” hosts. Crowds went wild with the crash of cymbals, the bang of gongs, the throbbing of timpani.

Meanwhile, the real hero appeared at the tail-end of the parade: International Boxing Federation light-flyweight champion Johnriel Casimiro, looking a bit uncomfortable amid the adulating throng, alone on a float sponsored by a brand of rubbing alcohol.

There were longer lulls between the floats than the previous day, so the parade took longer to navigate the same stretch, ending just before lunchtime.

The 17th Panagbenga reached its climax Feb. 25-26, and officially ended with a closing program and fireworks display on March 4.

Secretary Jimenez said the festival was driven by five factors: as homecoming not only for Baguio folk but also for lowlanders who’ve made the city a kind of reunion place through the years; its visual fascination, in this case, the fascination with flowers; being a subject of the social media; its energy, that is, the participatory energy in any festival; and the stakeholders, particularly the business community and the LGUs.

Bangaoet noted that we had a festival for everything. It must be the animism of the atavistic Filipinos, which five centuries of Christianity have not eradicated, that makes us commemorate every object both animate and inanimate, from flowers to thunderstorm to ants to smoked fish.

Our farewell cocktails and dinner that weekend was at Little Camp John Hay, with live entertainment, a rustic atmosphere with goats and antlered deer, and a dap-ay warming the chill air.

At dawn, viewed from The Manor suite’s veranda, the magnificent outline of the Cordillera emerged on the orange-streaked horizon. As the landscape unfolded in broad daylight, one could see the rapid development taking place in the 246-hectare Camp John Hay.

A new hotel had just opened in time for the Panagbenga. Construction of the Ayala Techno Hub was ongoing. And what used to be the Commissary was now a sprawling bazaar.

We could no longer find those white-and-green staff houses. Alfredo Yñiguez III, executive vice president and chief operating officer of the Camp John Hay Development Corp., said they had to demolish those structures as most were termite-eaten, though a few they had retained for reuse.

There was no mist; instead, there was burning sunlight from a cloudless sky. We still remember the pungent, resin scent of pine trees, like incense sanctifying the place.