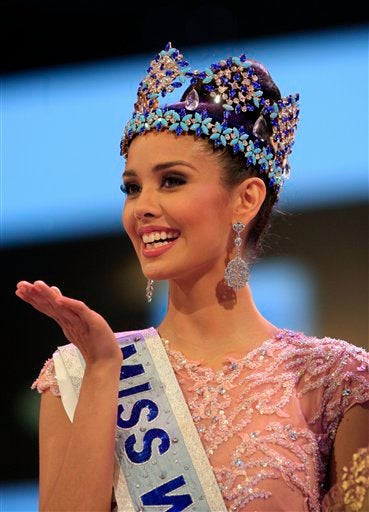 MANILA, Philippines — The Miss World pageant is the longest-running international beauty contest, tracing its roots in 1951. And throughout its 70-year history, several Filipino organizations have taken the reins in sending the Philippines’ delegates to the annual competition.

Tracy Maureen Perez, who is proudly waving the country’s flag in the ongoing Miss World pageant in Puerto Rico, was sent by the Miss World Philippines Organization (MWP), whose current national director is talent manager and entrepreneur Arnold L. Vegafria.

But before Vegafria took the mantle, several other national directors have carried the responsibility of choosing the best Filipino women to compete against other international delegates for the coveted crown.

The international beauty pageant was established in 1951, but it was only in 1966 when the Philippines sent its first representative, Miss Intercollegiate of the Philippines Vivien Austria appointed by the College Editors Guild of the Philippines (CEGP). In 1967, Filipino model Maita Gomez carried the country’s colors in the Miss World pageant.

It was in 1968 when a national search was held to choose the country’s representative in the Miss World pageant, the Miss Philippines contest mounted by The Beauty World Inc. where Cecilia Amabuyok was crowned. She went on to finish fifth in the global tilt.

In 1969, promoter Ferdie Villar staged the first-ever Miss Republic of the Philippines pageant, whose winners were sent to the Miss World contest. Under his watch, the country produced Evangeline Pascual who finished second in the international competition in 1973.

Villar relinquished the Miss World national franchise to the Mutya ng Pilipinas organization in 1977, with Peachy Veneracion assuming the national title. She, however, cut short her participation in the contest in London when the Philippine government ordered her to withdraw in support of the country’s protest against apartheid.

From 1992 until 2010, Binibining Pilipinas Charities Inc. (BPCI) Chair Stella Marquez-Araneta assumed the national directorship. Among the most popular Miss World entrants under her guidance was Ruffa Gutierrez who finished third in the 1993 global tilt, and Mafae Yunon and Karla Bautista who finished in the Top 5 in 2003 and 2004, respectively.

It was under the national directorship of Cory Quirino where the Philippines scored its first victory in the Miss World pageant. Just two years after establishing MWP in 2011, she gave the country its first, and so far only, “blue crown” courtesy of Megan Young’s victory in the 2013 staging of the international contest in Indonesia.

Vegafria took over in 2017, lumping other national titles in the annual Miss World Philippines contest, where representatives to several other international pageants were also crowned alongside the country’s delegate to the Miss World pageant.

He is currently betting on Perez to bring the Miss World crown back to the Philippines after the COVID-19 pandemic paused the international contest for a year. She is competing against 96 other international delegates for the crown currently held by Jamaica’s Tori-Ann Singh, who won in 2019.

Perez has already earned a guaranteed spot in the Top 30 when her “Para Kay Nanay” project was chosen as one of the five top “Beauty With a Purpose” entries in this year’s pageant.

The 2021 Miss World coronation night will be held at the Jose Miguel Agrelot Coliseum in San Juan, Puerto Rico, on December 16 (December 17 in Manila).